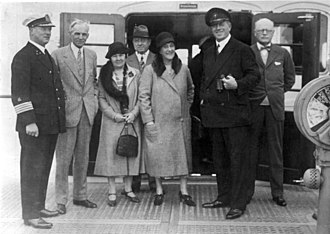 Liebold is the man behind the two women.

In reviewing my post on Henry Ford, there’s something I realize that I didn’t touch on sufficiently, and that was the influence that Ernest G. Liebold, his secretary, exercised on him. Although Ford was undoubtedly anti-Semitic without Liebold’s help, he did push him repeatedly in this direction. Journalist E.G. Pipp, who had been the editor of The Dearborn Independent before his resignation in 1920 over the anti-Semitic content being published, stated “the door to Ford’s mind was always open to anything Liebold wanted to shove in it, and during that time Mr. Ford developed a dislike for the Jews, a dislike which appeared to become stronger and more bitter as time went on… In one way and another, the feeling oozed into his system until it became a part of his living self” (Pipp). Another employee of Ford’s at the paper, Fred Black, concurred with this assessment. He stated, “If I were to put the number one blame on anyone, I would put it on Liebold” (Lewis, 138). After all, it was Liebold who had purchased The Dearborn Independent on Ford’s behalf. It was Liebold who acquired The Protocols of the Elders of Zion, an anti-Semitic forgery alleging a Jewish conspiracy to promote war and famine, for publication in that paper. And it was Liebold who hired the man who brought them to the United States!

Ernest G. Liebold was recognized for his organizational abilities as a young man by Ford’s Vice President, James Couzens, and because he was willing to do things for Ford that other leading employees were not, he was made his personal secretary. As part of his duties, he headed up investigations on behalf of Ford.

Liebold set up a detective agency that worked exclusively for Henry Ford, and hired a lot of…characters. One of the most notorious in the agency was Boris Brasol, who had immigrated from Russia to the United States in 1916 and had been a member of the Black Hundreds, a Russian nationalist group which was xenophobic and especially anti-Semitic. When a member of this group, he participated in the prosecution of the Beilis blood libel case, in which a Jewish factory superintendent was falsely accused of ritual murder. He was acquitted to Brasol’s disappointment. Brasol bragged at having written books “which have done the Jews more injury than would have been done to them in ten pogroms” (Logsdon). He intended for his writings to inspire pogroms, boasting that “There are going to be the biggest pogroms and massacres here and elsewhere, I will write and I will precipitate them” (Logsdon). Brasol brought the Protocols to the United States and presented them to intelligence officer Major Harris Ayres Houghton, M.D., and had his secretary, Natalie de Bogory, translate them into English. Brasol and Houghton distributed the work around, with Houghton himself publishing it in its English translation. It was Brasol who had given Liebold a copy of The Protocols of the Elders of Zion.

Liebold spearheaded the publication of the Protocols in The Dearborn Independent on Ford’s behalf and was the most strenuous in pushing for anti-Semitic articles. He conducted the “research” for these stories as well as The International Jew. As a result of Ford Dealerships not only selling Model Ts but also selling subscriptions to The Dearborn Independent, the newspaper went far and wide across the nation and at its peak it only had 50,000 less subscribers than the leading newspaper in the country at the time, New York Daily News. Thus, hundreds of thousands of people were sent The Protocols of the Elders of Zion when it was published in The Dearborn Independent along with The International Jew between 1920 and 1922.

Although Liebold had Ford’s trust, he didn’t have the full trust of the U.S. government. During World War I, he had been investigated by the War Department as a suspected German spy after an informant’s tip that he was caught showing the blueprints of the aircraft engine Liberty L-12, manufactured by the Ford Company for the U.S. Army, to a reporter from New Yorker Staats-Zeitung (Wallace, 25-26). He had also coordinated Ford’s abortive peace ship campaign in 1915. Although the War Department investigation turned up nothing conclusive about Liebold, whether he spied for the Germans or not during World War I remains a subject of dispute among historians who have studied Ford. Ultimately, Liebold’s influence began to decline in the late 1920s following the closure of The Dearborn Independent, but he remained with Ford as his secretary until his dismissal in 1944.

Liebold ultimately served to encourage Ford’s political habits and tendencies, and did so for the worst. He was arguably the driving engine behind the anti-Semitism of The Dearborn Independent, which spread vicious lies about Jews and he certainly pushed Ford more and more in this direction.

P.S.: There’s a bit of an amusing photo of Liebold with Albert Einstein, with the former not looking terribly pleased being photographed next to a Jew.