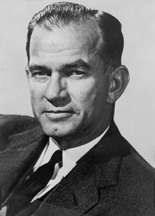 Arkansas is a state not often associated with internationalism, academic achievement, and moderate liberalism. Yet, the state has produced some political figures of great significance: Joseph Robinson was Senate Majority Leader during the New Deal and played a fundamental role in shepherding it through, Hattie Caraway was the first woman elected to the Senate, Bill Clinton was a two-term president, Rep. Wilbur Mills was a titan on tax policy, and Sen. Tom Cotton is being discussed as possible presidential material in 2024. Senator J. William Fulbright (1905-1995) fits all the descriptors of my first sentence.

In 1942, the 37-year old former president of the University of Arkansas, J. William Fulbright, won election to the House. He had been known previously as an opponent of non-interventionism, having become an advocate for multilateralism in his Oxford days. Fulbright immediately made an impact on the debates on postwar planning, coming out early and often for the United Nations. In September 1943, the House adopted the Fulbright Resolution, which encouraged the United States to participate in an international peacekeeping organization, which would later be known as the UN. This was an impressive feat for a freshman, and the voters of Arkansas recognized it: in 1944, Fulbright defeated Senator Hattie Caraway for renomination and his influence on foreign affairs grew. In his first year in the Senate he proposed the creation of an agency funded through the sale of surplus of war property to fund cultural and educational exchange between the nations of the world and the following year this proposal was signed into law by President Truman. Today this is known as the Fulbright Program, and it remains the largest educational exchange agency that has ever existed.

Fulbright and the Cold War

Fulbright, like most Democrats, supported the Truman Doctrine and the Marshall Plan. He regarded foreign aid as a means of fighting communism, including aid to nations that were poor rather than impacted by World War II under the Point Four Program. However, he proved an opponent of admitting displaced persons in Europe to the United States and backed anti-communist domestic legislation, notably the McCarran Internal Security Act. His record on Fair Deal measures was mixed.

Fulbright notably backed Truman in the firing of General Douglas MacArthur for insubordination, but he didn’t always get along personally with the Democratic presidents he served with. He for instance headed up an investigation into Reconstruction Finance Corporation corruption during Truman’s presidency, with him calling Fulbright in response an “over-educated Oxford S.O.B” (Lauter & Folkhart) He also gave Truman some un-sage advice after the Democrats lost the 1946 midterms, arguing that he should resign as happened in British politics with a Prime Minister. Since Truman had no vice president, this would have made Senate Pro Tem Arthur Vandenberg, a Michigan Republican, the president. Truman publicly stated that Fulbright didn’t know his American history, and behind his back he referred to him as “Senator Halfbright”, an insult that both Joseph McCarthy and LBJ would employ.

Senator Fulbright was an anti-communist and voted for the McCarran Internal Security Act, but he came out early and often against his demagogic colleague from Wisconsin, Senator McCarthy. He was so opposed to him and his political style that he was the sole senator to vote against funding of his subcommittee. Like all voting Democrats in the Senate, he voted to censure him in 1954, which curbed his influence until his death in 1957.

The Ideology of Fulbright

Senator Fulbright is not necessarily the easiest politician to place on an ideological scale. His MC-Index score is a 28%, but Americans for Democratic Action thought him a moderate given their scoring, and, without counting absences, his scores ranged from 17% to 92% on their scale. On foreign policy, Fulbright could be relied on generally as a liberal vote while on domestic policy he balanced out his beliefs and those of his constituents and could sometimes side with the Conservative Coalition. This leads me to the issue that prevented him from ever considering a presidential run and the issue that is a black mark, so to speak, on his record.

Race, the Reality of Arkansas Politics, and Fulbright’s Faustian Bargain

Fulbright, as an Oxford educated man, Rhodes scholar, and former president of the University of Arkansas, it was rather hard for political observers to believe that he really believed in segregation. Whether he really believed in it or not, the politics of Arkansas made it impossible for him to not vote for segregation. As Senator George McGovern (D-S.D.) noted, “He rationalized his position by saying that he had a powerful position from which to influence U.S. policy and that raising his voice on behalf of civil rights legislation wouldn’t accomplish much since the Southern position was doomed anyway… somewhat painfully, I have to concede he probably made the only choice that was open to him” (Lauter & Folkhart).

In 1956, he signed the Southern Manifesto along with every other member of Arkansas’ delegation. He also subsequently voted against all civil rights legislation in the Eisenhower, Kennedy, and Johnson Administrations. Arkansas was, after all, the state that President Eisenhower sent federal troops to in order to enforce desegregation.  However, there was evidence that he was more moderate than many other Southern senators on race.

Fulbright was not averse to voting for federal nominees who happened to be black. Unlike many of his Southern colleagues, he voted for the confirmation of Thurgood Marshall as the first black justice in 1967, and in 1970 he voted to extend the Voting Rights Act of 1965. Compared to his Arkansas colleagues on civil rights, Fulbright looks good, but compared to his colleagues across the nation, he looks bad. Fulbright, in effect, made a Faustian bargain: he had to vote against civil rights legislation until 1970 to attain the level of power and prominence that he did. Although he was no racial demagogue and tended to stay out of debates on race, he had to tow the line.

Fulbright was the longest serving chairman in history of the prestigious Senate Foreign Relations Committee from 1959 to 1974, and although in 1961 he had been offered the post of Secretary of State, according to Arthur Schlesinger Jr., “I asked why Rusk had finally emerged. Elizabeth said, ‘He was the lowest common denominator.’ Apparently Harris Wofford succeeded in stirring the Negroes and Jews up so effectively that the uproar killed Fulbright, who was apparently Jack’s first choice” (98). That year, he stated two weeks before the construction of the Berlin Wall that “I don’t understand why the East Germans don’t just close their border, because I think they have a right to close it” (Congressional Record). In 1962, Fulbright was briefed on the Bay of Pigs operation, and advised Kennedy not to go through with it, but he didn’t heed his advice and the operation ended in disaster. During the Cuban Missile Crisis, however, he took on a hawkish position to the Soviets.

Fulbright, the Vietnam War, and Jackson-Vanik

In 1964, Fulbright shepherded the Gulf of Tonkin Resolution through the Senate, but this came to be his greatest regret. He began criticizing Johnson at hearings on the Vietnam War in 1966 and this greatly upset him as the criticism of the chair of the Senate Foreign Relations Committee lent the peace movement a credibility that student demonstrations could not. Fulbright subsequently wrote The Arrogance of Power (1966), a collection of his lectures critical of the Vietnam War. He also was critical of the Nixon Administration’s prosecution of the Vietnam War, including the administration’s expansion into Cambodia. Fulbright advocated and voted for the Cooper-Church Amendment ending the Cambodian expansion and prohibiting any expansions of troops outside South Vietnam. As a result, he became popular with young voters.

Although Fulbright disagreed with Nixon on Vietnam, he agreed with the Nixon Administration in its opposition to the Jackson-Vanik Amendment, which restricted the president’s ability to grant most-favored nation status to nations that restricted emigration. This was aimed explicitly at the Soviet bloc, and Fulbright regarded this as overly idealistic. However, Congressional support was too strong and overcame Nixon’s and Fulbright’s objections.

In 1974, Fulbright lost renomination overwhelmingly to Governor Dale Bumpers. Bumpers was more liberal than him and the face of the New South Democrats, who were overall moderately liberal and sought to form multiracial coalitions. Given the growth of black voting in the Democratic Party, Fulbright’s history of voting against civil rights helped his defeat. Fulbright ultimately inspired a number of future leaders, most notably President Bill Clinton, who considered him a friend and mentor, and his legacy continues to this day with the Fulbright Program.

Author’s note: My grandfather met and casually befriended Senator Fulbright when he was in the State Department. He thought he was a nice guy, didn’t think the most of him on intellect, and noted that he was a publicity hound as he would never pass up the chance to shake hands with a homeless person if he saw reporters with cameras around.

One thought on “J. William Fulbright: The Face of Postwar Internationalist Consensus Politics”