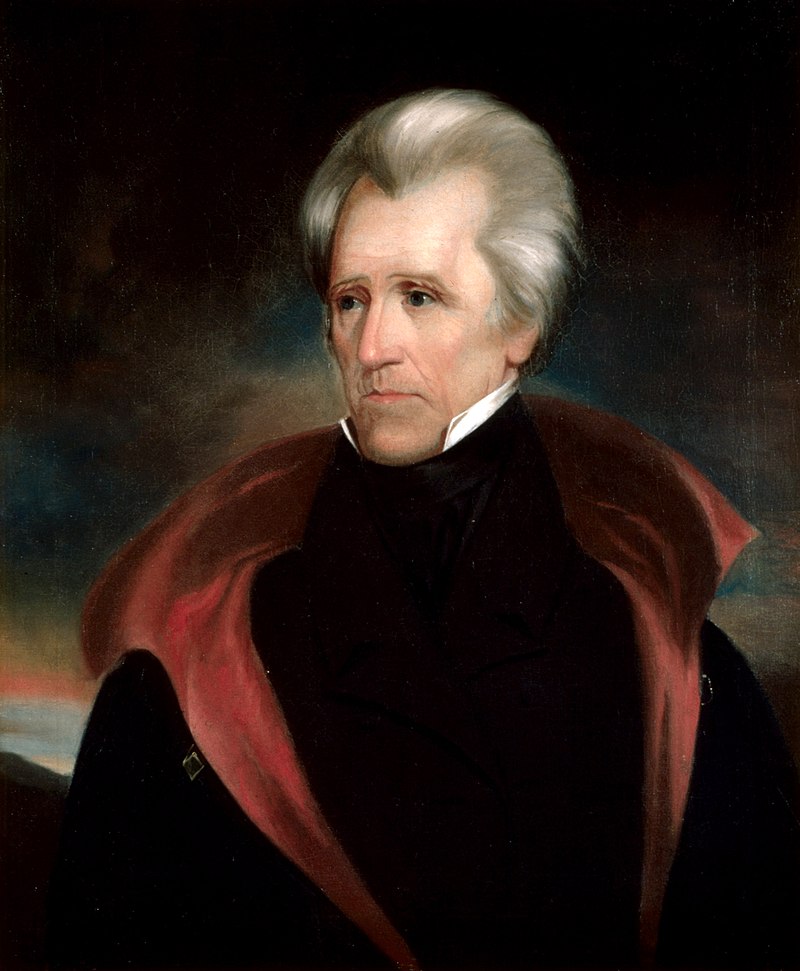 Although the term state’s rights is commonly associated with the political right in the United States and indeed most conflicts that have involved states vs. feds in recent years have had the right on the side of the states. However, this isn’t a rule and the earlier history of state’s rights proves it. The original advocates of state’s rights were Jeffersonian and Jacksonian Democrats. The Federalists and Whigs believed in an active federal government to help the nation grow. This meant infrastructure projects such as bridges and canals so commerce could expand and permitting companies to form in multiple states. They viewed the federal government as a cooperative helper to business, not as a check on its power. The Federalists and Whigs were the supporters of the growth of corporations and the Jacksonians regarded state’s rights as a useful tool to combat such a growing power that Jackson and his supporters viewed as harming farmers and common laborers. The growth of the power and influence of corporations would reach its peak during the Gilded Age.

Jackson and the Second Bank of the United States

In 1819, the Supreme Court ruled in McCulloch v. Maryland that the Second Bank of the United States was constitutional by a 7-0 vote and that it could not be taxed by states. The political leaders of the state of Maryland had opposed the bank  and had passed a tax on all branches of banks that weren’t chartered by the legislature. The Second Bank was intended to help the growth of commerce, and Maryland sought to restrict it. Although Thomas Jefferson was the first major figure to espouse state’s rights, the official founding of the Democratic Party was under Andrew Jackson, a major proponent of state’s rights.

President Jackson and his supporters were deeply suspicious of concentrated economic power and took a dim view of the financial power of the Northeast. They opposed paper money as they believed it contributed to “a corrupting and demoralizing system that made the rich richer, and the poor poorer” (Remini, 127). Thus, only gold and silver coins were acceptable currency for them. They saw as the epitome of concentrated economic power in the Second Bank of the United States, a private institution created by Congressional charter to manage fiscal transactions for the U.S. government, with the federal government owning 20% of its capital. Jackson doubted the bank’s constitutionality and to make matters worse allegations abounded that the bank under its chief, Nicholas Biddle, had taken actions that favored John Quincy Adams in the 1828 election. Biddle was encouraged by Jackson’s supporters to select candidates from both parties as Bank of the United States officers, but he feared that using partisan balance as a criterion would inevitably detract from the quality of people who were officers of the bank.

Some of the opposition was based on fear of what federal authority on this issue could do to the institution of slavery. As future President John Tyler of Virginia, who would side with the Confederacy during the War of the Rebellion, warned, “if Congress can incorporate a bank, it might emancipate a slave” (Dangerfield, 98). As president, he would veto a proposed reconstitution of the Second Bank of the United States. Andrew Jackson was openly hostile, stating to a delegation of bankers discussing the reauthorization of the charter of the Second Bank of the United States, “You are a den of vipers and thieves. I intend to rout you out, and by the eternal God, I will rout you out” (U.S. History).  In 1832, Bank President Nicholas Biddle and his allies in the Senate, Henry Clay of Kentucky and Daniel Webster of Massachusetts, attempted to reauthorize the bank four years early to provide an election dilemma for President Jackson and to ensure the bank’s extension.

If Jackson signed reauthorization of the bank, it would please Pennsylvania voters but it would displease his farmer and laborer constituency and if he were to veto reauthorization it would cost him in New England and in Pennsylvania. Congress voted to reauthorize and a majority of his cabinet supported it, but as Jackson said to Martin Van Buren in response to these efforts, “The Bank is trying to kill me, Sir, but I shall kill it!” (U.S. History) Jackson vetoed the Bank Recharter Bill, and ordered deposits removed from the Bank and placed in state banks. Before the veto of the Second Bank of the United States, presidents saw it as their place to only veto legislation they believed unconstitutional, but Jackson used arguments in his veto message that were ideological and political as well as constitutional. He stated in his veto message, “The rich and powerful too often bend the acts of government to their selfish purposes…When the laws…make the rich richer and the potent more powerful, the humble members of society – the farmers, mechanics, and laborers – have a right to complain of the injustice to their government” (Boissoneault). This set the precedent of presidents vetoing legislation they disagreed with and we haven’t looked back since. Jackson’s opposition, which controlled Congress at the time, was furious and passed a resolution censuring the president for “abuse of power”. In 1833, Biddle tried to reassert his power by constricting loans from the bank, which caused a mild economic downturn. Ultimately this power play didn’t help his case for extending the bank’s charter and in 1836 the Second Bank of the United States was ended. The economic repercussions of this wouldn’t be clear until after Jackson’s presidency, and his successor Martin Van Buren would take the political heat for it.

Jackson’s action against the commercial interests of the Northeast came to be greatly celebrated among Democrats for a long time and, along with his advocacy for working class people and farmers, resulted in them venerating Jackson with Jefferson as the greatest presidents. Indeed, it wasn’t until about the last twenty years that Andrew Jackson lost his spot on top ten lists for historians. His veto of the Second Bank also made him a pioneer of class politics and inspired future populist and progressive campaigns and planks, including that of Franklin D. Roosevelt. The progressive movement of the late 19th and early 20th centuries in the first place was a response to the politics, economics, and social conditions of the Gilded Age. The Democratic Party at its start in the 1830s was, paradoxically to the eyes of the modern viewer, both for state’s rights and economically progressive.

Jackson, however, had his limits on state’s rights. He would not, for instance, permit South Carolina’s nullification of the Tariff of 1832 and used the navy to enforce it. He called anyone who would propose to secede from the United States a traitor and threatened the hanging of political leaders who tried it. Ultimately, Jackson signed into law a bill with lower tariffs. Tariffs, as I have written before, were until the 1970s understood as a position of the political right, as Americans for Democratic Action repeatedly counted votes for lower tariffs favorably in their legislative scorecards.

Historian Michael Kazin (2017) writes, “The [Democratic] party’s founders in the 1830s believed that the federal government needed to stay out of most economic matters; but unlike conservative Republicans today, they did so because they thought that an interventionist government benefited the rich and well-connected”. Other progressives viewed state’s rights similarly…in 1927 Vernon L. Parrington, a left-wing literary historian, wrote with lament that the decline of state’s rights with the justified end of slavery opened the door to “the principle of capitalistic exploitation” (Genovese). In 1946, liberal historian Arthur Schlesinger Jr., a founder of the left-wing Americans for Democratic Action lobbying group, wrote the Pulitzer prize winning The Age of Jackson, which celebrated Jackson as a hero for the working class and emphasized his and his coalition’s checking of the power of business. This was the basis FDR could justify his legacy as like that of Jackson despite his different approach. As historian Eugene Genovese (2001) writes, “…although we tend to think of federal intervention as “progressive” and the relegation of regulatory power to the states as “reactionary”, the historical record shows nothing of the sort. After the Civil War the federal government, notably the courts, smoothed the way for big-business combinations (“pools”, “Trusts”), and it was the states that initiated restrictions”.

The New Deal transformed Democratic politics in terms of means, but not ends. Likewise, the Republican Party’s true ideological ancestors were the Whigs and the Federalists, for they stood for making the United States an easier place to do business in. Their means changed…the federal government, rather than state governments, were used to check capitalism. Additionally, the context of the Democratic Party has changed. As I have written in the past, who they view as a common person has greatly expanded. Many modern pop perspectives on history place an immense emphasis on racial issues, which means the primary focus on Jackson regards the Trail of Tears and his status a slave owner who uncritically embraced the institution. These are undoubtedly factors of his presidency that should be talked about and ones that Arthur Schlesinger Jr., to his regret, completely ignored in writing The Age of Jackson. However, such a heavy emphasis can serve to remove from public consciousness significant historical issues that, were we to place more emphasis on them, would improve public understanding of history.

The War Against the Bank. U.S. History.org.