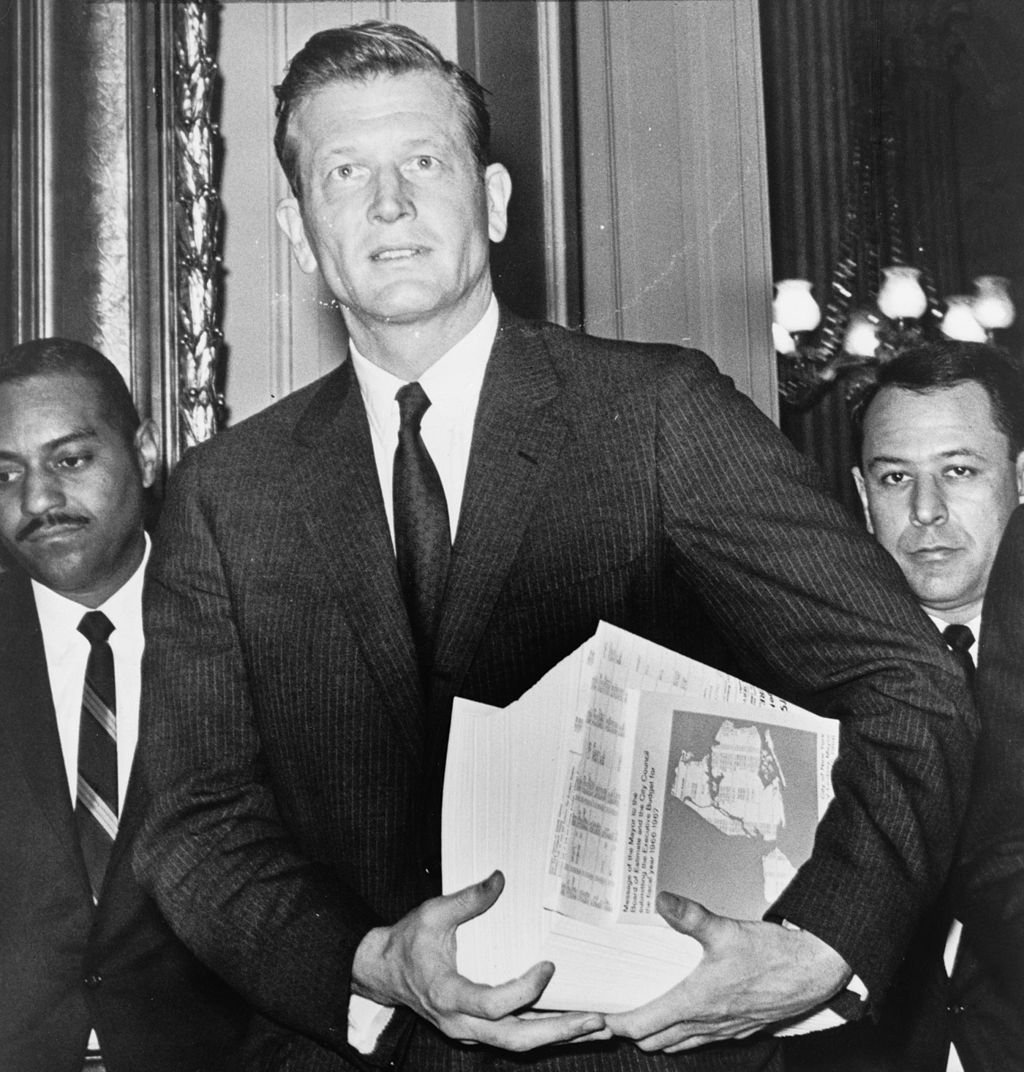 In 1958, the Republican establishment of the “silk stocking” district of Manhattan was looking to replace Congressman Rene F. Coudert, who was calling it quits after coming close to defeat for reelection in 1956. Enter John Lindsay (1921-2000). Lindsay had been an aide to Attorney General Herbert Brownell, who gave him his endorsement. He also won endorsements from other Republican figures, including advertising executive and former Congressman Bruce Barton, John Aspinwall Roosevelt, and Wendell Willkie’s widow, Edith. Lindsay kept the seat for the Republicans in a tough year for the party and performed better than Coudert had in the relatively good year of 1956, and in his first term he seemed to give everyone some reasons to like him. In his first year, Americans for Constitutional Action gave him a 79% while Americans for Democratic Action gave him a 67%. Lindsay was at the start of his Congressional career a fiscal conservative who made exceptions for public housing, a subject of interest for his district. He backed President Eisenhower’s vetoes on water pollution and public works projects and supported cutting government spending. However, Lindsay was also a social liberal who was anti-anti-Communist and when elder conservative Noah Mason (R-Ill.) delivered a speech blasting the Warren Court, the freshman Lindsay spoke in the court’s defense. Indeed, he proved a firm supporter of the Warren Court’s decisions on criminal defendants, civil rights, and legislative reapportionment. He also proved an opponent of the House Committee on Un-American Activities. After the election of John F. Kennedy, his record began to drift in a decidedly liberal direction. Save for public works and food stamp legislation, Lindsay backed the Great Society and its flagship program, the Economic Opportunity Act of 1964, which launched the “War on Poverty”. In his last year in Congress, 1965, Lindsay got a mere 7% from Americans for Constitutional Action and didn’t oppose Americans for Democratic Action on a single vote. His overall MC-Index score is a 27%. It was on his liberal record that he ran for Mayor of New York City.

Lindsay ran for mayor on a platform that declared that New York City was a city in decline and in need of reinvigoration. His campaign slogan was borrowed from political commentator Murray Kempton’s statement about him: “He’s Fresh and Everyone Else is Tired” (Fettmann, 2000). His opponents were Democrat Abraham Beame and Conservative Party nominee William F. Buckley Jr. The latter, a giant in conservative intellectual circles as founder of the publication National Review, ran as a protest candidate with no expectation to win. Between Lindsay, who was running on the Republican and Liberal tickets, and Beame, the real contest was between two liberals. Lindsay, although not the usual fare for New York City politics as a WASP who graduated from Yale, he won the election. His start was full of promise and he proclaimed his belief that New York City was “Fun City” and his desire to keep it that way. However, a strike from the Transport Workers Union of America began on his first day of office, which resulted in a stoppage of subway and bus service. Lindsay ultimately negotiated a settlement, but the payout from the settlement ($500 more in yearly pensions for all workers) combined with more residents on welfare and economic troubles forced Lindsay to push for higher taxes. He also focused on providing extensive financial aid to minority communities and reforming the police, which won him praise from the city’s black community, but his efforts to decentralize teacher’s unions pitted black and Puerto Rican parents in conflict with Jewish teachers and administrators. The ongoing tensions that resulted between the communities in the aftermath greatly troubled Lindsay. In 1968, a sanitation strike rocked the city, resulting in tons of garbage on the streets of New York City being blown around by gusts of wind. To make it worse, some garbage caught on fire.

Lindsay’s response to the aftermath of Martin Luther King Jr.’s assassination was widely praised, as he addressed angry crowds in Harlem on that very day. As journalist Pete Hamill wrote, “John Lindsay that night confronted the dragons of a possible urban apocalypse…There are men and women alive today who might have died except for Lindsay’s uncommon valor” (Murphy, 2010). Given his compassionate and attentive leadership for the city’s black population, he was able to spare New York City the magnitude of civil disturbances and riots that occurred in the aftermath. His ability to engage with voters was one of his greatest strengths as mayor. However, he was negatively associated with New York City’s free spending ways, and when justified and not he was getting blamed for the city’s increasingly strained finances – his administration borrowed money to fund regular expenditures. In 1967, Lindsay’s administration produced the city’s very first construction budget to exceed $1 billion, most of which was to be offset by federal funds. The rise in crime in the city also occurred under Lindsay’s watch, and one of his emphases had been reform of the police through citizens commissions to report police misbehavior. He was frequently blamed by New York City voters for the city’s descent into crime, which although the rise had started under his predecessor, Robert Wagner Jr., it accelerated in his time in office and he proved unable to mitigate the situation.

In 1967, Lindsay was one of the public officials appointed by President Lyndon B. Johnson to serve on the Kerner Commission, and quickly he and Senator Fred Harris (D-Okla.) came to be the driving forces of the committee and were largely responsible for the committee’s report that the causes of urban riots were a lack of economic opportunity and warned that American society was moving into two societies: white and black, separate and unequal, and called for an extensive program to remedy the situation. The report blamed white society for the creation and maintenance of the ghettos.

The Blizzard and Lindsay’s Political Switch

On February 8, 1969, a massive blizzard hit the east coast, with New York City being especially impacted. The response of Lindsay and New York City’s government was widely panned, and many areas remained snowed in for over a week. Lindsay was accused of giving favorable treatment to Manhattan over Queens. Diplomat and undersecretary general for the United Nations Ralph J. Bunche wrote to Lindsay, stating that he had never “experienced such neglect in snow removal as now” (Chan, 2009). When Lindsay visited Queens, the response to him was quite poor. He was booed on the streets, a woman screamed that “You should be ashamed of yourself”, and another woman told him to “Get away, you bum” (Chan, 2009). The reception to his visit wasn’t entirely negative, however. One woman told Lindsay that she thought he was “a wonderful man” to which he responded, “And you’re a wonderful woman, not like those fat Jewish broads up there”, referring to residents of a nearby apartment complex who had criticized him (Chan, 2009). This comment wasn’t reported at the time…had Lindsay made such a remark in the age of social media it would have been devastating, as he was already being accused of disfavoring Jews. As a result of the backlash to the Lindsay Administration’s incompetence on the blizzard, Lindsay lost renomination by the Republican Party, but won the Liberal and Independent nominations and managed to win reelection against Republican state Senator John J. Marchi of Staten Island and Democrat Mario Procaccino, the latter who coined the term “limousine liberal” to describe Lindsay and his supporters. However, he was politically weakened and he complained that the city was impossible to govern, an assertion that would be disproved by future mayors.

In 1971, Lindsay switched to the Democratic Party and that year saw yet another strike, this time of county and municipal employees who didn’t work for two days, resulting in drawbridges being stuck in the up position and massive amounts of sewage spilling into waterways. The following year he ran for the Democratic nomination for president, but he fared about as well as de Blasio in his run. In 1973, he declined to run for reelection. By 1975, New York City had to ask the federal government for a bailout, which was, after some hesitation from President Ford, granted. In 1980, Lindsay tried one more time to win office when he sought the Democratic nomination for the Senate, which he came in third. He subsequently served as a guest host on Good Morning America. Lindsay died on December 20, 2000 at the age of 79.

Lindsay’s time as New York City’s mayor is widely regarded as a failure because the city got worse under his watch on crime, fiscal irresponsibility remained the rule, welfare dependency increased, economic conditions worsened, and white flight increased. New York City was, under Lindsay, anything but “Fun City”. His first press secretary Woody Klein’s book on him was titled, Lindsay’s Promise: The Dream That Failed. The best that can be said for Lindsay honestly was that he managed to reduce the severity of unrest in New York City after the assassination of Martin Luther King Jr. His administration was a difficult one full of crises which he was largely not prepared to handle aside from throwing money at them.

One thought on “John Lindsay: From Eisenhower Republican to Liberal Democrat”