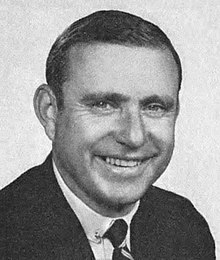 Although the 1960 election was a loss for Richard Nixon against John F. Kennedy, House Republicans made gains in Congress, a rebound from the disastrous 1958 midterm elections. One of the victors was John Rousselot of San Marino, California, director of a successful public relations firm. Rousselot quickly became regarded as one of the most conservative members of Congress and was one of two at the time who were members of the John Birch Society. From educational television to public works, he opposed just about everything John F. Kennedy was for. Although Rousselot had suffered polio in childhood and walked with a limp as a result, it didn’t stop him from playing on the Congressional baseball team. He was a rising star in the conservative movement, but his vigorous defense of the John Birch Society and redistricting cost him reelection in 1962. He subsequently served as the organization’s director of public relations and in 1964 he released a record titled “The Third Color”, in which he argued that the civil rights movement had been thoroughly infiltrated by communists…the line the John Birch Society was pushing at the time. In 1970, Congressman Glen Lipscomb died of cancer and Rousselot ran to fill the vacancy, easily prevailing in the conservative district. Through his friendly and good-natured personality, he was able to gain more influence in Congress and in 1974 he helped his friend, liberal Republican Pete McCloskey of San Mateo, California, win renomination. Rousselot pushed for balanced budgets, deregulation, and reducing the growth of the food stamp program while in Congress.

In 1979, Rousselot left the John Birch Society as he was mulling a Senate campaign, citing both Robert Welch’s leadership claim that Dwight Eisenhower was a communist and that he didn’t want to be viewed as being beholden to any organization. He ultimately opted not to challenge Democrat Alan Cranston the following year, but he managed to piss off a powerful political actor: Phil Burton. In 1980, Rousselot recruited a strong candidate who came close to defeating Phil’s brother, John, in his San Francisco district. In retaliation, Phil Burton, who played a major role in California redistricting, had Rousselot redistricted into a Democratic Latino district. Although he valiantly tried to hold on to the seat in the 1982 midterms, including having his wife deliver a speech in Spanish, he was defeated. President Reagan subsequently tapped Rousselot to be one of his advisors. He subsequently served as head of the National Council of Savings Institutions. In 1992, Rousselot attempted a comeback, but his connections with convicted fraudster Charles Keating harmed him as he was linked to the industry’s collapse in 1987 and he lost the GOP nomination.

Rousselot died in 2003, and he stands ultimately as the most successful politician who was in the John Birch Society. John Schmitz served less than two full terms in Congress, Edgar Hiestand served ten years in Congress, and Larry McDonald, who served eight years as a Democrat from Georgia, was on KAL 007, an airplane shot down by the Soviets the year he became chair of the society.