In the 1960s and 1970s, the presence of moderate to liberal Republicans was far greater in the Republican Party than today, and one of these people had an important warning about our future. 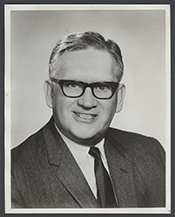 Republican Charles Mosher (1906-1984) was elected to Congress from Ohio’s 13th district (southwest of Cleveland) in 1960. The district had a long history of Republican affiliation: from 1919 to 1977 Democrats only held the seat for six years, but Mosher’s record in the House is reflective of the change the district underwent during his time. He was in his first three terms moderately conservative. Mosher was notably both a member of the NAACP and the ACLU, uncommon for a Republican. In the late 1960s he began moving in a more liberal direction, becoming staunchly liberal on social issues, strongly opposed to Nixon’s Vietnam War policies, and moderately liberal on economic issues. In his first four terms (1961-69), Mosher had averaged a 65% on the MC-Index, whereas in his last four terms (1969-77), he averaged a 27%. The times were so different for the parties that he wasn’t even the most liberal Republican Congressman from Ohio – that was Charles Whalen. Mosher supported President Ford on more issues than Nixon as he was on good personal terms with the former. Overall, his lifetime MC-Index score was a 46%. Mosher was also the first Republican to vote against Vietnam War appropriations in 1967 and considered his greatest regret voting for the Gulf of Tonkin Resolution. However, what I find most notable about this man is what he said at the end of his career that carries a great deal of relevance today.

In 1976, Mosher opted to retire, not wanting to stay in office after the age of 70. Having served as the ranking Republican on the Science and Technology Committee, he came to realize what lay ahead in the future. Mosher found that Congress had more information at its disposal but was less and less able to make decisions. As he stated in his last interview as a representative, “Perhaps we are confused by the facts, perhaps we are so much more aware of the complexities of the world that it makes us indecisive – much more than we were a few years back when we flew by the seat of the pants” (The Washington Post). Mosher also issued a warning about the increased amount of information, stating that people find it difficult to process this increased flow of information that people would rather choose to look for simple answers than confront the complexities the information tells us. Although he observed this forty-four years ago and he has been dead for thirty-six years, the phenomenon he speaks of is truer than ever today. We see more and more polarization fueled by people using the vast pool of information and connection who seek out other like-minded people and views. It thus becomes harder to craft consensus policies.

Mosher was succeeded easily by liberal Democrat Don Pease, who won 66% of the vote. The district had changed substantially in its politics. In 1982, the 76-year old Mosher was awarded a master’s degree in government from Oberlin College, becoming the oldest person to be awarded a degree from the university. His thesis, in keeping with his thinking about the longer run future, was that representatives should be elected to four-year terms and senators eight so they can think more about policy than reelection.