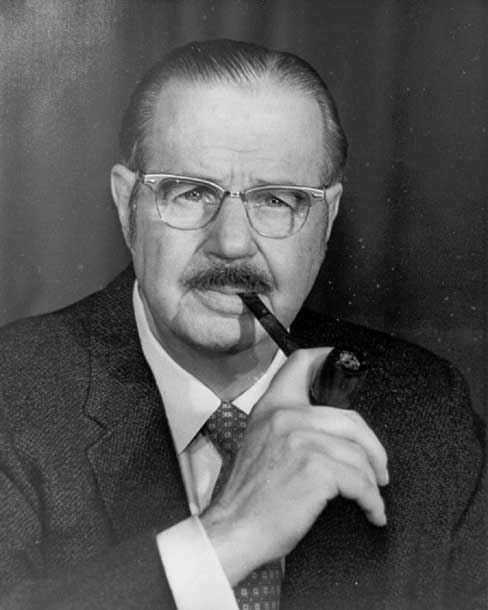 The year is 1940, and Republicans have been struggling to win Congressional seats in traditionally Republican Philadelphia. The only Republican elected from Philadelphia that year was Hugh Doggett Scott Jr. (1900-1994), who with one exception kept the seat in Republican hands. He started his career in the House as a staunch critic of FDR’s domestic and foreign policy, but he began to moderate during World War II. Although Scott lost reelection in 1944, this would be the only time he lost. In 1946, he was returned to the House in the Republican wave that brought the GOP back in control of Congress for the first time since the Great Depression. Scott followed the party line during the 80th Congress, voting for the GOP’s domestic measures while cooperating with the Truman Administration on foreign policy. He ran the GOP’s election efforts in 1948 as head of the Republican National Committee, but his efforts fell short and they lost both Congress and the presidential election. The 80th Congress would be the last one in which the GOP held all the Philadelphia seats in Congress, and Scott was one of two Philadelphia Republicans reelected that year.

Although he fell into disfavor given the GOP’s election results and was almost ousted as RNC chair, he remained in Congress and grew more and more moderate. Scott would gain such a reputation for this that in his obituary, The New York Times would write that he was “known as the Senate’s most liberal conservative, its most conservative liberal, and its most extreme moderate” (Crass, 496). In 1952, Scott joined the efforts to recruit Dwight Eisenhower to run for president, and it was in his administration was most ideologically at home. In 1958, Republican Senator Edward Martin opted not to run for reelection, so Scott ran to succeed him. Scott succeeded despite it being a terrible Republican year…he managed to capitalize on his moderate reputation as well as his sense of humor, and this likely put him over the top. He commented upon the US’s U-2 spy program of the USSR being exposed in 1960, “We have violated the 11th Commandment – Thou Shalt Not Get Caught” (Beschloss, 218). Scott was also a collector of pipes and an expert on Chinese culture and art, having written books on the latter subject. As a senator, he didn’t necessarily back all of Eisenhower’s positions, having voted to override his vetoes on public housing legislation and an area redevelopment bill.

Scott frequently cooperated with Democratic administrations and voted for much of the Great Society, but he supported two conservative amendments to the Constitution: the school prayer amendment and the legislative apportionment amendment. He was also a strong supporter of civil rights legislation. Scott’s reelection bid in 1964 was tough as the nation wasn’t ready for a conservative like Barry Goldwater to run for president and he narrowly prevailed, despite President Johnson badly wanting him defeated for his dogged efforts at investigating the Bobby Baker scandal. In 1969, party moderates and liberals succeeded in electing him Minority Whip to replace the outgoing Thomas Kuchel, a fellow moderate. He was often at odds with Minority Leader Everett Dirksen (R-Ill.), who didn’t want him in this post and did his best to sideline him. However, his time on the sides wouldn’t last – Dirksen died of lung cancer later that year and the Senate Republicans had to choose a new leader. One of the candidates was Dirksen’s son-in-law, Howard Baker Jr. of Tennessee, while the other was Scott. Baker’s bid was audacious as he had not been in the Senate for even half a term, and he capitalized on his connection with Dirksen. Ultimately, Scott, having seniority and being better known, was elected.

Scott did his best as the leader of the Senate Republicans to support President Nixon and he often voted to sustain his vetoes as well as back his efforts in Vietnam. He boasted to reporters in 1969 that “The conservatives get the rhetoric, and we get the action”, and this did seem to characterize Nixon’s actions that year on domestic policy (Byas). This didn’t, however, mean that Scott had become Nixon’s toady: he voted against the nomination of Clement Haynsworth to the Supreme Court in 1969 and opposed his efforts to amend the Voting Rights Act by applying it nationwide. He also never formed a comfortable working relationship with him. Nixon proved rather distant, and wouldn’t even let him address him on personal terms. Scott was sure to get assurances with his successor, Gerald Ford, that he could still call him “Jerry”. In December 1973, Scott, believing in Nixon’s innocence, urged him to release the tapes to clear the air on Watergate. The following year, he accompanied Senator Barry Goldwater and House Minority Leader John Rhodes to inform President Nixon that he had lost too much support to survive an impeachment vote upon the release of the Watergate tapes. In 1976, he opted not to run for reelection as he was under investigation for allegedly receiving an illegal campaign contribution from Gulf Oil Co.

Hugh Scott was in two ways a last. He was the last political survivor of the old Philadelphia Republican machine and the last moderate to lead the GOP in either legislative body, having a lifetime MC-Index score of 52%. In the Republican Senate of today, only Susan Collins of Maine and Lisa Murkowski of Alaska would be ideological kin for him, and they are the most liberal Republicans in the Senate. Scott was not even close to the most liberal one in his day. As I have remarked before, partisans who howl about party disloyalty today have no idea how good they actually have it.

Crass, S. (2015). Statesmen and mischief makers: officeholders who were footnotes in the developments of history from Kennedy to Reagan, Vol. I. Bloomington, IN: Xlibris.