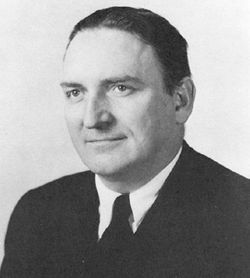 As I have previously written, the Great Depression had a way of raising the public profile of some real characters. This included power-hungry and corrupt politicians and ministers. The most notorious religious figure of the time was Father Charles Coughlin, an anti-Semitic demagogue whose radio program reached millions of Americans. However, his public career ended abruptly in 1942 due to pressures in the Catholic Church as well as from the Roosevelt Administration. This was not the case for another religious demagogue, Reverend Gerald L.K. Smith (1898-1976).

Smith started out his time in politics in Louisiana where he befriended Governor Huey Long and ran his national Share Our Wealth campaign, which called for setting a national minimum and maximum of income. As a radio preacher, he used his platform to denounce utility companies, the rich, and to promote trade unions. In 1935, Smith lost his leader when Long was assassinated, and he officiated his funeral. Although he had initially supported FDR’s election in 1932, in 1936 he backed the Union Party and its nominee, populist Republican Congressman William Lemke, as FDR had refused to back the Townsend Plan. Smith increasingly throughout the 1930s took the Share Our Wealth organization in the direction of white supremacy and joined William Dudley Pelley’s Silver Shirts, a fascist paramilitary organization patterned after Mussolini’s blackshirts. The world of Smith was a world of shadowy conspiracies and troublesome minorities. His views on blacks were at best extremely patronizing, as he expressed a desire to protect the “good blacks”, which he defined as being humble and deferential to whites.

Americans feared getting involved in another World War, and Smith was one of the most outspoken opponents of FDR’s foreign policy and spoke at length against communism. Given his strong public speaking abilities, his efforts and petitions attracted support from major politicians such as Senators Arthur Vandenberg and Gerald Nye. The former submitted his petition to the Senate floor to outlaw the Communist Party and to stay out of the war and praised his movement. In 1941, Smith testified before Congress for an hour against Lend-Lease, but his testimony didn’t change the debate. However, even at this juncture, there were people cautious about him: the America First Committee denied him membership.

In 1942, Smith founded the Christian Nationalist Crusade, an organization that spread The Protocols of the Elders of Zion, was anti-Communist, and opposed desegregation and miscegenation. He also published his own magazine, The Cross and the Flag, which pushed his positions. During World War II, he used this magazine to publish propaganda critical of the war effort. In 1942, Smith badly lost the Republican primary for the Senate in Michigan. That year, he founded the America First Party, which was openly anti-Semitic and had no backing from the leadership of the original America First Committee. Smith was sympathetic to Hitler and thought of him as a good Christian. He described himself thusly, “I’m an isolationist. I’m the organizer and leader of the America First party. Oh, I’m a rabble‐rouser. Put that down—a rabble‐rouser. God made me a rabble‐rouser . . . of and for the right” (New York Times). His closest friends in Congress were Sen. Robert Reynolds (D-N.C.) (who chose in 1944 to retire rather than face the electorate) and Rep. Clare Hoffman (R-Mich.), the latter whom was troubled by Smith’s anti-black racism and Smith falsely attributed his introducing an anti-discrimination bill in 1949 to “senility”, resulting in their break. In 1944, Smith ran for president on its ticket and made no real impact, winning less than 2,000 votes. He did even worse in the 1948 election on his successor party, the Christian Nationalist Party, which won a total of 48 votes. Smith doubled down on his antisemitism after World War II, calling for the release of all Nazi war criminals and in 1959 he wrote in The Cross and the Flag that the Holocaust didn’t happen and that the missing Jews had immigrated to the United States.  He also supported deporting all blacks, criminalizing what he referred to as “Jewish Gestapo organizations”, and ending the United Nations (The New York Times). During the Truman Era he campaigned against the nomination of Anna M. Rosenberg as Assistant Secretary of Defense because he feared she would wield an inordinate amount of power…and she was Jewish. In 1952, Smith attempted to prove that Dwight Eisenhower was a “Swedish Jew”, which of course he thought disqualified him for public office.

Although Smith did all he could to make himself relevant and would brag about his ties with politicians and other public figures, such as Henry Ford and Charles Lindbergh, the truth is that no one interested in maintaining a public career wanted to associate themselves with him anymore, and many of these people he hadn’t been that close to from the start. All the major politicians who had supported him as a non-interventionist were out of office or had cut ties.  Although Smith wrote passionately for Joseph McCarthy’s anti-communist investigations and tried to reach out to him, McCarthy avoided him and called him an anti-Semite. Although Smith spoke forcefully against civil rights legislation, Strom Thurmond and the Dixiecrats shunned him. Although Smith frequently denounced communism, wanted the US to leave the UN, and called for the impeachment of Chief Justice Earl Warren, John Birch Society founder and head Robert W. Welch explicitly barred him from joining. In 1956, he lobbied against the Alaska Mental Health Enabling Act, claiming it communist scheme to set up an arctic gulag when it just aimed to construct a mental institution in the Alaska territory. However, this measure received the support of Senator Barry Goldwater (R-Ariz.) and was passed easily.

The Twilight Years and Christ of the Ozarks

In 1964, Smith moved to Eureka Springs, Arkansas, and raised $1 million for what was planned to be a religious theme park. He managed to have constructed the Christ of the Ozarks statue in 1966 and started the tradition of holding Passion plays at this place. Smith died in 1976, the park unrealized and his hatreds unsatisfied. The only marker that really remains of Smith and his influence is the statue.