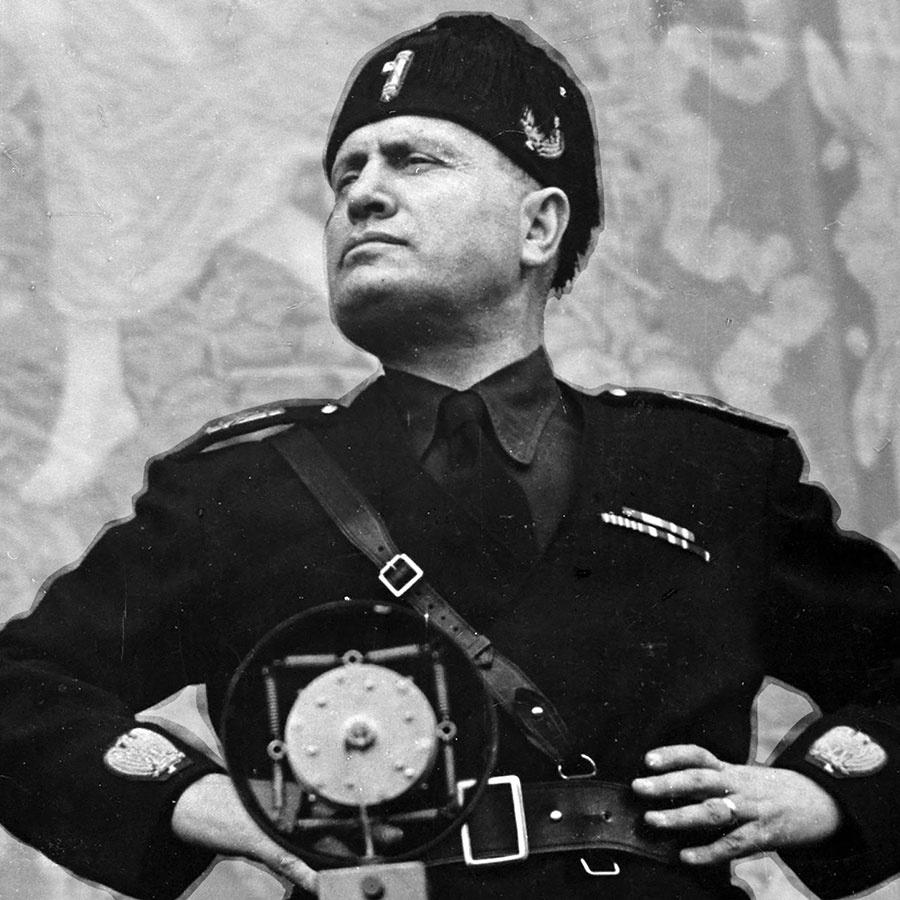 Since World War II, Italian dictator Benito Mussolini has been regarded as one of history’s villains. However, for quite a time many admired him and thought that he, as the saying goes, “made the trains run on time”. Mussolini managed to get fans on both the right and left of the spectrum before his alliance with Hitler. Indeed, he cultivated such views by regarding his policies as both “state capitalism” and “state socialism”. Mussolini himself was the son of a socialist blacksmith and was, up until his founding of fascism in 1919, a dyed-in-the-wool socialist. His departure from socialism was when he backed World War I, and their opposition to the conflict Mussolini found to be an abandonment of nationalism. His reputation in America was helped by the masculine image Mussolini put forth, his projection of confidence, and the perception he cultivated that he had saved Italy from communism. Here are some quotes from prominent Americans praising him, all are from wiki quotes:

“One hears murmurs against Mussolini on the ground that he is a desperado: the real objection to him is that he is a politician. Indeed, he is probably the most perfect specimen of the genus politician on view in the world today. His career has been impeccably classical. Beginning life as a ranting Socialist of the worst type, he abjured Socialism the moment he saw better opportunities for himself on the other side, and ever since then he has devoted himself gaudily to clapping Socialists in jail, filling them with castor oil, sending blacklegs to burn down their houses, and otherwise roughing them. Modern politics has produced no more adept practitioner.” – H.L. Mencken, 1931

“You protest, and with justice, each time Hitler jails an opponent; but you forget that Stalin and company have jailed and murdered a thousand times as many. It seems to me, and indeed the evidence is plain, that compared to the Moscow brigands and assassins, Hitler is hardly more than a common Ku Kluxer and Mussolini almost a philanthropist.” – H.L. Mencken to Upton Sinclair, 1936

“I don’t mind telling you in confidence that I am keeping in fairly close touch with that admirable Italian gentleman.” – Franklin D. Roosevelt

“There seems to be no question that [Mussolini] is really interested in what we are doing and I am much interested and deeply impressed by what he has accomplished and by his evidenced honest purpose of restoring Italy.” – Franklin D. Roosevelt, to Breckinridge Long.

“The greatest genius of the modern age.” – Thomas Edison

“I feel like turning to my American friends and asking them whether they don’t think we too need a man like Mussolini.” – Elbert Henry Gary, U.S. Steel

“Mussolini is a great executive, a true leader of men, and the great works he has accomplished are his genuine fortifications to a high place in history and in the hearts of his people.” – Millicent Hearst

Praise From Figures of Other Nations:

“What a man! I have lost my heart!… Fascism has rendered a service to the entire world… If I were Italian, I am sure I would have been with you entirely from the beginning of your victorious struggle against the bestial appetites and passion of Leninism.” – Winston Churchill, 1927.

“What a waste that we lost Mussolini. He is a first-rate man who would have led our party to power in Italy.” – Vladimir Lenin, 1922.

“A modern man may disapprove of some of his sweeping reforms, and approve others; but finds it difficult not to admire even where he does not approve.” – G.K. Chesterton

“Some of the things Mussolini has done, and some that he is threatening to do go further in the direction of Socialism than the English Labour Party could yet venture if they were in power.” – George Bernard Shaw

American newspapers either regarded Mussolini with praise, amusement, or neutrality. From the right, The New York Tribune and the Chicago Tribune credited him with saving Italy from communism and reinvigorating its economy. The New York Times often praised him, especially Herbert Matthews, who would favorably report on his invasion of Ethiopia and would do the same for the Cuban revolution later in life. In 1926, the Coolidge Administration gave Italy a lenient debt settlement, but this was for the purposes of expanding commerce with the nation and based on ability to pay. It was not regarded by most of its proponents as anything more than a business proposition. There were exceptions, however. Sen. David Reed (R-Penn.) defended him as did Rep. Sol Bloom (D-N.Y.), the latter who counted Mussolini as a personal friend. Bloom would later chair the House Foreign Relations Committee as a 100% advocate of FDR’s foreign policies. There were, however, Americans critical of Mussolini even in this time, and most of the debt settlement’s opponents considered the measure an endorsement of Italian fascism. American politicians who represented large Italian constituencies, even those privately against Mussolini, refrained from criticizing him as he and fascism were deeply popular among these populations. Official policy only grew more favorable to Mussolini: by 1930 Italy was only second to Britain in favor among European nations. In 1931, President Herbert Hoover reassured Italy’s foreign minister that the small group of anti-fascists in America “…do not exist for us Americans, and neither should they exist for you” (Tooze, 4). Among the politicians who were Mussolini’s critics in this time were not necessarily concentrated in their political views or affiliations: the leading ones were Senators Tom Heflin (D-Ala.) and William Borah (R-Idaho) and Representative Hamilton Fish III (R-N.Y.). Heflin was a Southern progressive and a racist and anti-Catholic demagogue, Borah was fiercely independent and moderately progressive, and Fish was a conservative non-interventionist who led the first House investigation of Communism in 1930.

American Opinion Begins to Shift: Mussolini’s Invasion of Ethiopia and Allegiance with Hitler

On October 3, 1935, Italian forces began invading Ethiopia without a declaration of war from Eritrea and Somalia, both Italian imperial possessions. Mussolini authorized the use of mustard gas on Ethiopian troops, in violation of the Geneva Conventions, of which Italy was a signatory. The League of Nations proved powerless to stop his invasion and when they voted to place sanctions on Italy, he took Italy out of the League. Although both sides committed war crimes in the conflict, Mussolini was the aggressor, and this began his alienation with western democracies. Britain and France had previously thought of Mussolini as a good buffer against Germany, but Mussolini saw eye to eye with Hitler considerably more than he did Britain or France. He eventually signed the Pact of Steel in 1939, bringing Italy in alliance with Germany, and then in 1940 the Tripartite Pact formed the Axis. Mussolini still had some fans, particularly among critics of the League of Nations, but his part in the Axis sealed his public reputation in the United States and the west.

Tooze, A. (2016, August 18). When We Loved Mussolini [Review of the book The United States and Fascist Italy: The rise of American finance in Europe]. The New York Review of Books.