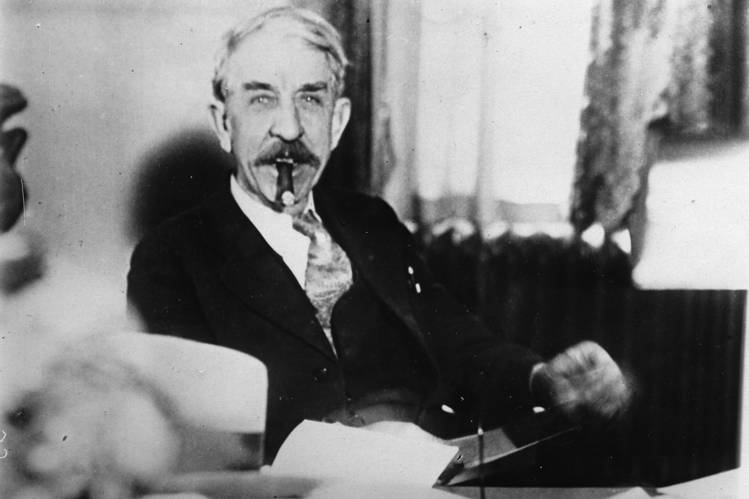 In 1907, Theodore Roosevelt admitted Oklahoma as a state, and one of the foremost proponents of its admission was William H. “Alfalfa Bill” Murray (1869-1956). He was nicknamed this as he tended to talk while on the campaign trail about his patch of alfalfa he farmed and advocated for it as a crop. After admission, the people of the state elected Charles Haskell governor and Murray became Speaker of the Assembly. Both were progressive Democrats and worked together to institute this agenda for the state. Haskell and Murray instituted regulations on corporations, banks, mines, and factories. They also enacted health and sanitary laws, child labor laws, and the construction of the state’s first prison. Important on their minds was the institution of Jim Crow: interracial marriages and interracial relations were made felonies and schools were segregated. As Murray himself put it, “We should adopt a provision prohibiting the mixed marriages of negroes with other races in this State, and provide for separate schools and give the Legislature power to separate them in waiting rooms and on passenger coaches, and all other institutions in the State” and went on to state that as a rule they “are failures as lawyers, doctors and in other professions. He must be taught in the line of his own sphere, as porters, bootblacks and barbers and many lines of agriculture, horticulture and mechanics” (Naylor, 196). He dismissed entirely any notion that they could be equals to whites, as did many white Oklahomans at the time. Although Murray declined to run for reelection in 1908, the Oklahoma State Legislature would eventually segregate everything in his absence, and in 1915 it became the first state to segregate telephone booths.

Murray’s political career would be mixed in success. In 1910, his bid to succeed Governor Haskell fell short, but he managed to get elected to Congress in 1912 and would serve two terms, accumulating a progressive record. However, in 1916 he lost renomination. In 1918, Murray tried again for governor but failed. In 1924, he led a group of Oklahomans, seeking a better life, in forming an American colony in Bolivia. Murray and his followers tried farming there for five years before returning to Oklahoma, finding the life there too difficult. By this time, however, political opportunity arose for Murray. By 1930 the country was in dire economic straits with the start of the Great Depression and Oklahoma was particularly hard-hit by the Dust Bowl and a severe drought, so he ran for governor and condemned what he called “The Three C’s – Corporations, Carpetbaggers, and Coons” (Hill). Voters liked Murray’s outspokenness as well as his rough-hewn style…when he dressed in any way resembling formality it was a rumpled suit that had ash from his ever-present cigar and food and tobacco juice stains. One author describes him as “disheveled, crude, vulgar, eccentric. No one accused him of bathing too often” (Levy, 163). These were not considered negatives for Oklahoma voters of the time, as this was thought of as authentic. He easily prevailed and went straight to work in trying to relieve the Great Depression by feeding the poor and cracking down on tax evasion. Like Huey Long in Louisiana and Eugene Talmadge in Georgia, Murray proved freewheeling and abusive with his power. He used the National Guard as his personal army and employed it a total of forty-seven times and frequently invoked martial law, despite threats from the Oklahoma Senate to impeach him. His attitude of his way or the highway would contribute to one of the most notable interstate conflicts.

In 1931, Governor Murray and Governor Ross Sterling of Texas fought out over a bridge that connected the two states. Texas was in the midst of a court case in which the Red River Bridge Company, which owned and operated a toll bridge next to the state-constructed free bridge crossing into Oklahoma, asked for an injunction to close the free bridge as there was an agreement that the state would buy the old bridge, and Texas hadn’t provided the full sum yet due to a budget shortfall. Governor Sterling closed the bridge, but Murray demanded it open and asserted that both sides of the bridge were in the state of Oklahoma per the Louisiana Purchase Treaty and proceeded to have the barriers to the new bridge torn down while the Oklahoma road leading to the toll bridge was torn down. He then sent the National Guard to open the toll bridge and let anyone through. Murray even showed up in person with an antique revolver. The controversy ultimately resolved in Murray’s favor.

Run for President and Feud with Roosevelt

In 1932, Governor Murray decided to run for the Democratic nomination for president, running on the campaign slogan “Bread, Butter, Bacon, and Beans” but he was no match for FDR. Although he initially endorsed Roosevelt and his New Deal, he began fighting with FDR over control of the Federal Emergency Relief Administration. He wanted to treat the agency as exclusively under his personal authority in Oklahoma, and FDR thus removed all control of it from him. Murray thus became a staunch critic of the New Deal.

In 1935, Murray, unable to run for reelection, left office. Although he made other attempts at office, including governor again as an Independent and for the Democratic nomination for the Senate in 1942, his political career was over.

Murray’s involvement in politics didn’t necessarily end, though: he wrote his extensive memoirs that included “…historical inaccuracies, religious digressions, fancied occurrences, prescriptions for home remedies, phrenological nonsense, and bizarre ideas about diet. But many of his stories and recollections are clear and concise and can be supported by other sources” (Bryant, 271).  He also included his ideas about race and Jews, which were venomous. Although he was viciously racist against blacks, he considered them to possess some virtues, but had no such consideration for Jews. Murray regarded them as Communists and believed in the Protocols of the Elders of Zion. In his memoirs, he expressed his belief that FDR was Jewish and that Bernard Baruch, who was Jewish, had created the New Deal. Some of Murray’s writings can be attributed to his declining mental faculties, which had begun after the death of his wife in 1938. Murray had previously stood as a staunch opponent of religious persecution and proposed a measure exempting religious minorities fleeing from persecution from a literacy test for immigration while serving in Congress. In addition to his memoirs, he wrote anti-Semitic and racist tracts and used Gerald L.K. Smith’s the Cross and the Flag as well as Gerald Winrod’s Defender Magazine as sources for his views. Both men were Nazi sympathizers with whom Murray maintained correspondence despite his sons pleading with him not to associate with them.

In 1948, he showed up at the Dixiecrat Convention, and bragged that he “introduced Jim Crow in Oklahoma” (Rothman). Although financially reliant upon others in his old age as he hadn’t saved for retirement, he lived to see one last victory. In 1951, Murray administered the oath of office to his son, Governor Johnston Murray, and got to live in the Governor’s mansion for four years. In his last years, Murray was in poor health, being mostly blind and deaf and needing assistance for just about everything. In 1956, he suffered a major stroke and in October he contracted double pneumonia, which put him in a coma. He died on October 15, 1956. “Alfalfa Bill” Murray was a foundational and unique figure in the state of Oklahoma and in that time reflected the views of many white citizens of the state, who were by political inclination Southern progressives.