In the wake of the protests to the morally and legally unjustifiable police killing of George Floyd, there have been a number of sentiments expressed that are troubling for being pro-rioting and looting. Before I start here, I must state that I think it is a false dilemma to say that you either must be pro-riot or pro-police brutality and racism and that I don’t object to the non-violent protesting that has occurred…it is legitimate. The vast majority of protestors have been peaceful, but there has been a riotous contingent, at least some of which is the work of Antifa, whose actions must not be endorsed and must be dealt with by law enforcement. Some, nonetheless, have taken it upon themselves to justify or condone rioting. I will present some of the things I have seen in the past few days and my problems with them. I start with ones regarding Martin Luther King, Jr., starting with these two images: 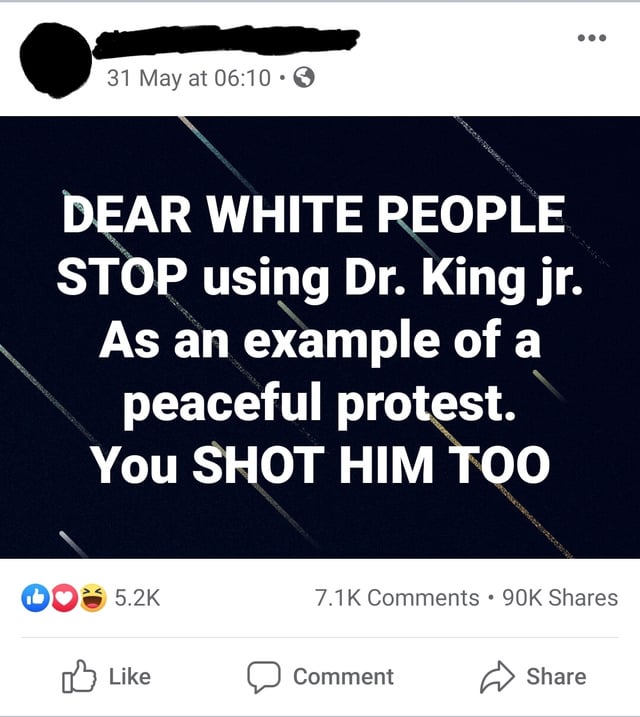 So James Earl Ray totally wasn’t an individual…he was a representative of intentions and will of white people past and present…that is if you believe the racial demagogues and the sufferers of white guilt. What makes James Earl Ray more representative of whites than other whites? What about MLK’s lieutenants, who believed and acted his principles and were not assassinated? What’s more, what about the Civil Rights Act of 1964 and the Voting Rights Act of 1965? Were these not achievements spurred on by MLK’s nonviolent protests and activism? Weren’t these examples of how nonviolent protest can result in the achievement of goals? This is a fundamental difference of perspective…a difference between seeing actions and guilt as individual or group based. The people who post this clearly see it as the latter, not the former. I am against the concept of collective guilt because that assumes people have a great deal of control over the actions of others.

Some have also argued for a selective reading of Martin Luther King Jr.’s words in a 1966 Mike Wallace interview to make it look like he thought rioting legitimate with the following quote, “I contend that the cry of “black power” is, at bottom, a reaction to the reluctance of white power to make the kind of changes necessary to make justice a reality for the Negro. I think that we’ve got to see that a riot is the language of the unheard” (CBS News). Here is the quote in a much fuller context, the quote itself is underlined by me:

REV. MARTIN LUTHER KING, JR. (speech): Now what I’m saying is this: I would like for all of us to believe in non-violence, but I’m here to say tonight that if every Negro in the United States turns against non-violence, I’m going to stand up as a lone voice and say, “This is the wrong way!”

KING (interview): I will never change in my basic idea that non-violence is the most potent weapon available to the Negro in his struggle for freedom and justice. I think for the Negro to turn to violence would be both impractical and immoral.

KING: There’s no doubt about that. I will agree that there is a group in the Negro community advocating violence now. I happen to feel that this group represents a numerical minority. Surveys have revealed this. The vast majority of Negroes still feel that the best way to deal with the dilemma that we face in this country is through non-violent resistance, and I don’t think this vocal group will be able to make a real dent in the Negro community in terms of swaying 22 million Negroes to this particular point of view. And I contend that the cry of “black power” is, at bottom, a reaction to the reluctance of white power to make the kind of changes necessary to make justice a reality for the Negro. I think that we’ve got to see that a riot is the language of the unheard. And, what is it that America has failed to hear? It has failed to hear that the economic plight of the Negro poor has worsened over the last few years.

WALLACE: How many summers like this do you imagine that we can expect?

KING: Well, I would say this: we don’t have long. The mood of the Negro community now is one of urgency, one of saying that we aren’t going to wait. That we’ve got to have our freedom. We’ve waited too long. So that I would say that every summer we’re going to have this kind of vigorous protest. My hope is that it will be non-violent. I would hope that we can avoid riots because riots are self-defeating and socially destructive. I would hope that we can avoid riots, but that we would be as militant and as determined next summer and through the winter as we have been this summer. And I think the answer about how long it will take will depend on the federal government, on the city halls of our various cities, and on White America to a large extent. This is where we are at this point, and I think White America will determine how long it will be and which way we go in the future. (CBS News)

To sum up, King did not endorse rioting, morally or as a tactic, but was communicating why a minority of blacks would be motivated to do so. There is a world of difference between understanding why someone does something and supporting. He did not change his mind on this issue either as he expressed the same sentiment in his speech at Grosse Pointe High School a mere three weeks before his assassination: “And I would still be the first to say that I am still committed to militant, powerful, massive, nonviolence as the most potent weapon in grappling with the problem from a direct action point of view. I’m absolutely convinced that a riot merely intensifies the fears of the white community while relieving the guilt. And I feel that we must always work with an effective, powerful weapon and method that brings about tangible results. But it is not enough for me to stand before you tonight and condemn riots. It would be morally irresponsible of me to do that without, at the same time, condemning the contingent, intolerable conditions that exist in our society. These conditions are the things that cause individuals to feel that they have no other alternative than to engage in violent rebellions to get attention. And I must say tonight that a riot is the language of the unheard. And what is it America has failed to hear? It has failed to hear that the plight of the negro poor has worsened over the last twelve to fifteen years” (Smith, 2020).

In a similar vein, Kellie Carter Jackson, a professor of Africana Studies, wrote an article titled “The Double Standard of the American Riot”, asserting that riots are only fine for Americans if white people commit them. I will link the article at the end of the post.

First, the Boston Tea Party was not a riot. If  people who think this want examples of violence in the lead up to the American Revolution, they would be better off citing the Stamp Act riots, attacks on tax collectors, and tarring and feathering. All are actions which patriot leaders firmly opposed and we in truth shouldn’t justify today. Second, the colonists who participated in the Boston Tea Party on December 16, 1773, didn’t indiscriminately loot and burn local businesses nor did they attack anyone. They had one target and one target alone: the tea of the East India Company, which had been granted a monopoly over the tea trade in the colonies as a way to rescue the business from bankruptcy. The dumping of the tea was an act of civil disobedience and destruction of property, but very targeted…the participating colonists even cleaned up after dumping the tea and replaced a broken padlock! Many of the people who would become known as the Founding Fathers opposed: George Washington of Virginia and Benjamin Franklin of Pennsylvania condemned the incident, believing it hurt the cause of the colonists. Franklin even proposed to John Hancock and Samuel Adams that they reimburse the company for the tea, writing “I am truly concern’d, as I believe all considerate Men are with you, that there should seem to any a Necessity for carrying Matters to such Extremity, as, in a Dispute about Publick Rights, to destroy private Property” (Latson).  John Adams of Massachusetts, however, usually averse to such actions, was more enthusiastic in a letter to his friend James Warren: “The Dye is cast: The People have passed the River and cutt away the Bridge: last Night Three Cargoes of Tea, were emptied into the Harbour. This is the grandest, Event, which has ever yet happened Since, the Controversy, with Britain, opened! The Sublimity of it, charms me!” (Norton) In his diary, he affirmed that he believed the dumping of the tea was justified. The Boston Tea Party is far closer to the sit-ins of the 1960s: both were the non-violent breaking of unjust laws. In the case of the sit-ins, it was Jim Crow laws, and in the colonies, it was taxation without representation, the Townshend Acts, and the Tea Act. The Boston harbor was closed as a punishment as no individual perpetrators could be identified. Are the laws against looting, burning, assault, battery, manslaughter, and murder (at least eleven have been killed in the riots so far) similarly unjust? Violent incidents as well as civil disobedience heated relations between the colonies and Britain, and the people who would become the Founding Fathers hoped to reach a resolution so that they would be accorded the same political rights as other Englishmen before resorting to revolution. When this failed and the British began imposing punitive acts on Massachusetts, the colonies formed the Continental Congress and began arming  for defense. When the British troops came to disarm the colonists, the first battle of the Revolutionary War, the Battle of Lexington and Concord, occurred on April 19, 1775. The colonists acted in their own defense against a military force. After the establishment of the United States as an independent nation, the first three presidents were certainly not supportive of rioting: President George Washington deployed the military to quash the Whiskey Rebellion. President John Adams signed the Sedition Act into law out of fear that the mob violence that characterized the French Revolution could make its way to the United States. President Thomas Jefferson signed into law the Insurrection Act of 1807, which permits the president to use the military to suppress violent civil disorders. The American founders at heart were not radicals…they simply wanted the British government to remain true to its principles. Likewise, those who want more police accountability in the wake of the murder of George Floyd and protest through non-violent means wish the police to be true to the law.

Norton, A. (2019, May 8). “The Sublimity of it, charms me!”: John Adams and the Boston Tea Party. Massachusetts Historical Society.