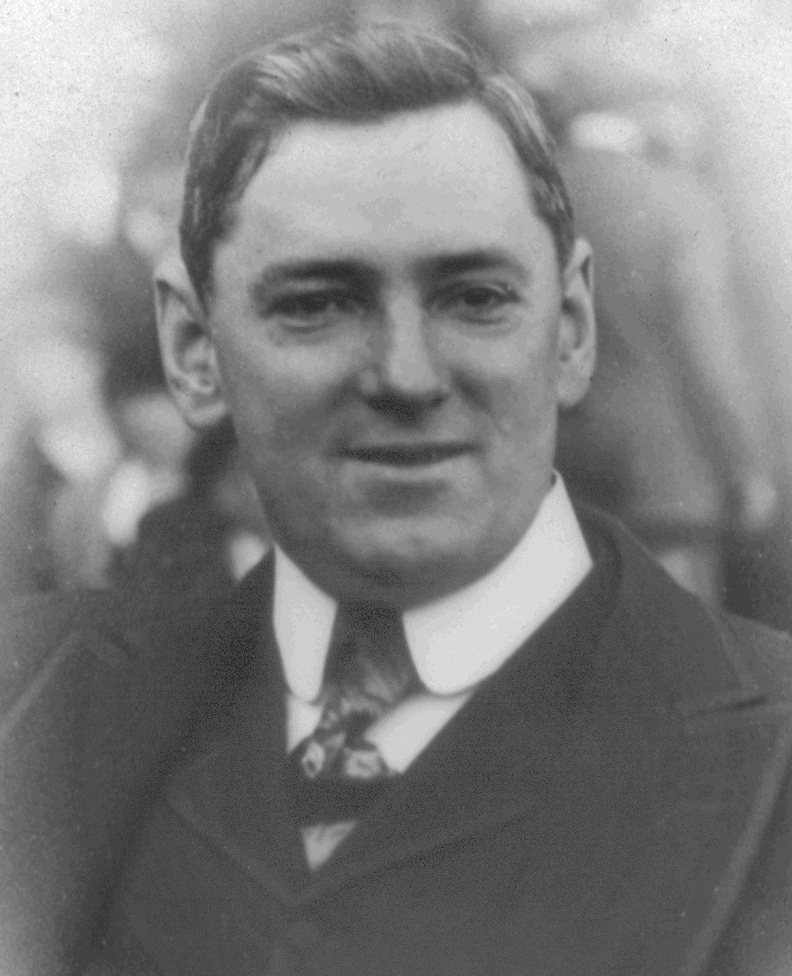 Today urban centers are known as Democratic strongholds, but it wasn’t always this way. Some were at one time competitive, such as Boston, that is, until the rise of James Michael Curley (1874-1958). He got his start in politics in the city’s ward politics in 1899 and in 1901 he was elected to the state legislature. Curley simultaneously served as chair of Ward 17 in Boston, establishing the Tammany Club to further his political interests and aid poor constituents. He managed to secure 700 patronage positions but, in the process, he was convicted of fraud for taking a civil service exam for a constituent to get him a job as a postman and sentenced to sixty days in jail, the time he spent reading books. Curley was elected to Boston’s board of aldermen in 1903 while in jail with the campaign slogan, “he did it for a friend”. In 1910, Curley wanted to run for Mayor, but JFK’s grandfather, John “Honey Fitz” Fitzgerald, wanted to return to the post, so he struck a deal with Curley: if he agreed to run for Congress instead, Fitzgerald would only serve a single term. However, Fitzgerald went back on the promise and Curley in turn blackmailed him, threatening to expose an affair with a significantly younger cigarette girl. Exit Fitzgerald, enter Curley.

In January 1914 Curley took office as Mayor of Boston, beginning his long reign of influence in the city. His Yankee demonizing, tax raising (especially property), free spending, and grafting ways resulted in many Yankees moving out of Boston, thus further securing his control over the city. He nearly bankrupted the city with his excessive building of parks and hospitals for his poor ethnic constituencies and the patronage jobs he doled out could be merely welfare by another name for how much work was actually performed. Despite his rough and tumble politics, Curley had a bit of a taste for the finer things and often quoted Shakespeare in his speeches. In 1917, he was defeated for reelection as a result of the machinations of Boston West End boss Martin Lomasney, who recruited another Irish candidate to take votes from Curley, resulting in the election of fellow Democrat Andrew J. Peters. In response to his term as mayor, the state legislature in 1918 passed legislation prohibiting Boston mayors from holding consecutive terms. In 1921, he was again elected Mayor of Boston after a bruising and close campaign filled with campaign tricks, including having “…young supporters knock on doors at midnight in Irish South Boston, pretending to be members of a Baptist Church club canvassing for the other guy. He planted hecklers who knew how to take a punch, which he’d deliver like Tom Mix” (Hiestand & Zellman, 111). Curley even bribed a KKK organizer known as the Black Pope $2000 to campaign against him. On his return as mayor he would continue expensive, graft-filled projects by raising taxes, borrowing money, and threatening action against any banks that were reluctant to lend.

In 1924, Curley ran for governor and with a strange regularity crosses would be burning in the hills when he would make a speech as he traveled across Massachusetts, supposedly signaling vigorous Klan opposition to an aspiring Irish Catholic politician. He would respond with defiance in his speeches, in one instance proclaiming, “If any Klansmen wish to meet us on the dark and lonely road, they are welcome to make the attempt” (Hiestand & Zellman, 111).  Of course, it turned out that the “Klansmen” were Curley’s men as he admitted in his autobiography. In 1925, Curley had a problem for his power, as the 1918 law was still in effect and he didn’t want another Democrat possibly competing with him for power as mayor. Thus, he stuffed ballots with Irish names for the Republican candidate, WASP Malcolm Nichols, who to this day is the last Republican Mayor of Boston. Elected again in 1929, Curley continued his ways, building public works at inflated contracts so he could line his pockets. He erred in his appointment of his corrupt and wealthy neighbor Edmond Dolan as city treasurer, who simultaneously on the downlow headed the Mohawk Packing Company and the Legal Securities Corporation. The former was contracted with to provide meat for Boston’s city facilities at prices 1/3 higher than market rate and the latter was a firm that bought and sold municipal bonds, which Dolan used to buy bonds from and sell bonds to Boston and collect fees on each transaction. On one occasion, he “reaped a huge reward when a private contractor on city work accidentally flooded the basement of a General Equipment building. General Equipment’s insurance offered to settle with the city for a $20,000 payment, but the amount listed on the settlement was for $85,000. The Finance Commission found that the insurance company had collected $20,000” (Leinwand, 225).

The growing scandal of graft combined with the deaths of his wife and son led Curley to take a tour of Europe with his daughter Mary, her friend, and Dolan so investigators wouldn’t be talking to him. Curley and his group met up with numerous high-ranking officials, most notably Pope Pius XI (who gave the group gifts) and Benito Mussolini. The latter and Curley got on quite well as both were pompous egomaniacs, and Curley praised Mussolini after the meeting, stating that he had never met a leader “who was more profoundly interested in the welfare of his people; the progress and prosperity of his country” (Leinwald, 225). This trip didn’t keep Dolan out of prison, however, as he was caught trying to bribe the jury and was sentenced to 2 ½ years.

In 1932, Curley announced that he was for Franklin D. Roosevelt, an abandonment of his previous support for fellow Catholic Al Smith. The Democratic leadership in Massachusetts was fully for Smith, and Governor Joseph B. Ely denied him a spot at the Democratic National Convention. Curley, however, had a solution: he arranged instead to serve as the chair of the delegation to Puerto Rico under the alias “Alcalde Jaime Miguel Curleo” and announced the territory’s six votes for FDR in a pseudo Spanish accent. In the early years of the New Deal, Boston received a huge share of federal funds for public projects, and naturally a large portion of the money would be pocketed by Curley. He had hoped that he would get an appointment as Secretary of the Navy or Ambassador to Italy or France based on promises from the Roosevelts, but when Roosevelt ultimately declined and offered him Poland, Curley reportedly responded, “If it is such a goddam interesting place, why don’t you resign the Presidency and take it yourself?” (Russell, 1959)

In 1934, Curley ran for Governor of Massachusetts to stay out of the penitentiary for his acts as mayor, and he won. On his way in, he got into a shoving match with nemesis and outgoing Governor Joseph B. Ely. Now he had the power to whitewash any investigations into graft by firing or bribing old members of the Boston Finance Commission and stacking it with his cronies, and instead turn investigations to his opponents. In 1935, his first year as governor, he was invited as a matter of course to Harvard’s commencement, and when he showed up, he appeared in “silk stockings, knee britches, a powdered wig, and a three-cornered hat with flowing plume” (Epps). When he was met with objections by the university marshals, he pulled out the Statutes of the Massachusetts Bay Colony, which defined proper dress for this occasion and proclaimed himself the only properly dressed person.

Curley’s tenure proved a nearly unmitigated disaster for his profligate spending on public works projects and corruption. Although he claimed to voters that he brought home federal money for projects, many of his requests failed as FDR and his New Dealers had a low opinion of him. Curley also, like Huey Long in Louisiana, wielded power like a dictator, which led to people accusing him of being an “Irish Mussolini”. He tried to undermine an independent judiciary in the state in his attempt to pass a law that would require all state judges 70 and older to appear before a board of psychiatrists and elected officials headed by Curley himself to determine senility. Rather appropriately, as governor he sat in the chair that Benito Mussolini had gifted him. However, there were limits to what he could do: in 1936 he ran for the Senate but lost to Henry Cabot Lodge Jr., the only Democratic Senate seat to go Republican in that election.

Curley’s next few years were met with defeats, most notably his effort at being elected governor again in 1938, but in 1942 he decided to return to Congress after nearly thirty years of absence. He faced off against incumbent Democrat Thomas Eliot, a New Dealer and WASP, and red-baited him: “There is more Americanism in one half of Jim Curley’s ass than in that pink body of Tom Eliot” (Goldman).  Despite Curley’s historical hostility to Yankee voters, he managed to win many of their votes in this election. In 1944, he won reelection. In November 1945, Curley was once again elected Mayor of Boston despite being under indictment for mail fraud. In 1946, he was almost certainly bought off by Joseph P. Kennedy to vacate his House seat so his son, John, could run. The following year, he was convicted of said mail fraud and served five months in prison, in the meantime the city was run by acting mayor John B. Hynes, who had been a city clerk. Curley promptly publicly insulted him upon his return, stating “I have accomplished more in one day than has been done in the five months of my absence” (Colleran, 2014). Hynes decided to run against Curley in 1949 and defeated him. Although he attempted a comeback in 1953, voters were appreciating the graft-free government of Hynes and thus Curley’s career finally came to an end. Despite his terrible reputation among Massachusetts’ WASPs, when he died in 1958 he remained beloved by many of his target constituencies and thousands showed up for his funeral.

In 2005, Edward L. Glaeser and Andrei Shleifer of Harvard University wrote a paper, “The Curley Effect: The Economics of Shaping the Electorate”, on Curley’s political behavior, stating that he “used wasteful redistribution to his poor Irish constituents and incendiary rhetoric to encourage richer citizens to emigrate from Boston, thereby shaping the electorate in his favor. As a consequence, Boston stagnated, but Curley kept winning elections” (Glaeser & Shleifer, 2005). This approach turns the traditional ideas of democratic politics on its head, that instead of voters voting for people with the best policies that increase wealth, Democratic politicians influence the makeup of the electorate with policy that makes the city poorer and while employing class warfare rhetoric to blame the rich instead of government policies and results in the poor rallying to them. This has been practiced in other places as well, including Detroit with Coleman Young and it can be argued that it is being practiced in California as well. By a tremendous stroke of irony, the same group of Irish Catholic voters fled Boston starting in the 1970s in response to deeply unpopular school busing policies, “some to escape a growing black population, others to fulfill a dream of lawns. They migrated to the South Shore, as the Yankees before them, fleeing their Irish ancestors, had to the North, their politics changing with their address” (Hiestand & Zellman, 118).