This time, I am covering more of the South. Specifically, Arkansas, Florida, Georgia, Oklahoma, and Tennessee.

This state was one of the latecomers among the South to the Republicans and despite an increasing cultural conservatism they continued to elect Democrats like Senators Dale Bumpers and David Pryor, who were not terribly inclined to conservatism to say the least. The state’s preference for electing Democrats to federal office (save the presidency) persisted until 2010, and today it is one of the most conservative of the Southern states as it shed its longstanding affiliation with the Democrats.

Ah, Florida. Although one of the classic swing states, it wasn’t always this way. The Republicans didn’t manage to get a foothold on the Congressional level until the 1950s (the last time they had any presence was in the 1880s). The state grew increasingly conservative during World War II, but the Democrats have, unlike other Southern states, managed to maintain a significant presence given the abundance of urban areas. Trump barely won the state in 2016, but the 2018 election results should be somewhat encouraging for the GOP. Although they lost two House seats, they gained a Senate seat and continued to hold the governorship. The state’s under 50 MC-Index for this session can be attributed to the increasing liberalism of the state’s Democrats, while the state’s Republicans are a bit wider in ideological diversity. 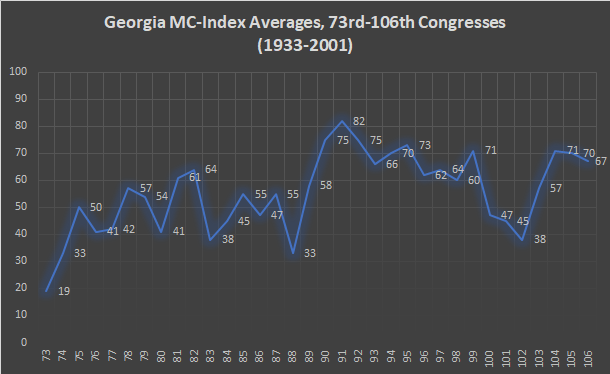 Among Southern states, Georgia has one of the most solid Democratic histories. They didn’t vote for a Republican candidate for president until 1964, but their politics grew more conservative during the 1930s and 1940s. However, battles between the progressive and conservative wings of the party persisted, with many of Georgia’s elected officials taking a more middling route. However, the 1960s did much for conservatism in the state and portended the state’s solid turn to the GOP in the 1990s. Although Democrats have some bullish feelings about this state, its going to be hard to make this state another Virginia given that the D.C. suburbs have a lot more investment in the maintenance of a large federal government than do, say, the Atlanta suburbs.

Oklahoma was a little slow to firmly embrace conservatism as the 1950s were good for the state’s Democratic Party, which didn’t tend to be as conservative as that of other states in the region. However, the 1960s started a trend to conservatism that somewhat receded into a middling plateau in the 1980s and early 1990s, but the Republican Revolution of 1994 permanently placed this state solidly in the GOP column on a Congressional level. Although there was a shocking win in the Oklahoma City district for a Democrat in 2018, this was due to a deluge of ad funds from Michael Bloomberg and may not be able to be repeated in 2020.

Among the Southern states, the GOP never truly was locked out of Tennessee’s politics, as Eastern Tennessee historically went against the grain of the state, siding with the Union during the Civil War and supporting abolition of slavery. Thus, the state’s 1st (Johnson City) and 2nd districts (Knoxville) have been in the GOP column in times good and bad. Like with Oklahoma, progressivism was stronger in Tennessee’s Democrats than those of other states and held up until the 1960s, when Republicans started to expand beyond East Tennessee. Like with Oklahoma, the Republican Revolution proved a boon to the state’s Republicans, but there were some moderate-to-liberal Democrats who managed to hold on until 2010, when their districts looked so bad for them they chose to retire. Both of Tennessee’s Senate seats have been held by Republicans since 1995 and it doesn’t look like it will go another way any time soon. This state, like Missouri, is reflective of the urban-rural divide, with Democrats only holding the House seats based in Nashville and Memphis.