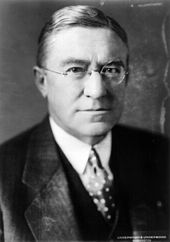 I covered this guy to a certain extent in my post about the proposal to impeach Herbert Hoover, and I stated that I would do something in depth. Here it is.

Louis T. McFadden, for all intents and purposes, was before 1929 no one who really made waves. He had been elected to Congress in 1914 from Pennsylvania and as chair of the House Banking Committee he authored a major banking law called the McFadden Act, but he wouldn’t become notorious until the onset of the Great Depression. In addition to trying to impeach President Herbert Hoover, McFadden got some ideas about what ailed the United States, specifically, international bankers and Jews, who were of course, often one and the same in his mind.

Some examples of McFadden’s outrageous anti-Semitism include:

When he delivered a speech against the Roosevelt Administration’s currency bill that ended the gold standard on May 29, 1933, he asked “Is it not true, that, in the United States today, the Gentiles have slips of paper while the Jews have gold and lawful money? And is not this repudiation bill a bill specifically designed and written by the Jewish international money changers themselves in order to perpetuate their own power?” (Arad, 174)

He cited the notorious anti-Semitic forgery The Protocols of the Elders of Zion, in the Congressional Record:

“Article XII (Protocols): We hold in our hands the greatest modern power-gold; in two days we could free it from our treasuries in any desired quantities.

“The Jews are economists esoteric and exoteric: They have one system to tangle up the Gentile which they hope to install when ‘Gentile’ stupidity has bankrupted the world…. We will surround our Government with a whole world of economists. It is for that reason that the science of economics is the chief subject of instruction taught by the Jews” (McGrady).

When it was pointed out to McFadden that this was a forgery, he stated that it didn’t matter whether it was genuine or not because it was predictive of what was happening.

He objected to Henry Morgenthau, a Jew, becoming Secretary of the Treasury based on his religion.

McFadden denied that German Jews were being persecuted under Hitler, rather the Nazis were going after Galician Jews in Germany who were Communists.

McFadden attracted some positive attention for his speeches from American fascists such as William Dudley Pelley, who ran the Silver Shirts, a paramilitary organization modeled after the Nazi stormtroopers. He was also praised as one of the only members of Congress to stand up to Jewish interests by Julius Streicher’s viciously anti-Semitic Nazi tabloid Der Stuermer. Despite all this, McFadden claimed that he was not “personally anti-Semitic” and that “Some of my best friends are Jews”, which rings hollow as some Nazis, including Streicher, either proclaimed their friendship for the Jews or claimed that they were not personally anti-Semitic (McGrady).

However, McFadden didn’t get it all wrong. He also stated in 1932:

Although McFadden is sometimes approvingly cited for his speeches against the Federal Reserve, Congressman James G. Strong (R-Kan.) found fault with his allegations of conspiracy and implied they were merely bluster:

“There is a disease that afflicts mankind which is very vicious. It warps the judgment, it narrows the vision, it even causes men to see red, to make mountains out of mole hills.  This disease has sometimes been referred to as B.A.  Ladies may refer to it as “tummy” ache, but out in the wide-open spaces men call it the “belly” ache, and I know of no man of my acquaintance that has this disease in so violent a form as the gentleman from Pennsylvania, Mr. McFadden.

I have not the time to refer to the many charges he makes against the Federal Reserve system, but I call attention to the fact that for 12 years he has been the chairman of the Banking and Currency Committee of this House and did not see fit during that time to remedy any of the evils of which he now complains. It seems to me entirely out of place to wait until he is retired as chairman of that great committee and then assault all of the institutions of which it has control” (Flaherty, 2000).

Despite his conspiratorial and anti-Semitic rhetoric, McFadden also happened to be an eloquent speaker and thus in July 1934 the Republican National Committee blundered by allowing him to rhetorically open their midterm campaign. He stated in the RNC sponsored speech, “Don’t spend your time worrying over the alleged tyrannies of Hitler. Look first to your own case” (Jewish Daily Bulletin).

On a positive note about McFadden, he did not appear to be bigoted against blacks…he opposed Jim Crow policies in the House restaurant and dissented when the committee set up to investigate these practices chose to retain policies that served to prevent anyone who was black and not either a member of Congress or a guest of a member of Congress from eating there while whites could eat there regardless of membership or being a guest.

In 1934, McFadden lost reelection in a strongly Republican district primarily due to his anti-Semitism and the following year he announced a presidential bid with the support of “the Independent Republican National Christian-Gentile Committee” on the platform to “keep the Jew out of control of the Republican Party!” (Jewish Telegraphic Agency). However, he didn’t attract enough support and thus tried to win back his old Congressional seat, but he lost the Republican primary to Colonel Albert G. Rutherford, who would win back the seat. On October 1, 1936, McFadden died of coronary thrombosis at the age of 60.

Arad, G.N. (2000). America, Its Jews, and the rise of Nazism. Bloomington, IN: Indiana University Press.