Today I am covering the Midwest and West with the states of Idaho, Montana, North Dakota, South Dakota, and Utah. All of these are currently solidly red states for presidential elections, but it wasn’t always this way. Before World War II, rural states could be quite amenable to left-wing populist proposals, especially if they benefited farmers. All of these states, for instance, had sympathy with the free silver platform. Idaho and North Dakota outright voted for Populist James B. Weaver in 1892, and only North Dakota would not vote for Democrat William Jennings Bryan in 1896. Thus, this area was fertile ground, at least initially, for New Deal politics. 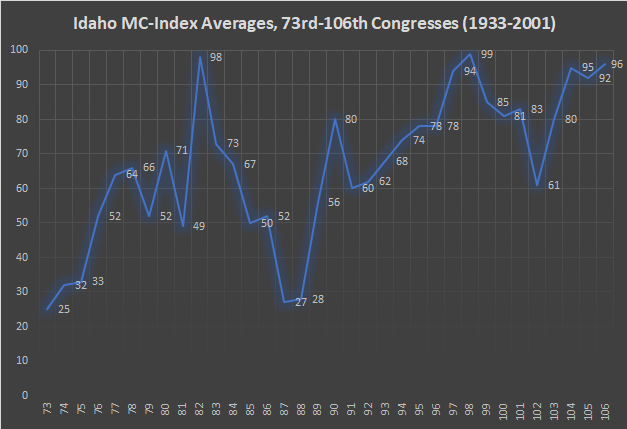 In 1933, Idaho’s political makeup was unrecognizable to the modern eye: two Democratic representatives and only one Republican senator in William E. Borah, who was somewhat part of the progressive wing of the party. This was actually quite a change for Idaho since for the last thirty years they had only been electing Republicans to the House and Democrats were not often elected to the Senate. However, like other rural states, the voters of the state of Idaho became increasingly antagonistic to the New Deal and FDR’s interventionist foreign policy was uniformly opposed. Indeed, Idaho’s entire delegation to Congress, Democrat and Republican, voted against Lend Lease in 1941. The state, however, would continue voting for Democratic candidates for president until 1952. Since then, only Democrat Lyndon B. Johnson won the state’s vote in 1964, and he barely prevailed there.

The backlash to the Great Society and the administration’s handling of Vietnam was so great that the state permanently shifted to conservatism. A state that once elected Soviet dupe Glen H. Taylor to the Senate now was electing extremely conservative anti-federal government types like Steve Symms and George Hansen. The only major Democratic success nationally for a while was the continued reelection of Senator Frank Church, who ultimately got swept away in the Reagan landslide in 1980. The most recent brief success the Democrats had was the election of Walt Minnick to Idaho’s 1st for a single term in 2008, but the incumbent Republican was pretty unpopular and the economy stunk. As a state, Idaho remains one of the least friendly states to Democrats in the nation, and they only have a chance at a Congressional seat when several unusually favorable factors are at play for them.

Of all these states, Montana is the most currently favorable to Democrats. The people like their current governor, Steve Bullock, and they reelected Senator Jon Tester in 2018. However, since 1997 Republicans have held their At-Large House district and their current senator, Steve Daines, is also popular and with Bullock ruling out a Senate run, he will almost certainly win reelection in 2020. Things weren’t always this way, in fact the Democrats have had a remarkably good run in the state historically. From 1933 to 1989, only one Republican represented Montana in the Senate, and he lost reelection after a single term. However, similar to other rural states, Montana was quite opposed to American involvement in World War II before Pearl Harbor and one of its senators, Democrat Burton K. Wheeler, was one of the chamber’s two foremost non-interventionists, and thus a tremendous pain in the ass for FDR. The state also elected the only representative to vote against war with Japan, Republican Jeanette Rankin. Senator James Murray alone backed FDR on foreign policy, and it almost cost him reelection in 1942. Yet, the state didn’t experience the same backlash against the New Deal as had other states.

After World War II, the Democrats would usually hold the 1st district (west, Helena) while the Republicans would usually hold the 2nd district (east, Billings). Although on a presidential level from 1952 onwards, the state would only twice vote for a Democrat, it wasn’t until the 1990s that Republicans finally managed to get an edge here in representation. The state is although red on a presidential level, its voters retain a soft spot for state Democrats provided they tread lightly on the subject of gun control.

North Dakota has a rather bizarre history on the Congressional level that speaks to the populism of its voters, which was vibrant even in this century. During Roosevelt Administration, the state’s voters only elected one Democrat to the Senate and he died after only two months in office. The state’s politics from 1933 to 1959 can be understood as a battle between the two factions of the state’s Republican Party: the NPL (Non-Partisan League) and the IVA (Independent Voters’ Association). The NPL was progressive and the IVA was conservative. NPL tended to have more success in elections, but both had in common staunch opposition to FDR’s foreign policy. By 1958, however, the issue had become muted with the internationalist Republican Eisenhower presidency, and the NPL decided to break off from the Republicans and have a merger with the Democrats. This was reflected in a father-son shift: Usher Burdick, a lifelong progressive Republican, retired from the House in 1959 and was succeeded by Quentin L. Burdick, a progressive Democrat. After Senator William Langer, a longtime progressive Republican, died in 1959, he was ultimately succeeded by Burdick.

Republicans still maintained a strong presence in representation until 1986, when Republican Senator Mark Andrews lost reelection to Democrat Kent Conrad, resulting in the state having, for the first time ever, a unified Democratic delegation to Congress. The Republican dry spell here persisted until the 2010 midterms despite easily winning presidential elections in the state. The 2018 election finally produced a unified Republican delegation to Congress, which hadn’t been seen in 60 years. North Dakota’s representation now reflects its presidential voting habits, but to only look at the present would be to miss that North Dakota’s voters have historically been quite independent in their behavior.

South Dakota was in a similar spot as Idaho at the start of FDR’s presidency, except its Republican senator, Peter Norbeck, was even more progressive than Borah. Unlike Idaho or Montana, however,  the start of FDR’s second term produced a pronounced reaction as after 1938 only one of its federally elected officials was Democratic Senator William J. Bulow, and he had been growing more conservative. In 1942, the state elected Republican ultra-conservative Harlan J. Bushfield to the Senate, solidifying unified Republican representation in the state…until the 1956 election. That year, a young Democrat won election to the House in George McGovern. McGovern was ultra-liberal and yet he appealed to South Dakotans on a personal level to the point that he was elected to the Senate in 1962.

In the 1970 midterms, Democrats really gained ground as two Democrats were elected to the House while the Senate’s one Republican, Karl Mundt, was insisting on remaining in office despite having suffered a debilitating stroke. His refusal to leave office ultimately created conditions that allowed yet another liberal Democrat to win election to the Senate in James Abourezk. Democrats and Republicans would ultimately spar for power in representation from the 1970s right up until the 2010 midterms. Like North Dakotans, South Dakotans exhibited a certain independence in their voting behavior: while they voted for Bob Dole in 1996, they tossed out incumbent Republican Senator Larry Pressler for Democrat Tim Johnson and in 1998 they easily reelected Senate Minority Leader Tom Daschle. At the end of the 20th century, the state had two Democratic senators and one Republican representative. 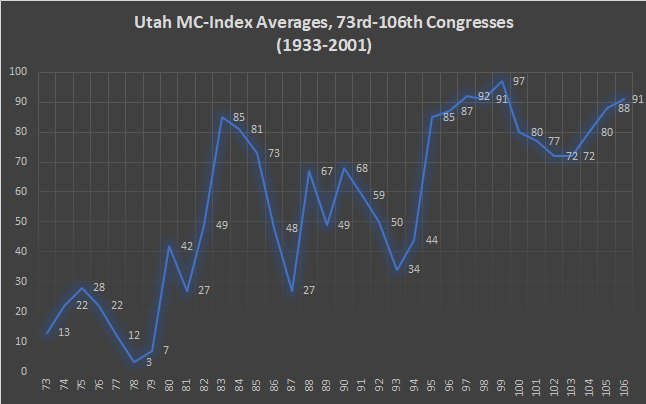 Utah really liked President Franklin D. Roosevelt, for he was the only Democrat for whose administration the voters of the state exclusively elected Democrats to federal office. In 1946, this changed with the election of the 80th Congress when for the first time since 1930 the state elected a Republican representative as well as a Republican senator for the first time since 1926. The state had its ups and downs in its state delegation, but on the presidential level it has voted Republican for all but one election since 1952. Democrats, however, did not stop being competitive on a statewide scale until 1976, when liberal Democrat Senator Frank Moss lost reelection to conservative Republican Orrin Hatch. The state has been one of the strongest in conservatism of its delegation since with Democrats today only really having a chance of winning the Salt Lake City based 4th district, which they did in 2018.