Today I am focusing on mostly border states so I am covering the states of Delaware, Kentucky, Maryland, Missouri, and North Carolina.

Delaware, the home state of Joe Biden, has had a surprising amount of history on the right. From 1933 to 2001, exactly three of the state’s senators could be regarded as liberals: James Hughes, James Tunnell, and Joe Biden. Hughes and Tunnell were New Dealers while Biden, is, you know, Biden. Both its senators in 1935 voted against Social Security and the state’s voters harbored a strong preference for politicians they regarded as fiscally responsible. The sudden drop off in the 77th Congress is due to both Hughes and Tunnell representing the state in the Senate and the House having a Democrat. Even as late as the 1990s the state is in moderate territory as one of its senators, William Roth, is a Republican as is its sole representative, Mike Castle. However, since 2001 the state has been getting increasingly liberal given that Republicans don’t even pay attention to the state in presidential elections and that Democrats now are practically a shoo-in. Perhaps if a Republican centrist like Mike Castle were to run the Republicans might get somewhere, but the state has become an awfully hard nut to crack, like it was between 1865 and 1889 when Democrats had undisputed control over the state. 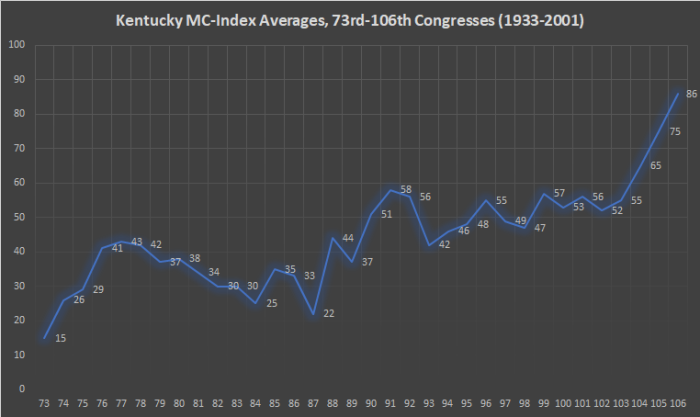 At one time Kentucky was one of the most strongly unionized states in the nation, but those days are gone as are the days of Democratic domination of the state. Although the voters of Kentucky voted for Democrat Andy Beshear as governor last year, this was due to the strong unpopularity of its embattled governor, Matt Bevin, as all the other statewide races went Republican. In the 1930s and 1940s, Democrats Alben Barkley and A.B. “Happy” Chandler were the primary politicians of the state, with the former being more politically successful and left-wing than the latter. He also served as Senate Majority Leader from 1937 to 1947. Today, the Senate Majority Leader is also from Kentucky, but he is Republican Mitch McConnell. However, the state’s change seems a bit of a long time coming given the social conservatism of the voters and hence their dislike of the politics of the 1960s. This didn’t sway them against Democrats given that many of the state’s Democrats took socially conservative positions, but given the state of the modern Democratic Party on social liberalism, national Democratic influence in Kentucky will likely, save for exceptionally bad years for the GOP, be restricted to urban centers such as Louisville.

Maryland has a bit of a long history as a Democratic state, as it was staunchly anti-Lincoln and Baltimore in particular had many secessionists. However, the nature of the Democratic Party changed as did its voters. However, as late as the 1960s it was possible for a segregationist candidate to win a Democratic primary, thus Republicans, including conservative ones, could win in such circumstances. Indeed, Maryland in the 1950s seems unrecognizable to modern Maryland, with two Republican senators! However, the state grew increasingly favorable to liberalism in the 1960s and 1970s, and Jimmy Carter even won the state in 1980. The state has not voted for a Republican candidate since 1988 and although the state has a Republican governor, he is a moderate and this choice doesn’t translate into national politics.

Missouri, like Maryland, had a long history as a Democratic state since there was a significant level of antagonism to Republicans that dates to the 1860s and 1870s. Indeed, many of Missouri’s residents had sympathy to the Confederacy and some even fought for it, such as President Harry S. Truman’s ancestors. His mother, who had memories of the Civil War and lived long enough to see him become president, reportedly refused to sleep in the Lincoln bedroom when she first visited in 1945. Although there was a New Deal backlash in the state that reached its peak in the 80th Congress when only one true New Deal Democrat represented the state, it really died down after the 1948 election and the state even narrowly voted for Stevenson over Eisenhower in 1956. For a few sessions of Congress, the state only had a single Republican representative, as the spectrum of Democrats in the state ranged from New Dealers like Frank Karsten and Richard Bolling to more conservative types like HUAC’s last chair, Richard Ichord. However, in the mid-late 1970s Republicans started making a comeback in the state, and by 1987 both its senators were Republicans. Indeed, since 1987 there have been only two Democrats who have served as senators from the state. Missouri currently only elects Democrats in its urban centers of Kansas City and St. Louis, and thus the state is one of those in which the urban-rural divide seems quite stark.

North Carolina started as a New Deal supporting state, but there was a figure in its politics who from the very beginning was a bit of a thorn in the side of Roosevelt: Senator Josiah Bailey. It was Bailey who was one of the key authors of the Conservative Manifesto in 1937, which outlined a conservative alternative to the New Deal. The state gradually grew more conservative and more of its elected officials were voting against national Democratic proposals. An election that was indicative of North Carolina’s difficulties with national Democratic politics was the 1950 Senate primary between Frank Porter Graham, a staunch Fair Dealer, and Willis Smith, a conservative. Smith narrowly won this battle and despite Graham’s votes against a Fair Employment Practices Committee and for weakening army desegregation, anxieties over Truman’s civil rights program played a significant role in this primary fight, with Smith’s campaign releasing campaign literature that warned of racial integration. The voters of the state wanted to keep ideological battles within the Democratic Party for now, so Republicans only gradually rose in the state. However, the 1960s changed the state.

In the 1960s, Democrats in the state grew more conservative and Republicans were getting competitive. The state hit peak conservatism after the 1966 midterms, with its delegation getting a score of 85. However, the more liberal elements of the Democratic Party would slowly gain in power and push candidates who took more moderate stances, or, even get incumbents to move leftward in exchange for power, such as Walter B. Jones Sr. Thus, the age of Reagan and Bush I strangely enough proved more of a watershed in moderate Democratic politics than conservatism. These developments as well as the influence of Senator Jesse Helms also helped push more conservative voters into the Republican Party and by the Clinton era retiring Democrats were getting replaced by Republicans. The state now leans Republican, but its current score is a bit high and is likely to go a bit down in the next Congress given a redistricting that will probably flip at least two seats to Democrat.