The last post I wrote was a little break from this series, but now its back. Today’s states are California, Maine, Minnesota, West Virginia, and Wisconsin. 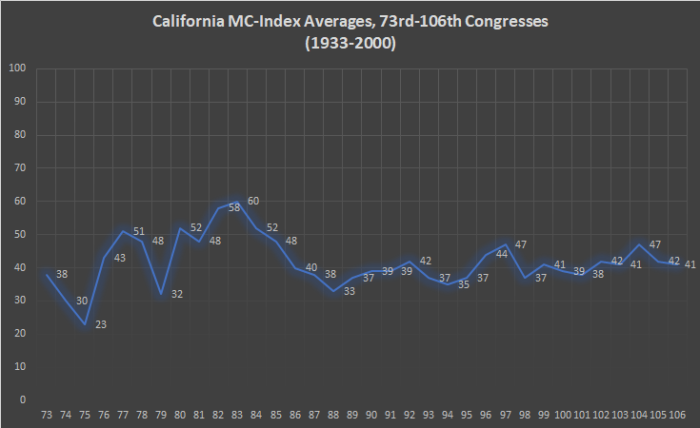 California, as we can see, used to be a state that was much more moderate than now and even had a Republican lean in the 1950s. Indeed, some highly influential Republican presidents such as Richard Nixon and Ronald Reagan were from California and from 1952 to 1988 the state only voted for the Democratic presidential candidate once. This is what makes the following finding rather surprising, and that is that California’s scores were better than I thought they would be in the 1990s. During the Clinton years the state only slightly leaned Democrat and average MC-Index scores were lower when Ronald Reagan first ran for governor in 1966. Indeed, the 1930s, 1960s, and 1970s were all worse than the 1990s for conservatism in the state. The decline of the Republican Party truly began in the Bush years and has accelerated since. While it is possible for the Republicans to win back some House seats in 2020 since Democrats got shockingly good results in the state in 2018, California has become a staunchly liberal behemoth. Its current score is nine points lower than its very lowest from 1933 to 2000. 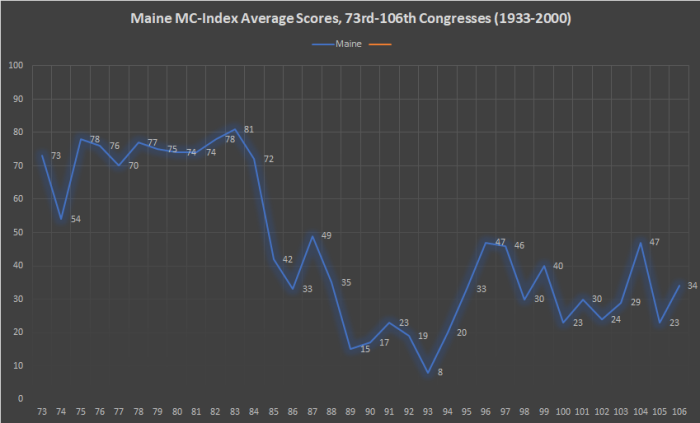 Maine at one time was one of the Republican strongholds of the nation. The state was one of only two to never vote for FDR and elected opponents of the New Deal to the Senate. However, during the 1950s the state’s conservatism began to show cracks as Democratic Party power started to rise with the election of Governor Ed Muskie in 1954 and in 1958 he defeated Republican incumbent Frederick Payne by over 20 points. From this point forward the state’s MC-Index score never rises above a 49. Although Maine has seen some promise for Republicans lately given Trump’s winning of the 2nd district in 2016, the state still leans Democrat and the Republicans they prefer tend to be on the moderate side, thus the state’s delegation on balance remains liberal.

The Democratic Party had for a long time been a weak force in the state: in 1932 FDR was the first Democrat to ever win Minnesota’s vote in a presidential election. Despite this victory, institutionally the Democratic Party remained weak for some time including in St. Paul and Minneapolis. The primary outlet to challenge the Republican Party was the Farmer-Labor Party, which had enjoyed some significant successes in the state. However, the backlash to the New Deal as well as to FDR’s interventionist policies was observable in the state from 1939 until the 1948 election, when Democrats gained three House seats and Senator Hubert Humphrey. The difference here was that World War II had ended and most critically, the Democratic Party merged with the Farmer-Labor Party, the latter previously resisting such a merger due to non-interventionist politics. With the Democrats and Farmer-Labors unified as a political force, the average MC-Index score never went above a 48 after the 80th Congress. Although given the 2016 election Minnesota looks far more promising than it used to be, the last midterms saw four Congressional flips, with the rural 1st and 8th electing Republicans with the suburban 2nd and 3rd electing Democrats. If the Republicans hope to win the state in 2020, they’d better hope the former development is long-term while the latter is temporary.

West Virginia is clearly a much different state from 1933 to 2001 than now. The 1932 election happened to start a long era in which Democrats were dominant but it wasn’t solidified until the 1948 election, when the Democrats made a clean sweep of the state’s Congressional delegation. The Republican presence in the state was quite low: from 1949 to 2001, only four individuals served as Republicans in the House from West Virginia, and only two individuals served, briefly, as Senate Republicans from the state. On the presidential level, the state voted only three times for president from 1933 until George W. Bush’s victory in 2000. In 1996, Bob Dole lost in all but 12 counties but in 2012 and 2016, the Republican candidate won every county. Democratic dominance persisted until the 2014 election on the Congressional level. Now national Democratic politics are radioactive in the state, a scenario which at one time in living memory was unthinkable.

Wisconsin underwent several periods of political development. There was the dominance of the Progressive Party during the first six years of the Roosevelt Administration followed by a conservative resurgence that was especially strong from 1939 to 1942, amplified by the state being strongly non-interventionist. Republicans are a dominant force in the state until shortly after the death of Senator Joseph McCarthy (R-Wis.) in 1957. Conservatism, however, really suffered a decline in the state in the 1970s with a minor resurgence during the Reagan years. The exceedingly high scores in the 1940s can be attributed to the Milwaukee region still voting Republican but since the 1950s it has been safe Democratic territory. Today Wisconsin seems about back in the 1950s in the average conservatism of its lawmakers, with Democrats holding three of eight House seats and one of the Senate seats.