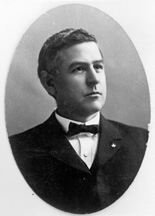 Arthur Brown was not a particularly notable senator as he only served for little more than a year save for two facts about him. First, he was one of Utah’s first two senators, and second, he is the only senator to be murdered by his mistress.

Brown was married twice in his life, the first ending due to his unfaithfulness, with the first wife even trying to shoot the would-be second one and threatening to shoot him as well. In 1876, he left his home state of Michigan to avoid continuing scandal and settled with his second wife, Isabel Cameron, as well as a son. Despite not being a Mormon, Brown was known for advocating for them and thus was politically well positioned to be elected one of Utah’s first senators. In 1896, while a senator, he met Anna Maddison Bradley at the Republican National Convention in St. Louis and the two began taking an interest in each other. By 1898, Bradley and her husband Clarence had separated and by 1899 she and Brown had begun their affair. However, Isabel Cameron was not giving up her husband without a fight. On four occasions, she had the pair jailed for adultery and on one occasion even tried to strangle Anna in a fit of rage. 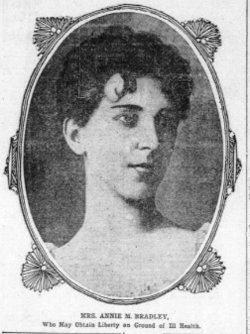 At this point, Brown chose to reconcile with Isabel but simultaneously kept leading on Anna Bradley about marriage and claimed this reconciliation was so he could stop going to jail. This affair also produced two children, multiple miscarriages, and a few abortions. The last one was supposedly performed by Brown himself and resulted in her hospitalization for a lacerated cervix. By 1903, he and Isabel were divorced but he refused to pay alimony (about $4000 a month in today’s dollars), which resulted in his imprisonment until he paid all he owed. In 1905, Isabel died of cancer and at this point Anna was expecting the former senator to marry her. Brown instead chose to take on yet another mistress, Annie Adams Kiskadden, with whom he wrote letters discussing marriage. To make matters worse, in 1906 he disinherited Anna as well as their two children. She wrote on the subject, “I can do nothing but think –yet there is no thought in it. There is a sensation of a whirligig going incessantly — and the din of it is maddening” (Gribben). Anna then hired a detective to tail Brown, who was staying at the Raleigh Hotel in Washington D.C. to argue a case before the Supreme Court. She promptly set out for the place and when she confronted him on December 8, 1906, she described what transpired after: “I asked him if he was going to do the right thing by me. His reply was to put on his coat and start to leave the room. I shot him. I abhor acts of this character, but in this case it was fully justified” (Gribben). Brown died four days later from his wounds at the age of 63. Although Anna Bradley was tried for his murder, her defense counsel succeeded in proving that not only was Brown the father of her two children but also repeatedly led her on with promises of marriage and recognition of her two children. Three witnesses testified that he dictated the following statement, “I say to you that I will make Mrs. Brown get a divorce, and if she does not do it, I will myself get one. I will marry Mrs. Bradley; I will stand by her as long as I live” (Gribben). The jury came to deeply sympathize with her as she had been led on by him for years and ultimately acquitted her on grounds of temporary insanity, resulting in an outburst of cheers and applause in the courtroom.

In 1697, the English playwright and poet William Congreve wrote in his play The Mourning Bride, “Heav’n has no Rage, like Love to Hatred turn’d, Nor Hell a Fury, like a Woman scorn’d”. Arthur Brown had almost certainly been acquainted with this phrase or the more commonly known “Hell has no fury like a woman scorned” at some point in his life, yet his poor moral character on matters of relationships precluded his heeding this wisdom. This was despite coming close to being killed by his first wife for adultery, getting arrested four times for adultery at the behest of his second wife, and Anna Bradley herself knocking some of his teeth out with an umbrella in a fight that appears to have been started by his drinking. Hal Schindler of the Salt Lake Tribune wrote of him, “Those who knew him said he was born with keen intellect, but that he had no sense of moral obligation. And he held grudges…and was a good hater” (Bagley).  Anna Bradley went on to run an antiques store in Salt Lake City until her death in 1950 at 77, but the story isn’t necessarily a happy one for her family. In March 1915, one of her children from Brown, Arthur Jr., stabbed his older half-brother Matthew to death in a dispute over…who was going to do the dishes.