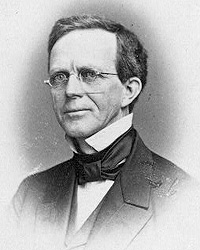 During Abraham Lincoln’s presidency, the man who was consistently senator from his state of Illinois was Lyman Trumbull, a rather unique figure in politics. Although he had started his career in state politics as a Jacksonian Democrat, he was a consistent opponent of slavery and Stephen Douglas’s Kansas-Nebraska Act turned Trumbull to the Republican Party. In 1855, he was elected to the Senate. Trumbull and Lincoln were at this time firm allies and the latter dismissed the notion of challenging the former for his Senate seat should he not prevail in the presidential election. During Lincoln’s presidency, his support of his policies was inconsistent. Although Trumbull voted for the Legal Tender Act which authorized as an emergency measure the printing of bank notes not connected to hard currency, he voted against the Banking Act, which provided a national currency, a longtime goal of the old Whig Party.

Trumbull’s independence seems to have stemmed from two factors. First, many Republicans had been Whigs while Trumbull had been a Democrat, thus Whiggish measures were more likely to meet his disapproval. Second, Illinois was, as it is now, a Democratic state. Although people think of the state as the “land of Lincoln”, at the time it was the land of Stephen Douglas, the man Lincoln tried to defeat in 1858. However, Trumbull’s mixed record on Lincoln’s policies didn’t stop him from embracing Radical Republicanism. He was critical in backing the confiscation of slaves, an important incremental part of abolition.

Trumbull was not tremendously enthusiastic about Lincoln getting a second term…he was more enthusiastic about denouncing Democrats than supporting him during the 1864 election. That year, he co-authored the Thirteenth Amendment and helped engineer its passage in the Senate. Trumbull would also back legislation to ensure that freedmen could get arms to defend themselves from His independence would continue and most notably irk Republicans in 1868 when he voted against impeaching President Andrew Johnson, as he thought the proceedings against him were conducted unfairly. Trumbull in some ways was quite forward-thinking: in 1871, he spoke in favor of creating a national park at Yellowstone.

Trumbull’s Departure from the GOP

He grew disenchanted with the Republican Party during Ulysses S. Grant’s presidency over corruption, his belief that Reconstruction should be ended, foreign policy that he regarded as imperialist, and the increasingly pro-business nature of the Republican Party. His views on civil rights had indeed shifted: while previously he had been a Radical Republican who voted for the 14th and 15th Amendments, he voted against the Ku Klux Klan Act in 1871 aimed at stopping violence against blacks and Republican activists in the South, opposed permitting blacks to serve on juries, and opposed voting rights enforcement. In 1872, he supported Horace Greeley’s campaign and retired from the Senate the following year.

Trumbull subsequently returned to the Democratic Party, serving as counsel for Samuel J. Tilden in the dispute over the 1876 presidential election. In 1880, he ran for governor, unsuccessfully. As the years passed, Trumbull’s views would grow more radical on economics and in 1894 in the midst of an economic depression and disillusion with Grover Cleveland, he switched parties again, becoming a member of the left-wing Populist Party. The following year, the 82-year old Trumbull along with the famed attorney Clarence Darrow, defended future Socialist Party presidential candidate Eugene V. Debs and other unionists over violating the presidential injunction over the Pullman railroad strike before the Supreme Court. He died the next year just as his old Republican Party was firmly embracing the conservatism of McKinley. Trumbull was at heart a progressive as it was understood in the older sense: he stood primarily for the white working class, which is what Democrats of the time stood for. Yet, Trumbull also played an important role in the abolition of slavery and the passage of the Reconstruction amendments.