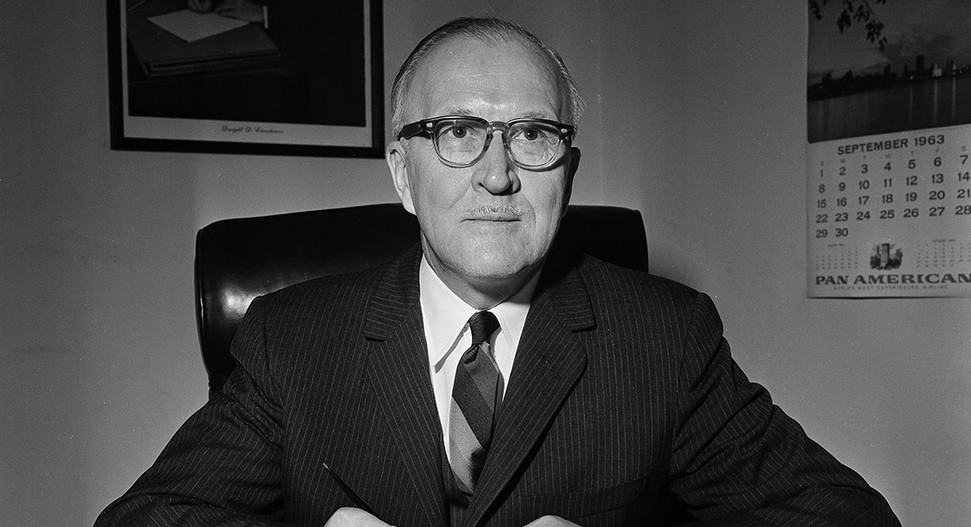 William McCulloch (1901-1980) is not the typical politician profiled as a civil rights advocate: he represented a rural conservative district in Ohio with territory that has not elected a Democrat to Congress since 1936. He was a Republican in the mold of Senator Robert A. Taft, a New Deal critic who wanted to limit American involvement in foreign affairs. As Speaker of the Ohio House of Representatives from 1939 to 1944 he had collaborated with Governor John W. Bricker to turn a state deficit to a surplus and after resigned to serve in World War II despite being in his forties. In 1947 he was elected to the House and as a representative he voted contrary to the “modern Republicanism” preached by Dwight Eisenhower in his opposition to foreign aid and federal aid to education. McCulloch had also followed Republican leadership in opposing a mandatory Fair Employment Practices Committee in 1950 as advocated by Harry S. Truman, instead supporting a voluntary committee which would investigate, report, and recommend on claims of discrimination, but not force action on business. He had been strongly restrictionist on immigration until his vote for the Hart-Celler Immigration Act of 1965; in 1948 he had voted against a compromise measure to admit refugees from war-torn Europe, in 1952 he had voted for the restrictive McCarran-Walter Act, and in 1953 he voted against the Refugee Relief Act. McCulloch also was no slouch on defending state’s rights: he had taken the side of the states over the federal government in the Tidelands controversy and had taken the side of states on their anti-subversive laws when the Supreme Court struck them down. Yet, he harbored an intense dislike for the Jim Crow system, as he saw its injustice firsthand when he practiced law in Florida as a young man. Indeed, McCulloch regularly voted against segregation: he supported Powell Amendments and opposed construction of a VA hospital on the grounds it would be segregated. As ranking Republican on the Judiciary Committee, he began in 1956 to collaborate with Rep. Emanuel Celler (D-N.Y.) on civil rights bills. In 1957, this collaboration saw their first, but very modest success, with the Civil Rights Act of 1957. The Civil Rights Act of 1960 went down similarly, and McCulloch was growing irritated with the Senate for both watering down civil rights legislation to avoid Southern filibusters while simultaneously giving publicity victories to Democrats.

In 1963, McCulloch introduced comprehensive civil rights legislation with liberal Republicans John Lindsay of New York and Charles Mathias of Maryland. This put pressure on President John F. Kennedy to introduce civil rights legislation a few months later and for this measure he sought to win him over to the measure as he knew him to be key to the bill’s success. On July 2nd, assistant Attorney General Burke Marshall met with McCulloch in his Piqua, Ohio office. For his cooperation, he had two conditions: first, he would not accept the Senate watering down the bill again and that any changes made would have to meet his approval. Second, Republicans had to get equal credit for passage. The agreement was struck between the men and McCulloch set to work to win Minority Leader Charles Halleck’s (R-Ind.) approval, which he received. However, there was a problem: Judiciary Committee chair Celler had been pushed by the liberals in his caucus to publicly back a measure so strong-armed in its extension of federal power that it would surely meet defeat in the Senate. With this measure, state and local elections were subject to federal jurisdiction, the Attorney General could intervene in any case in which a person was denied access to a state or local facility, and it forced desegregation of nearly all kinds of businesses, including those regarded as more private in nature (private schools, law firms). McCulloch condemned the measure, stating to the Wall Street Journal, “It’s a pail of garbage” (Purdum). While his opposition to this measure was interpreted by civil rights groups and staunch liberals as a retreat on civil rights, something he understood that they didn’t was that for such a tremendous bill to pass and stand the test of time it would need to be a consensus, not a narrow victory. Narrow victories can be undone or substantively altered and McCulloch wanted what Congress would pass to stick and of course first survive a Senate filibuster. He ultimately got his way, with the voting rights section only covering federal elections, barbershops and beauty parlors were exempted from public accommodations, and the Attorney General no longer had wide powers to file desegregation suits, rather suits would have to be filed by individuals and organizations.

After John F. Kennedy’s tragic demise at the hands of Lee Harvey Oswald, the measure was crucially backed by President Lyndon B. Johnson and was adopted by the House on a vote of 290-130. McCulloch had managed to get 80% of the Republicans on board; he had been an indispensable bridge between the liberal and conservative wings of the party. In the Senate, conservative Minority Leader Everett Dirksen of Illinois and moderate Minority Whip Thomas Kuchel of California lobbied hard for the bill and met with similar success by managing to defeat the filibuster on a vote of 71-29, with the bill itself passing 73-27. Although the Senate had made changes to the House bill, they were minor and acceptable to McCulloch. Johnson signed the bill into law on July 2, 1964, exactly one year after McCulloch and Marshall’s deal. Along with the people I have already named, others who deserve substantial credit for passage included Senator Hubert Humphrey (D-Minn.), Speaker of the House John McCormack (D-Mass.), and Reps. Clarence Brown (R-Ohio) and Richard Bolling (D-Mo.). McCulloch similarly backed the Voting Rights Act of 1965 but had preferred his version, on which he had collaborated with Minority Leader Gerald Ford. His version suffered the misfortune of also being preferred by most Southern Democrats, ensuring its failure in the Great Society Congress. Unlike many of his conservative colleagues, he also backed fair housing legislation, which many of them regarded as an intrusion on property rights. In 1967, McCulloch was tapped to serve on the Kerner Commission to investigate that year’s race riots. The commission, which was dominated by liberals, largely placed the blame on white racism and warned of an increasingly de facto segregated society, with blacks in urban areas and whites in the suburbs. The Kerner Commission’s conclusion and recommendations were rejected by President Johnson.

The 1960s would change McCulloch somewhat ideologically: in 1961, the first year of the Kennedy Administration, both Americans for Democratic Action (ADA) and Americans for Constitutional Action (ACA) considered him a staunch conservative, with the former scoring him a 0% and the latter scoring him a 100%. In 1968, the last year of the Johnson Administration, he got a 42% by ADA and a 61% by ACA. This newfound moderation carried on to the Nixon Administration, and McCulloch was somewhat critical of the administration’s approach on civil rights. He opposed the Nixon Administration’s attempt to apply the Voting Rights Act nationally, supported the Philadelphia Plan, and had mixed feelings on employing busing to desegregate schools. In 1971, he was one of 24 representatives to vote against the Equal Rights Amendment. Later that year, McCulloch announced his retirement on account of poor health, which had resulted in his being absent for much of that year. Accolades poured in for him, including from Jacqueline Kennedy Onassis, who wrote to him, “I know that you, more than anyone, were responsible for the civil rights legislation of the 1960’s, and particularly for the Civil Rights Act of 1964” (Onassis) .

Only in recent years has McCulloch received attention for his efforts on behalf of civil rights and his role in ensuring the passage of the Civil Rights Act of 1964. Traditional narratives on civil rights placed little to no emphasis on his role, and this is because he was not a great narrative fit: a rural conservative Republican. It reminds me of the story of Paul Revere’s midnight ride as popularly told in the poem by Henry Wadsworth Longfellow, but the sole focus on Revere obscures the role of the four other riders in warning the colonists of the approach of the British: William Dawes, Samuel Prescott, Israel Bissell, and Sybil Ludington. Israel Bissell made the longest ride of the five, yet his name was not as easy to fit in a rhyme.

3 thoughts on “William McCulloch: The Civil Rights Engine of Congress”