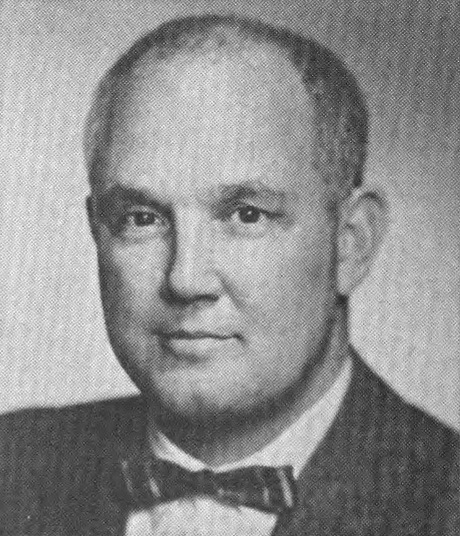 The 1950 election constituted a conservative backlash wave against Harry S. Truman, the Fair Deal, and the lack of progress in the Korean War. One of the congressional freshmen was Thomas Bradford Curtis (1911-1993) of Truman’s state of Missouri. He was far from the stereotypical slick or charismatic politician: he was balding, pudgy, always wore a bowtie (I haven’t found a single picture of him without one!), wore ill-fitting suits, sounded like a country bumpkin, and could come off at times as a curmudgeon. However, he was also highly educated, intelligent, kind, honest, and hard-working. Curtis became well-respected for his expertise as an economist and was independent of the will of powerful constituencies: the headquarters of Monsanto was located in his district, and they were strong supporters of protectionist legislation while Curtis backed trade liberalization. Although Curtis was a conservative who was a strong believer in free enterprise and limited government, he departed from the Old Guard of the Republican Party in a few ways, among the most notable were on civil liberties and trade. Most notably on the latter, in 1962 he proved of great assistance to the Kennedy Administration in the passage of the Trade Expansion Act.

Curtis was also a consistent critic of the Republican leadership for being, in his view, too willing to go along with the Democratic majority and in 1958 he voted to oust Minority Leader Joe Martin of Massachusetts. The leadership of Martin’s successor, Charles Halleck of Indiana, was also unsatisfactory to him and in 1964 he joined a group of younger Republican legislators known as the “Young Turks” who voted to replace him with Gerald Ford of Michigan.

Curtis came out often and early for civil rights, starting with his 1951 vote against the establishment of a segregated VA hospital. He backed the Eisenhower civil rights bills, Powell Amendments (block aid for segregated schools), and the Civil Rights Act of 1964 and Voting Rights Act of 1965. Curtis often participated in these debates in Congress and tried his best to attract the black vote to the Republican Party but even he had his limits on civil rights legislation: in 1962 he voted against banning the poll tax by constitutional amendment as he thought it should be done by legislation and he voted against the Civil Rights Act of 1968, establishing fair housing laws. Curtis considered the pursuit of civil rights to be both consistent with the Lincoln heritage of the Republican Party and with Judeo-Christian morality.

In the 1960s, he was a staunch opponent of the Great Society including the Economic Opportunity Act of 1964 and Medicare. Curtis played an active role in the debate on Medicare and even offered the Republican substitute to Medicare, but in the Great Society Congress this went nowhere. Medicare and spending programs disturbed Curtis so much his former legislative assistant J. Robert Vastine stated “I remember him being very disgruntled and working very, very long hours and being sick with a bad cold the whole time. He was very distressed about that program and other programs” (Vastine, 21). He predicted inflation would occur as a result of extensive social and war spending.

In 1967, Curtis led the charge to deny Rep. Adam Clayton Powell (D-N.Y.) a seat in the House for his unethical behavior, and although he succeeded for the 90th Congress, the Supreme Court ordered his seating in 1969. Curtis was also a master parliamentarian and for years served as the parliamentarian for the Republican National Convention. Highly popular in his district for his independent minded honesty, Curtis could have, according to his former legislative assistant J. Robert Vastine, held his seat for the rest of his life had he wanted to, but he wanted to move on to the Senate. In 1968, he ran to replace retiring Democrat Edward V. Long, but was too devoted to his current job to effectively campaign for the next one and lost by only two points to Democrat Thomas Eagleton. According to Vastine, Eagleton had bought the vote of the black wards in St. Louis, a common practice among the state’s Democrats. Although Curtis wouldn’t have won the black vote in the state whether the wards had been bought or not, it may have made the difference.

From 1969 to 1973 Curtis served as Vice President and general counsel for Encyclopedia Britannica and from 1972 to 1973 served as chair of the Corporation for Public Broadcasting despite having been a critic of arts funding while in Congress. In this post, he accused Nixon Administration officials of trying to politicize the organization. In 1974, he had a rematch with Eagleton but only got 39% of the vote. That same year, he was appointed the first head of the Federal Election Commission and managed to butt heads with President Ford for actions that he felt undermined the commission. Curtis resigned, and, ever the rebel, backed Ronald Reagan in the 1976 presidential primary and attempted through parliamentary tactics to get him the nomination at the convention. From then forward, Curtis was a staunch Reagan supporter and played a major role in authoring his platforms in 1976 and 1980. He retired to Pier Cove, Michigan, and died of a heart attack on January 10, 1993.

Overall, I think Thomas B. Curtis was one of the finest people who served in Congress as he managed to have an eighteen year career there largely based on his integrity and his willingness to speak and act on what he believed was right. It is a pity that he didn’t get elected to the Senate, but there tends to be a ceiling in politics for people who rock the boat like Curtis did.