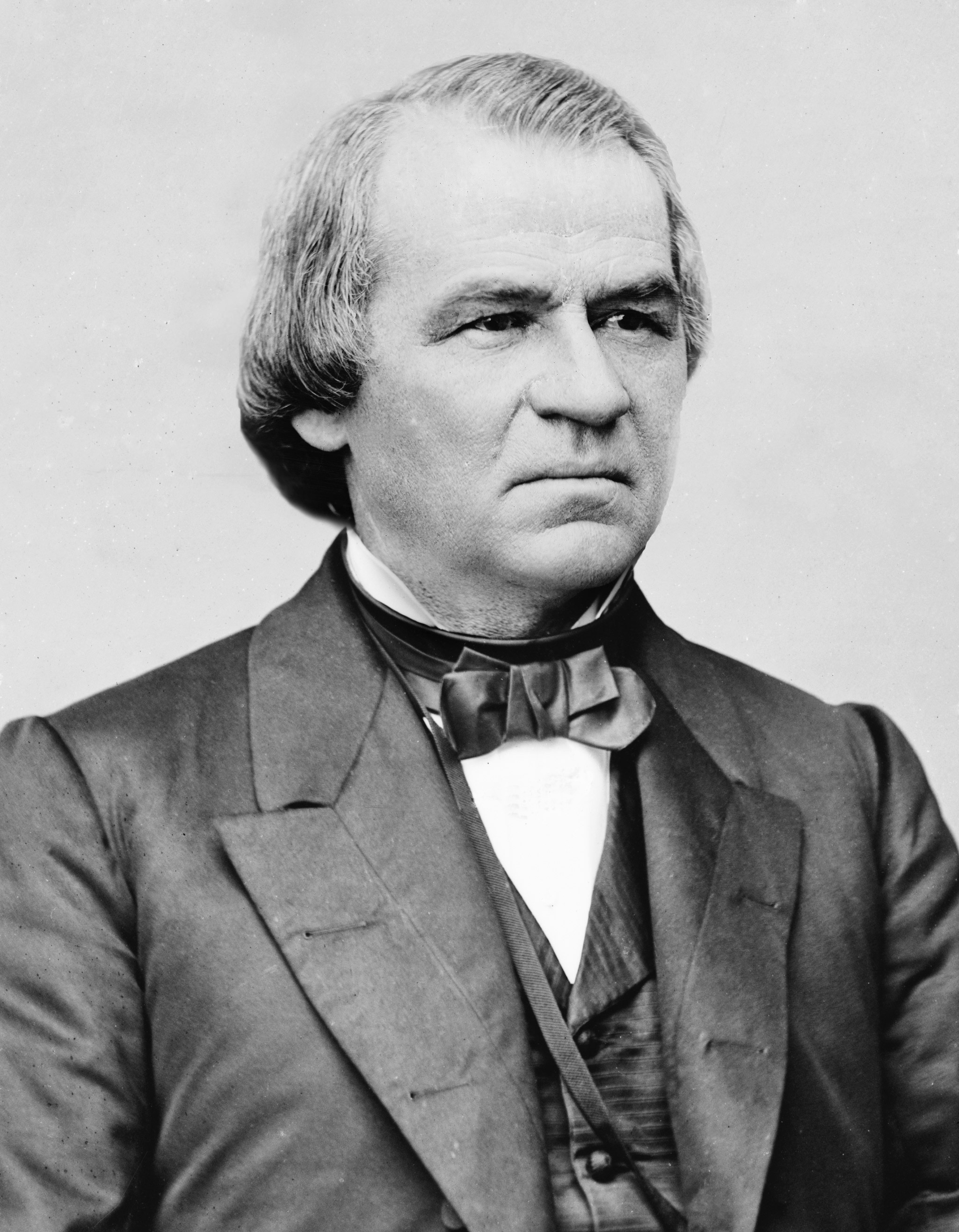 Andrew Johnson was a weak president. Even his historical defenders in the Dunning School tended to admit his poor leadership while defending his aims and intentions. These aims and intentions were populist in that he wanted government to aid poor farmers and laborers…provided they were white. The only reason Johnson ultimately opposed slavery was on the grounds that it harmed poor white farmers and he opposed any civil rights measures beyond abolition. Thus, as president, he vetoed legislation aimed to protect and stabilize the black population in the South, including the Freedman’s Bureau and the Civil Rights Act of 1866. Although he had no official power to stop the 14th or 15th Amendments, he vocally opposed both. Johnson was clearly interested in Reconstruction meaning a return to how the South was before the Civil War, sans slavery. The Republican Congress was eager to run Reconstruction and was at loggerheads over Johnson’s policies. In 1867, they passed the Tenure of Office Act over Johnson’s veto primarily for the purposes of protecting Secretary of War Edwin Stanton, a major pusher of Radical Reconstruction. Johnson blatantly violated this law when he dismissed Stanton during a Congressional recess and set the stage for impeachment.

On February 24, 1868, spearheaded by Rep. Thaddeus Stevens (R-Penn.), Congress voted to impeach Johnson. Like attitudes on impeachment of the current president, the vote on impeaching him was deeply partisan: all Republicans voted for, and all Democrats voted against. Debate and rhetoric were heated on Johnson, with Rep. William D. Kelley of Pennsylvania, a leading Radical Republican, declaring “Sir, the bloody and untilled fields of the ten unreconstructed states, the unsheeted ghosts of the two thousand murdered negroes in Texas, cry, if the dead ever evoke vengeance, for the punishment of Andrew Johnson” (Brockett, 501) .

The impeachment proceeded to the Senate for trial, where Johnson’s defense was led by future Attorney General William Evarts and Attorney General Henry Stanbery, the latter whom the Republican Congress would punish by preventing his reappointment. Johnson himself never appeared before the Senate on advice of his counsel. Ultimately, seven Senate Republicans broke ranks to prevent Johnson’s removal from office: Lyman Trumbull of Illinois, James W. Grimes of Iowa, Edmund G. Ross of Kansas, William P. Fessenden of Maine, John B. Henderson of Missouri, Joseph S. Fowler of Tennessee, and Peter G. Van Winkle of West Virginia. This was enough for him to avoid removal by one vote. Although his presidency was saved, his reputation was not and it became abundantly clear that Congress was to be supreme in the near future rather than the presidency. Although some of the senators who had broken ranks, like Lyman Trumbull of Illinois, did so out of a conviction that the trial was not done fairly, others such as Edmund G. Ross of Kansas almost certainly were bribed for their votes. This historical tidbit did not make John F. Kennedy’s laudatory Profiles in Courage entry on Ross. Yet another factor was the fact that since Johnson had no vice president, his successor would have been Benjamin F. Wade of Ohio, an irascible Radical Republican. One newspaper reported that “Andrew Johnson is innocent because Benjamin Wade is guilty of being his successor” (Stewart, 317). Wade being successor was certainly the deciding factor in the case of Senator William P. Fessenden (R-Me.), a moderate who despised him.

Despite Johnson’s fall in reputation, there would be a final triumph in his life as well as a few after death. In 1875, he was again elected to the Senate from Tennessee as a staunch critic of Reconstruction, but he succumbed to a stroke only four months after his swearing in. The Tenure of Office Act was repealed during the first Cleveland Administration and the Supreme Court declared in 1926 that the Tenure of Office Act had been an unconstitutional interference in executive power. As I mentioned in a previous post, there was even a movie made in 1942 portraying Johnson as a hero. Said movie resulted in protests and even calls for its censorship and destruction! While of course I would disagree with the film’s portrayal of Johnson, I disagree even more with the notion that we should censor or destroy a film presenting an alternative view. Anyway, since the 1960s, his reputation as a merely a middling president who fought against congressional usurpation of presidential powers fell to competing for worst for his active hindering of Reconstruction.

Today, Democrats aim to impeach President Trump despite not holding both houses of Congress. Unless a “smoking gun” should arise of violating the law, he will not be convicted by a Republican Senate.

Brockett, L.P. (1872). Men of our day: or biographical sketches of patriots, orators, statesmen, generals, reformers, financiers, and merchants, now on the state of action: Including those who in military, political, business, and social life, are the prominent leaders of the time in this country. Philadelphia, PA: Ziegler and McCurdy.