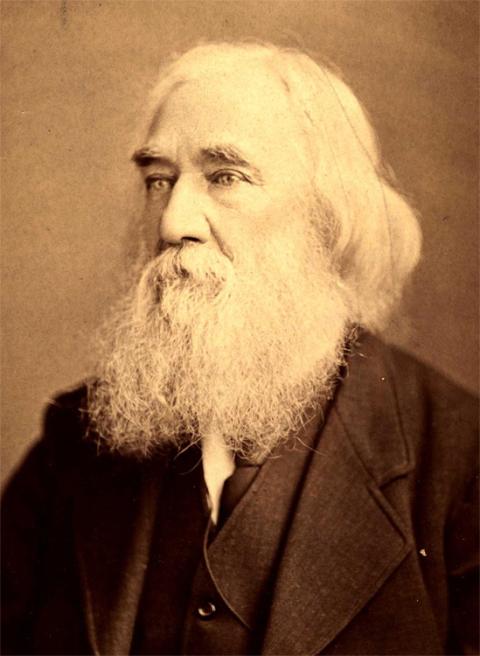 Lysander Spooner (1808-1887) was a most unusual man in American politics yet he carried influence in his time. It can be safe to say that no one agreed with him on everything, thus he has fans who are anarcho-capitalist and anarcho-socialist. Spooner was a lawyer who often took up some odd causes, including defending Millerites on the charge of vagrancy. They had stopped working because they believed the world was coming to an end. He was also a militant foe of slavery who advocated a slave rebellion and tried to assemble a group to rescue John Brown after the Harpers Ferry raid. He wrote The Unconstitutionality of Slavery (1845), which held that the Constitution prohibited slavery and the U.S. was not constitutionally obligated to defend the institution. This view was subsequently embraced by Frederick Douglass. However, he supported the South’s seceding from the US as a legitimate course of action and wrote No Treason: The Constitution of No Authority (1867), which opposed treason trials for Confederates.

Spooner opposed any regulation of interest rates, any occupational licensure, and any restrictions on the issuance of private currency. Yet, he also opposed the wage labor system (wanting individual ownership of means of production instead), which leads to socialists identifying with him in addition to his membership in the socialist organization First International. Spooner’s most famous venture, however, was distinctly capitalist in nature. In 1840, it cost 18.75 cents to send a letter from Baltimore to New York (which was 25% of average wages), so he decided to form his own business in 1844, American Mail Letter Company. The competition managed to pressure the postal service to lower stamp prices to 5 cents. The company lasted for seven years and won legal challenges against its authority, but Congress passed a law mandating a legal monopoly for the postal service in 1851.

Spooner’s influence continues today and The Unconstitutionality of Slavery was even cited by Justice Antonin Scalia in the Supreme Court’s 2008 case, District of Columbia v. Heller, when he wrote that the right to bear arms is necessary to fight slavery. Justice Clarence Thomas also cited his book in another gun control case, McDonald v. Chicago. Spooner was overall a radical individualist, wishing for maximum autonomy for the individual.