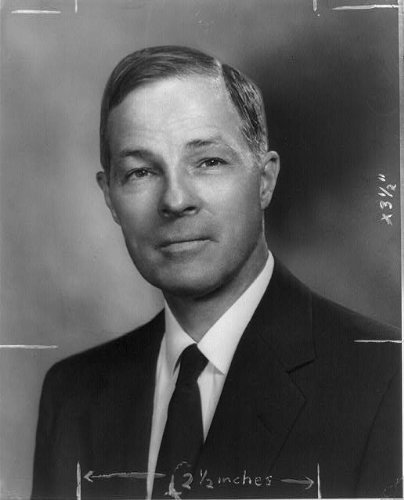 Today Kentucky has for politicians who oppose American military involvement abroad in Senator Rand Paul and Rep. Thomas Massie. Their positions have gotten more of a hearing as of late with the Trump Administration and its intellectual father, Steve Bannon, opposing the notion of “endless wars”. Many years ago, however, there was a lone Kentucky politician who held such a view, and this was the bible-thumping Republican Eugene Siler (1900-1987).

Elected to Congress in 1954 after serving as a judge on the Kentucky Court of Appeals, Siler was a staunch social conservative and a fiscal watchdog. He was a very religious man and as a judge frequently quoted scripture. Siler called for Bible study in schools and was dismayed over Supreme Court decisions opposing school prayer. He put his social views into his work as well as he would decline divorce cases and would not represent alcoholics. Siler opposed alcohol and sponsored legislation to ban liquor and beer advertising in all interstate media. His religious conscience also extended to war and he was highly averse to using military force.

Siler’s fiscal conservatism came in his calls for reducing federal spending and his uncompromising opposition to foreign aid. On matters of social welfare, he repeatedly opposed public housing as well as strong minimum wage legislation. He also opposed Congressional junkets and other things he regarded as a waste of taxpayer money. On civil rights, Siler’s record was mixed. He opposed the Eisenhower Administration’s civil rights bill in 1956 only to support the legislation the next year. In 1960, he supported a stronger civil rights bill than was eventually adopted but he opposed cutting federal funding to segregated schools. He also voted against the 1964 Civil Rights Act, as did all but one of Kentucky’s representatives. However, Siler made some exceptions to his conservatism. He backed several federal anti-poverty measures, including the Economic Opportunity Act of 1964. Siler also supported flood control legislation, which benefited his district. His greatest distinction, however, is that of being the only member of the House of Representatives to register opposition to the Gulf of Tonkin Resolution.

He did not run for reelection in 1964 but the Vietnam War would occupy his focus and he sought a return to politics with a 1968 run in the Republican primary for the Senate on the platform of getting the troops home by Christmas. His bid failed and Siler practiced law until his death in 1987.

Siler was what we would call a “compassionate conservative” and by no means was a purist on questions of the federal government. He would fit in with the religious right of today on social questions but his aversion to war as well as his endorsement of some major social legislation would set him apart. Were it not for President Trump’s personal peccadilloes of the past, Siler would probably find himself favorable to him.