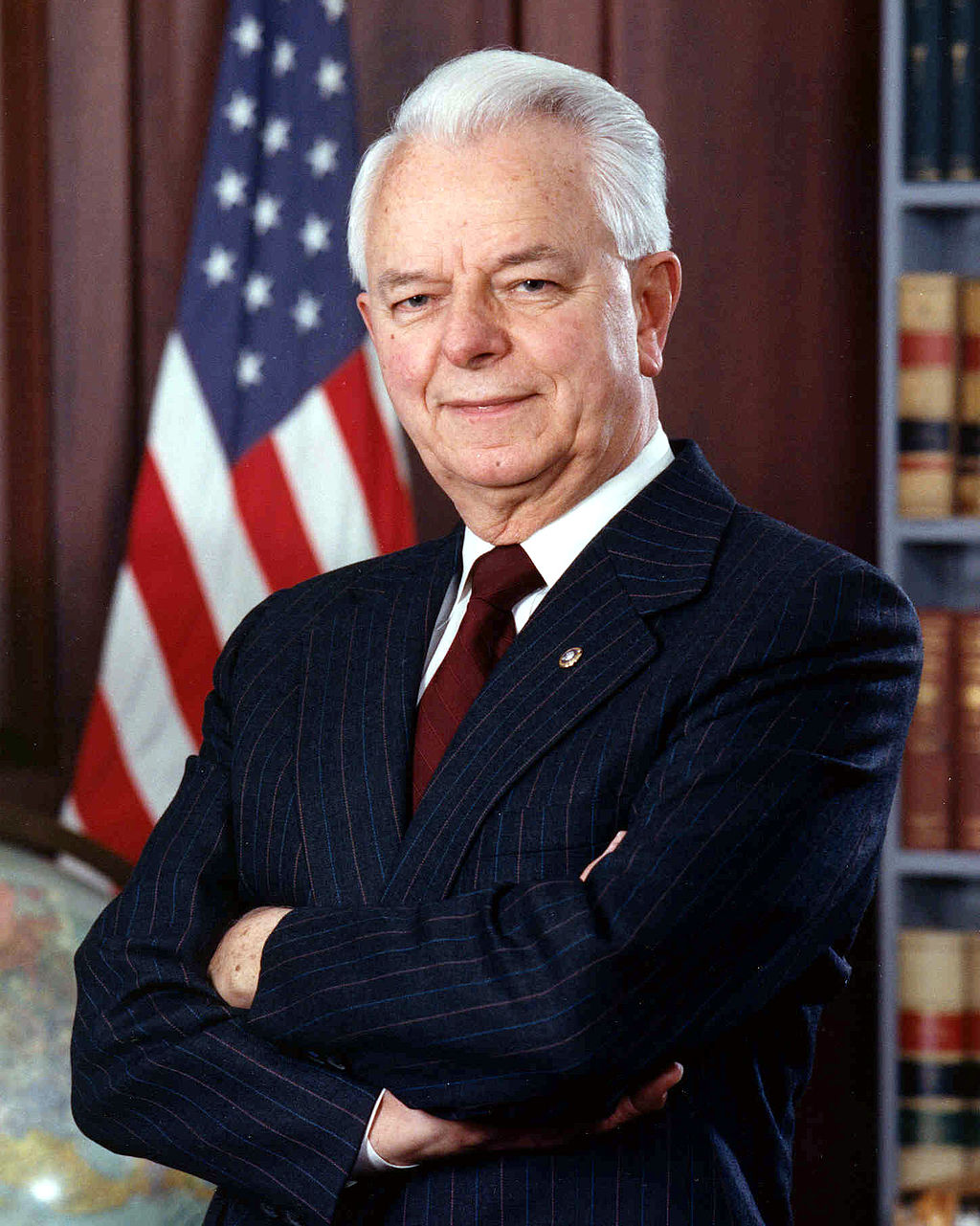 On November 24, 2018, I wrote and published an article on this particular senator. I have again written about him partly because I forgot that I did so in the past, but also because I feel I have a bit of a more complete profile on him, particularly on his past and details of his record. I wrote a good lot here so I’m not going to let that go to waste.

In 1942, a young backwoods butcher from Sophia, West Virginia who knew just about nothing but work in his life was eager to recruit for an organization that he regarded as fundamentally patriotic and protective of community life and standards: the Ku Klux Klan. He approved the organization’s opposition to communism and interracial relations, both of which were common views in his time and place. As a boy in the 1920s, he had seen his adoptive father march with the KKK and thus the organization was backed by a family role model. The young man wrote to the Grand Dragon of his area about forming a Klan chapter, and he wrote back that he would visit if he was able to recruit 150 people, and recruit he did among his friends and neighbors. The visiting Grand Dragon, Joel Baskin, told him, “You have a talent for leadership, Bob…the country needs young men like you in the leadership of the nation” (Carlson). From this single sentence uttered by a leading member of a marginalized hate group, an obscure butcher embarked on a path that would lead him to become the longest serving senator in American history. The young man’s name was Robert Byrd (1917-2010).

After serving in both houses of the state legislature, Byrd ran for Congress in 1952. Although his opponents would use his 1940s Klan leadership role against him, he never lost an election. Byrd was at heart a populist Democrat who was wedded to the philosophy of the New Deal but who embraced socially conservative stances on numerous issues. In 1958, he defeated Republican Senator W. Chapman Revercomb for reelection by almost 20 points in what was a bad year for Republicans in a Democratic state. From then on, he would only once get less than 65% of the vote in an election. As a young senator, Byrd studied the rules and soon became a master parliamentarian in the chamber he came to love and cherish. In the 1960s, he took a number of stances that have attracted criticism, such as his record on civil rights. While Byrd had voted for both of the civil rights bills during the Eisenhower Administration as well as a poll tax ban in 1962, he took exception to the Civil Rights Act of 1964. He opposed the entire bill save for the weak voting rights section and participated in the Southern filibuster, himself speaking for 14 hours against the bill. Byrd similarly voted against the Voting Rights Act of 1965 and opposed its extension in 1970. He was unique in that he was the only Senate Democrat from outside the former Confederacy to vote against both bills. In 1967, Byrd was one of eleven senators to vote against the confirmation of Thurgood Marshall, the first black Supreme Court justice, again the only senator from outside the former Confederacy. His civil rights stances were a notable break from Democratic leadership as he had been a solid supporter of the Kennedy Administration in the Senate and had embraced much of the Great Society, including the Economic Opportunity Act and Medicare. Byrd also was known as one of the leading cheerleaders for FBI director J. Edgar Hoover and was a hawk on the Vietnam War. Although he was often sympathetic to left-wing positions on social welfare and redistribution of wealth, he was no fan of the cosmopolitan left. Although his stance on civil rights might have today stopped his Senate ambitions, Byrd was simply too valuable to the Democrats.

He was one of the hardest workers in the chamber and developed such an extensive knowledge on the Senate that in his later years he wrote an award-winning four-volume series detailing the history of the chamber, The Senate: 1789-1989: Addresses on the History of the Senate. Byrd was both a student of the Roman Republic and American government and was mindful of the powers and prerogatives of the Senate regardless of who was president. He would say that he served “with” and not “under” presidents and thought the three branches of government ought to be equal in powers as constitutionally intended. Byrd didn’t initially attract a lot of press attention on Capitol Hill, that is, not until he defeated Ted Kennedy for Majority Whip in 1971. Kennedy’s reputation had been harmed by the Chappaquiddick incident in addition to the fact that he was spending a lot of time partying. The work horse had prevailed over the show horse. He further gained in reputation with his ability to whip party votes and was able to be an effective middleman between the liberal and conservative wings of the party. Byrd’s record on civil rights also changed as he moved into leadership and in 1975 he voted to extend the Voting Rights Act for seven years and on multiple occasions he apologized for his previous involvement with the KKK as well as his vote against the Civil Rights Act of 1964. He subsequently adopted national Democratic views on these issues for the most part. In 1977, he was elected Majority Leader. Now the most powerful senator, Byrd used his position to help West Virginia secure government funding for projects large and small, necessary and dubious. He was also an accomplished fiddler and even released an album titled Mountain Fiddler in which he also sang. In 1981, he for the first time entered the minority when Republicans gained control of the chamber. In 1989, he gave up his post as Majority Leader to become chair of the Appropriations Committee, where his power to appropriate pork for West Virginia continued. In 1991, Byrd voted against the confirmation of Justice Clarence Thomas but in subsequent years he voted for conservative nominees to the court. That year he voted against the Gulf War, which stood as a contrast to his Vietnam War hawkishness and portended one of his more famous dissents.

In 1996, Robert Byrd voted for welfare reform but didn’t support other proposals to overhaul welfare programs such as making food stamps block grants. He also didn’t care much for the personal reputation of Bill Clinton despite voting for his acquittal and didn’t campaign hard for Al Gore in 2000, Bush winning West Virginia year. Although initially warm to him, Byrd came to be one of the more notable opponents of his administration and voted against the Iraq War. In 2004, he wrote Losing America: Confronting a Reckless and Arrogant Presidency, in which he condemned the Iraq War as being unnecessary and the Administration’s “war on terror” policies as being corrosive to civil liberties. Byrd also opposed the Bush tax cuts and efforts at cutting the domestic budget. However, he maintained his opposition to some socially liberal policies, such as gay rights, while having a mixed record on abortion. On May 19, 2008, he endorsed Senator Barack Obama for president. He supported most of the Obama Administration’s policies and on December 24, 2009, he cast a vote ending debate on the Affordable Care Act. Byrd died the following year at the age of 92. The score he received for his fifty-seven years in federal office on Mike’s Conservative Index was a 29%, indicating he was moderately left overall in his career.

Byrd’s death marked the end of the traditional Democrat and symbolized both the end of the sort of Democrats working class whites supported as well as of the ability to insert pork into legislation. After the 2010 election, incoming Speaker John Boehner (R-Ohio) banned earmarks, a policy that would have undoubtedly mortified the late senator. The absence of Byrd’s type of Democrat in the modern party I also find has contributed to the increasingly populist tone of the Republican Party and rural regions turning more and more against the strongly cosmopolitan Democrats.