In 1907, the American public faced an economic crisis that necessitated reform: the aptly named Panic of 1907. There were runs on banks and President Theodore Roosevelt had to get the help of master banker J.P. Morgan, who had previously been crucial to ending the Panic of 1893. He was able to use his influence and money to alleviate the crisis by convincing bankers to keep the money flowing in the economy. The Independent Treasury system, which on paper was supposed to regulate money supply, proved tremendously weak and unable to cope with the crisis. This panic got the attention of people who were previously skeptical to the notion of a national bank as well as that of the powerful Senator Nelson Aldrich (R-R.I.). Aldrich, a conservative, was reluctant to get the federal government involved in control of the money supply, but found that European central banking provided much greater stability. In 1910, Aldrich and a group of bankers which included future Congressman A. Piatt Andrew met at Jekyll Island, Georgia, to formulate a plan. The Aldrich Plan was crafted, in which bankers would act as federal officers and exercise control over the money supply through fifteen regional banks. This plan was objectionable to progressives, who considered it a surrender to the “money trust” and was defeated in a House vote. In 1912, the Pujo Committee investigated the notion that a “money trust” existed and discovered that three bankers – J.P. Morgan, George F. Baker, and James Stillman ran a cartel that controlled eighteen major financial corporations and that a small group of bankers exerted control over the transportation, telecommunications, manufacturing, and mining industries. The committee also found that they were able to manipulate the New York Stock Exchange and had attempted to dodge interstate trading laws. They exercised control over the money supply of the United States, and this was a motivating factor for the creation of central banking system. An up and coming figure recognized the need for centralized banking while simultaneously being concerned about the power of bankers: Woodrow Wilson. 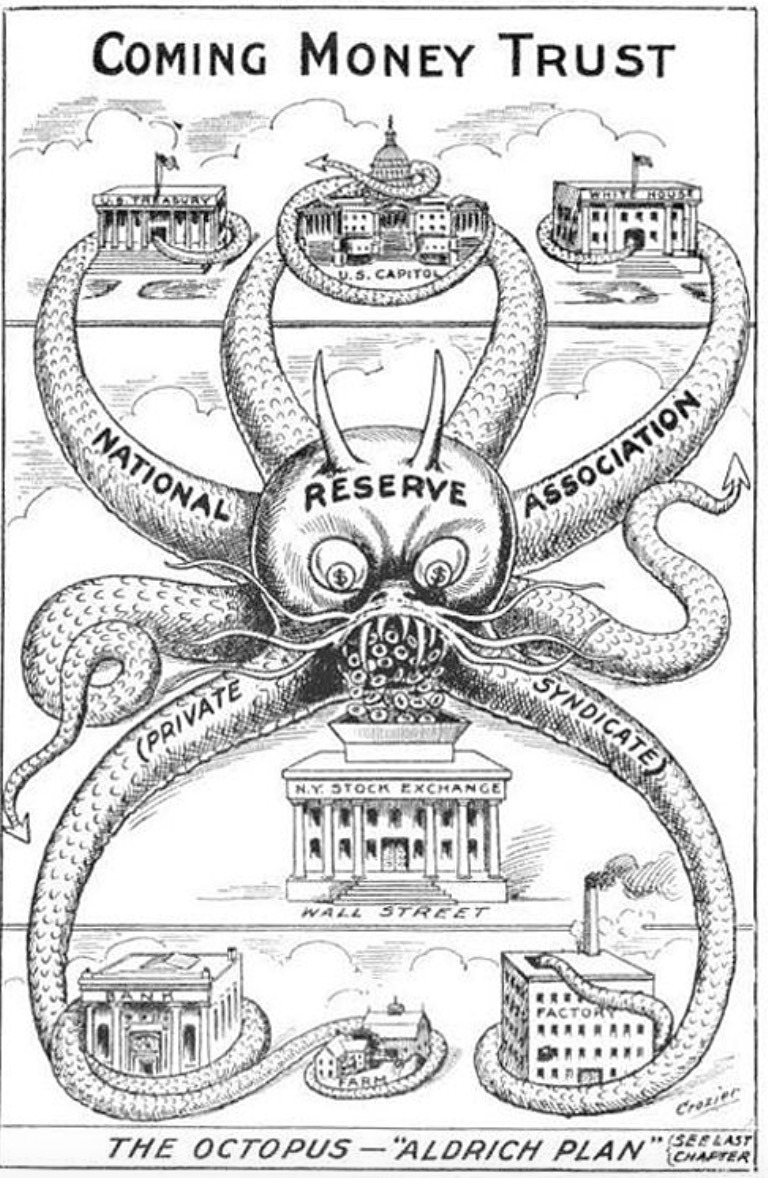 Given the split of the Republican Party in 1912, Wilson was elected president and in pushing for the Federal Reserve he found two key allies: Senator Robert Owen (D-Okla.) and Representative Carter Glass (D-Va.). Owen was a progressive while Glass was more moderate in those views and more receptive to banker concerns. The Democratic Party had traditionally opposed centralized banking as Presidents Jefferson and Jackson both opposed a central bank, with the latter ending the Second Bank of the United States. Democrats had voted against the National Bank Act under Lincoln and many in their ranks were initially skeptical of this plan. However, Wilson, Owen, and Glass crafted a compromise in which the bank would be partly public and partly private. An independent Federal Reserve Board was established that governed the Federal Reserve banks (to be headed by bankers) and consisted of seven members, one who is a representative of the banking sector. The traditional advocates of centralized banking, Republicans, objected to this arrangement as they believed that bankers should be at the helm. 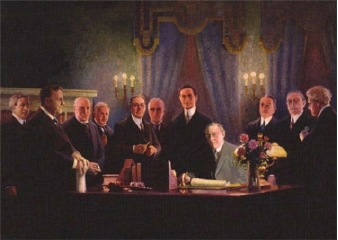 Wilbur G. Kurtz Sr.’s depiction of the signing of the Federal Reserve Act.

In 1913, the Federal Reserve Act passed with the support of all but three Democrats in the House and a solid majority of Republicans in opposition in both chambers. The vote roughly broke down with anti-banker politicians voting for and pro-banker politicians voting against, but there were exceptions. The three Democrats, for instance, were sticking to the traditional Jacksonian opposition to central banking and some progressive Republicans such as Robert La Follette voted against it as too favorable to banks. On the other ideological side, ultra-conservative Senator John W. Weeks of Massachusetts was willing to accept this measure for the sake of stability despite the creation of a Federal Reserve Board and the fact that it had only one representative from the banking sector.

Since then, there have been certain narratives that have basis in La Follette’s objections that have taken hold among the populist right, many of which come from G. Edward Griffin’s book, The Creature from Jekyll Island (1994). Griffin holds that the bank is basically nothing more than the money trust but by government and banks and that bankers manipulate nations into war for their profit, one of the most prominent examples being World War I. This is both conspiratorial and out of sync with the traditional critique that the bank would have been better being run entirely by bankers and would strike many of the Federal Reserve’s principal supporters as strange, as they intended the measure as both a stabilizing measure and a curb on banker power. The primary supporters of the Federal Reserve were men of the left, while its opponents were primarily men of the right. Indeed, La Follette was an exception among Republicans in his own state, who voted for it. More typical was Senator George Norris (R-Neb.), another notable progressive, who voted for it as a progressive reform. The Federal Reserve ultimately replaced the “money trust”, which had been the private sector effort to address the issues of money supply in the economy, among other things. Lastly, I find it outright stunning that Griffin, a lifetime member of the John Birch Society, would find himself on the exact same page on banks and American involvement in World War I as Robert La Follette, a man who called for the nationalization of railroads and would almost certainly have been supportive of the New Deal given that his son, La Follette Jr., was. Politics makes for strange bedfellows!