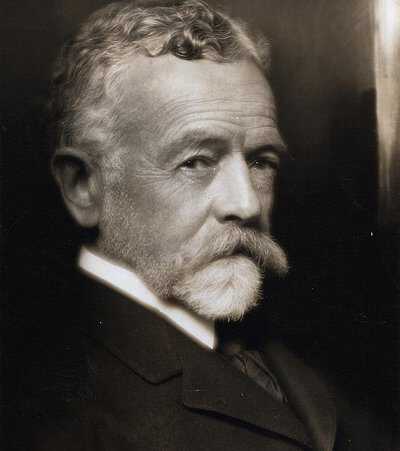 During World War II, Hollywood producer Darryl F. Zanuck, an admirer of President Woodrow Wilson, wanted to make a film to honor him, and the product was 1944’s Wilson. Although the film won five Oscars and many critics of the time praised it, it was a box office bomb and Zanuck subsequently eschewed reference of the film in his presence. A notable part of the film is that it portrays Wilson’s chief rival, Senator Henry Cabot Lodge, as a villain. Wilson was a film made in a period of Democratic political primacy and it was not the first film to commemorate a Democratic president and vilify his Republican foe. The film Tennessee Johnson (1942) made a hero out of the 17th president while making the elderly, dying Thaddeus Stevens the villain. Stevens has a much more positive reputation today while Johnson has a much lower one. Although modern times have not been as kind to Wilson as they were in the 1940s, there has been no similar revival for Lodge.

Henry Cabot Lodge was born on May 12, 1850. That was the year of the final major compromise on slavery, the Compromise of 1850, which was a series of five bills, among which admitted California as a free state and the Fugitive Slave Act. Many at the time thought and hoped this to be the final resolution of the conflicts between free and slave states, but the next fifteen years proved, to say the least, tumultuous. Lodge grew up in this political environment and the Civil War had left him with a deep impression that good had prevailed over evil with the slaves freed and the union restored. Furthermore, he thought that the United States could and should be the supreme moral actor on the world stage, fighting similar “good vs. evil” battles abroad. Lodge backed increasing America’s influence through growing the navy, embracing the views of the incredibly influential Admiral Alfred Thayer Mahan, who held in his books that powerful nations had in common strong sea power. However, this view was coupled with the notion that America should first and foremost be out for its own interests, or you could say, “America First”! Lodge became a prime advocate of the American version of imperialism, backing the annexation of Hawaii and the Treaty of Paris, which secured US control over former Spanish colonies. He regarded America’s version of imperialism as more humane than that of the European powers and that the expansion of American ideals and business would serve to uplift people around the world. With this view in mind, he strongly embraced the foreign and military policies of Presidents Harrison, McKinley, and Roosevelt. Lodge was downright enthusiastic about Roosevelt’s “big stick” foreign policy, including the Panama Canal.

Although Lodge believed in spreading American cultural and economic influence, he did not approve of the reverse: masses of immigrants spreading their influence to the United States, particularly from Eastern and Southern Europe. He was a key figure in the advocacy of immigration restriction by requiring that immigrants be able to read five lines from the U.S. Constitution. Lodge’s proposal passed the House and Senate in 1895, but President Cleveland vetoed it. Lodge thought in political, cultural, and racial terms on the subject. He thought of Eastern and Southern Europeans as lesser but also had realistic political fears: immigrants from these areas tended to vote Democrat. Lodge’s political concern has undoubtedly been proven correct given the state’s current political makeup, fueled by the influx of Catholic working-class immigrants and the out-migration of WASPs. Lodge’s proposal again was vetoed by President Taft in 1913, but four years later Congress succeeded in overriding President Wilson’s veto of the Immigration Act of 1917, which included the literacy test as well as an “Asiatic Barred Zone” and basically prohibited a laundry list of anyone from immigrating who was at risk of being a political or social inconvenience to the United States.  He also voted for the Immigration Act of 1924, which slowed immigration to a crawl as it aimed to maintain the levels of race and ethnicity based on the census of 1890, before the major wave of immigration from Southern and Eastern Europe occurred. However, Lodge also opposed more extreme propositions on immigration, such as total bans based on race.

If Lodge’s stances on immigration seem highly uncharitable today, his support for voting rights on race do not. In 1890, Lodge sponsored a bill with Senator George Frisbie Hoar that would have enforced voting rights in the South as well as tackled corruption nationwide. Although it passed on a partisan vote in the House, the measure was filibustered to death in the Senate and used as an issue against the Republicans in the 1890 midterms. His enthusiasm, as well as the Republican Party’s, for passing civil rights legislation waned as a result. Lodge didn’t think highly of social reform movements in general in the 1910s and voted against the constitutional amendments providing for the direct election of senators, Prohibition, and women’s suffrage. For the latter, the state of Massachusetts’ male voters had overwhelmingly rejected suffrage in 1915. The latter stance also came at a political cost as public opinion turned increasingly favorable to suffrage: in 1918, his even more conservative colleague and anti-suffragist John W. Weeks lost reelection to suffragist Democrat David I. Walsh, with suffrage being a central issue of the campaign. This development was tremendously significant as Massachusetts hadn’t had a Democratic senator since 1851, and Walsh was only the second from the state. Lodge himself almost lost his final reelection bid in 1922, coming within a point of defeat. Although Lodge supported the Dyer Anti-Lynching Bill, he didn’t commit much energy to it and assigned freshman Senator Samuel Shortridge (R-Calif.) to shepherd the bill. Shortridge proved no match for Senators Oscar Underwood (D-Ala.), William Borah (R-Idaho), and Pat Harrison (D-Miss.), whose will to defeat the bill was far greater than the Republican will to pass it.

Henry Cabot Lodge’s stances on most issues was conservative, including his backing of the gold standard, tariffs, and opposition to strong regulations on business. He also supported the tax cuts of the Harding Administration. There were a few reforms he endorsed, such as an abolition of child labor, but he mostly could be counted as a “standpatter”. His influence extended to the judiciary as well, and he recommended Oliver Wendell Holmes to President Theodore Roosevelt, who appointed him Associate Justice of the Supreme Court. Although Holmes disappointed Roosevelt in voting against the Administration’s position on an anti-trust case, he would become the most recognized and celebrated justice who never held the post of chief justice for his jurisprudence.

This part of his career is what Lodge is most famous for. In 1912, the conservative Lodge backed Taft over progressive Theodore Roosevelt, but the two remained personal friends. However, there was no friendship between Lodge and the victor, Woodrow Wilson. From the start of the Wilson Administration he stood opposed to his policies. Wilson and Lodge had a surprising amount in common: both held doctorates, they were intellectual equals, both held high opinions of themselves, and both were stubborn. However, on politics they agreed on few things, and Lodge more than anyone else was able to irritate the president. Lodge despised Wilson and thought him to be indecisive, weak, and morally relativistic on foreign policy. He thought Germany was the bad actor in Europe and that Britain, France, and Russia were the good actors and that Wilson should act accordingly. Wilson thought no better of Lodge, believing him to be a man who would do anything for partisan advantage and regarded him and his supporters as having “bungalow minds” (Fleming). The relations between Wilson and Lodge were so awful that neither would be in the same room.

These exceptionally poor relations had far-reaching consequences: in 1918, the Republicans won control of both the House and Senate, placing Lodge as chair of the important Foreign Relations Committee as well as leader of the Senate Republicans. Wilson had blundered at the start when he failed to invite Republicans on the Foreign Relations Committee to Paris with him. Wilson’s League of Nations struck Lodge as being too compromising of American sovereignty, especially the section requiring the United States to come to the defense of member nations. Lodge stated, “The United States is the world’s best hope, but…if you tangle her in the intrigues of Europe, you will destroy her powerful good, and endanger her very existence… Beware how you trifle with your marvelous inheritance — this great land of ordered liberty. For if we stumble and fall, freedom and civilization everywhere will go down in ruin” (PBS). On the Versailles Treaty, several factions sprung up: the internationalists, who supported a treaty with no reservations; reservationists, who backed a treaty with reservations; and irreconcilables, who under no circumstances would back the treaty. Wilson suffered a debilitating stroke during his tour of the United States to promote the treaty and as a consequence was rendered partially paralyzed and mentally impacted by a severe stroke. He refused to give any ground to Lodge despite lacking enough support for a treaty with no reservations and instructed his supporters to vote against a treaty with reservations. Lodge didn’t have enough support for his position either thanks to the votes of the irreconcilables moving against him as well. In the end, the treaty was defeated to the tremendous dismay of Wilson, who left office regarding himself as a failure. Lodge’s success on defeating the treaty gained him further prominence and during the Harding Administration he participated in the Washington Naval Conference, the first arms control conference in history.

Lodge died of a stroke on November 9, 1924, nine months after his arch-rival, Woodrow Wilson. Lodge’s grandson, Lodge Jr., also got into politics and forged a different path, becoming one of the Republican Party’s leading advocates of internationalism, centrism, and immigration liberalization. However, he found no inconsistency in supporting the United Nations with his grandfather’s views since the organization satisfied the restrictions he had advocated for the League of Nations. Despite Wilson (1944) vilifying Lodge on his role in defeating the Versailles Treaty, Lodge’s position on the extent of American commitment to foreign affairs won out the following year and has won out since. Despite his substantial impact on American politics, his lack of revival likely stems from lack of contemporary name recognition, his overall conservatism, and past stances on certain issues that are quite far from mainstream today.