Anyone familiar with American politics knows the name of the 40th President of the United States Ronald Reagan. However, he was not the first Reagan to make his mark in American politics. That would be John H. Reagan (1818-1905) of Texas, who was a Democrat. 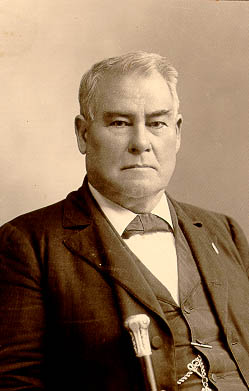 In 1846, Texas was admitted into the Union, and with this admittance, John H. Reagan’s career began. He rose up in Texas politics over the next ten years and in 1856 he was elected to the House, where he was a staunch defender of slavery, believing that slave ownership was an extension of property rights. Reagan warned that if abolition were to occur, it would lead to the extermination of much of the freed slave population (he thought it would be a defensive action on the part of whites) with the remainder living in “degradation, suffering, and want” (The Congressional Globe). However, he was against secession, that is, until John Brown’s raid on Harper’s Ferry and undoubtedly after Abraham Lincoln was elected president. On January 15, 1861, Reagan resigned in anticipation for Texas seceding and ultimately voted for secession, with Texas formally seceding on February 2nd.  That month he was appointed Postmaster General of the Confederate States of America. In this capacity he managed to grab the U.S. Post Office as well as most of the heads of the U.S. Post Office bureaus right under the nose of the U.S. government. They had defected and copied their materials in response to his invitation to work for him. In six weeks of taking office, Confederate mail service was up and running. Throughout the Civil War, his department would be by far the most effective in the Confederate cabinet, adopting policies including raising postal rates, employing a small and efficient staff, and convincing railroad magnates to reduce their rates for mail by half.

On May 9, 1865, Reagan was captured by the U.S. Army and spent 22 weeks in solitary confinement. While in custody, he learned of the angry and bitter attitudes of the North to the South through newspapers and in August of that year wrote an open letter to the people of Texas called the “Fort Warren Letter”, urging them to recognize the authority of the United States, to abolish slavery, and to grant former slaves suffrage if the federal government demanded it to avoid military rule. Bear in mind, Reagan opposed suffrage for blacks, but he thought it better that it be done by the state of Texas than the federal government if it couldn’t be avoided. On his release to Texas in December 1865, Reagan was shunned for the letter, but as Texas underwent Reconstruction the people came to realize he had been prescient. They forgave him and he was able to relaunch his political career. Reagan was elected to Congress in 1874, and in 1887 he was elected to the Senate. During this time, he was the foremost advocate of railroad regulation and his efforts resulted in the creation of the Interstate Commerce Commission. He resigned in 1891 to accept the role of chair of the Railroad Commission of Texas, the body that regulated railroads in the state, serving until 1903. In 1897, Reagan played a role in establishing the Texas State Historical Association and in 1903 he wrote memoirs on his time in politics titled Memoirs, with Special Reference to Secession and the Civil War, in which he characterized both abolitionists and secessionists as radicals who took liberties with the Constitution.

Reagan died of pneumonia in 1905, leaving behind a legacy as the most successful cabinet leader in the Confederate States of America and in the establishment of railroad regulation.