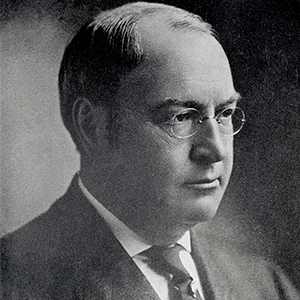 Last time I covered John Sherman, and this time I have another, but unrelated, Sherman to cover: James Schoolcraft Sherman (1855-1912), the 27th Vice President of the United States.

Sherman first got his start in Congress at the age of 31, when he was elected to Congress in 1886 from New York. He quickly proved to be one of the ablest legislators in the Republican Party and this got the attention of Republican House leader Thomas Brackett Reed, himself one of the most effective party leaders. In 1890, he supported higher tariffs under the McKinley Tariff Act, a law which proved so unpopular that both he and McKinley lost reelection that year. However, Sherman regained his seat in the 1892 election. He proved an outstanding parliamentarian and was sought for his abilities by three successive Speakers: Thomas Brackett Reed, David B. Henderson, and Joe Cannon. Sherman also proved one of the most masterful people to preside over the Committee of the Whole, which Senator Henry Cabot Lodge regarded as “a severe test of a man’s qualities, both moral and mental. He must have strength of character as well as ability, quickness in decision must go hand in hand with knowledge, and firmness must always be accompanied by good temper” (U.S. Senate).

A staunch political conservative, he actively participated in the debates over currency, favoring the gold standard as opposed to free coinage of silver, the latter which was inflationary. Sherman was a bit of a Reaganesque figure in his time as well as he possessed a jovial personality, for which he was nicknamed “Sunny Jim”. During the Roosevelt Administration, Sherman sided with the conservatives led by Speaker Joe Cannon, which limited the ability of President Roosevelt to effectively pursue a more progressive domestic agenda. Despite his influence, he never held the chairmanship of a major committee, preferring to allow others to have those positions. During the debate on the Food and Drug Act, Sherman proposed a weaker substitute that would only require a canner to be accurate in labeling the weight and measure of a product if they opted to label a weight and measure. He was consistently trusted to hold the gavel in the absence of the Speaker and performed his duties as expected.

In 1908, the conservative wing of the Republican Party wanted to be sure that one of their own was in the White House to keep in check Roosevelt’s successor William Howard Taft and pushed strongly for Sherman on the ticket. Initially, the two men had significant policy disagreements, and Sherman refused to serve as a liaison between the White House and Congress, stating “You will have to act on your own account. I am to be Vice President and acting as a messenger boy is not part of the duties as Vice President” (U.S. Senate). However, Taft moved to the right throughout his presidency and they grew closer. Taft himself stated that Sherman achieved much in Washington due to his “charm of speech and manner, and his spirit of conciliation and compromise” but also stated “it would be unjust to Mr. Sherman to suggest that his sunny disposition and his anxiety to make everybody within the reach of his influence happy, was any indication of a lack of strength of character, of firmness of purpose, and of clearness of decision as to what he thought was right in politics” (U.S. Senate). An example of his amiable nature was when the Democratic VP candidate in 1908, John Worth Kern, was elected to the Senate in 1911 and within minutes of his swearing in Sherman invited him to take the gavel and proceed over the Senate despite having never served in the chamber before. However, he also was willing to bring down the hammer when he felt it necessary and urged Taft to penalize progressive Republicans rebelling against the Payne-Aldrich Tariff through denying postmaster appointments to progressives in the party.

Unfortunately, Sherman had suffered from what at the time was called Bright’s Disease (a kidney ailment) since 1904, the same affliction that killed President Chester Arthur. The illness progressively advanced and by 1912 he was too ill to campaign. Defying his doctor’s advisement, however, he delivered an acceptance speech on August 24th at the Republican National Convention, and his health began to collapse two days later. On October 30th, six days before the election, he succumbed to his illness at the age of 57.

Personal aside: I think quite frankly we need more people in our fractured, tumultuous politics like “Sunny Jim” Sherman. Although I see a lot of promise in Rep. Dan Crenshaw of Texas for this role, we need many more figures like him and less like Steve King or any of the four members of “the squad”. I also wish President Trump would be a “happy warrior” type as opposed to being largely a combative one, although I think he gives as good as he gets nowadays.