Most Speakers of the House are selected after many years of service. The longest-serving Speaker in history, Sam Rayburn, had been in office for 27 years before being elected to the post, and Joseph G. Cannon, possibly the most powerful Speaker to have served, had served for 28 years before Republicans finally decided to elect him. On average, Speakers since 1861 have served 18 years in the House before being elected to the position. This made me curious about a seemingly insignificant Speaker, Joseph Warren Keifer (1836-1932) of Ohio, who was elected after serving only four years! Some factors suggest his rise: his distinguished war record as a brigadier general in the Union Army as well as his identification with the “Stalwart” faction of the Republican Party, which supported Ulysses S. Grant (and then Garfield for including Stalwart Chester Arthur as VP) and favored machine politics rather than civil service reform, supported by the “Half-Breed” faction. It also didn’t hurt that he was from Ohio, the same state as winner of the 1880 presidential election, James A. Garfield. However, there was another possible under-the-surface reason which I shall get to a little later. 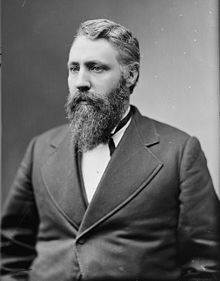 Unfortunately for Keifer, his time as leader proved to be quite disruptive. In 1881, the nation would suffer its second presidential assassination, with James Garfield falling victim to a deranged and delusional office seeker names Charles J. Guiteau. He thought he was owed a consulship because he delivered a speech twice in campaigning for Garfield, copies of which had been distributed at the Republican National Convention. The Stalwart Keifer in the meantime had been baldly partisan in his committee assignments and lacked skill in building support for the issues he sought to push, most notable being his failure to curb the House filibuster. This feat would eventually be achieved by the much more capable Republican Thomas Brackett Reed, but his story is for another time. Keifer also ran into trouble when he got into conflict with the press.

The issue with the press started when one night at the end of a session the press section of the House gallery was mostly empty and he permitted House family members to sit in the section, which the press corps, led by its dean Republican Henry Boynton of the Cincinnati Commercial Gazette, interpreted as retaliation for negative coverage of his rise as Speaker. Some papers had reported that Keifer’s selection was due to a bargain that in exchange for him being Speaker, he must kowtow to whatever the factions that elected him wanted. This could explain his handling of committee assignments. Keifer became pitted in a public battle with Boynton, who had previously made an agreement with Keifer’s predecessor, Democratic Speaker Samuel J. Randall, to reserve that portion of the gallery for the press. Keifer responded to Boynton’s allegations of retaliation with hostility, accusing him of trying to illegally influence legislation and writing in a public letter to him that “You have so often been shown to be a liar and defamer of character that it has become unnecessary to deny anything you say” (Stafford, 2009). His accusations were investigated by Congress but were unsubstantiated. Boynton responded in letters released to the public in 1884 stating, “it is unnecessary to respond to your puerile charges touching my general course as a correspondent, except to repeat that they, also, are without substantial foundation and evidently are invented to distract attention from grave charges of official misconduct brought against yourself” (Stafford, 2009).

Keifer’s leadership of the Republican House was ended by the Republican Party’s loss of the House in the 1882 midterms, a repudiation of Stalwart Republicanism. Rank and file Republicans also didn’t support him for continued leadership thanks to his troubles and the fact that he practiced nepotism, giving “choice jobs to close relatives…all at handsome salaries” (Congressional Research Service). They turned instead to Thomas Brackett Reed of Maine. The following election year, Keifer lost renomination, which was undoubtedly assisted by the publishing of Boynton’s letters. As a leader, he was overall a disaster: he lacked political leadership skills and was brought down by his own conflicts with the press. The Republican Party dispute over civil service reform was resolved when almost every Republican officeholder voted for the Pendleton Act, which was passed just before the end of the 47th Congress, making the civil service merit-based. The Republican Party chose to unify on this issue because of the dismal election results in 1882 and to keep their own people in office. However, this was not the end of Keifer’s political career!

In 1898, the Spanish-American War was on and President William McKinley placed Keifer in command of the 7th Army Corps, which marched into Havana after the Spanish forces pulled out. In 1900, he wrote Slavery and Four Years of War, his account of the Civil War and the history of slavery in the United States. In 1904, he was again elected to Congress, but didn’t regain the level of influence he had before. Conservative in his worldview, he supported the agenda of Speaker Joseph G. Cannon and voted against the Norris Resolution stripping him of his ability to chair the Rules Committee in 1910. That year, he lost reelection and the House was won by the Democrats. Keifer subsequently retired from politics.

Keifer differed from modern speakers in the following sense: most of them don’t stay after their time as speaker or party leader is done. The last Speaker of the House who lost leadership of the party and continued to stick around in Congress was Republican Joseph W. Martin Jr. of Massachusetts, and he was defeated for renomination 53 years ago. He also differed in that he was only picked after four years; not since 1891 has a Speaker been elected who didn’t serve at least 12 years in Congress beforehand. Keifer was an unusual example of someone who could rise so quickly in politics only to fall by the weight of his own political inadequacies and public relations failings…and then make a political comeback!

The Role of the House Minority Leader: An Overview. (2019, January 25). Congressional Research Service.