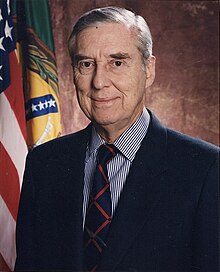 In 1988, Ronald Reagan was in his last year of office and his Vice President, George Bush, was running as his successor. For his VP, he selected Senator Dan Quayle of Indiana, appeasing social conservatives. At the Vice-Presidential debate, Quayle responded to a question about what he would do should he become president, and in the process stated that his experience (four years in the House, eight in the Senate) was comparable to John F. Kennedy’s (six years in the House, eight in the Senate). However, Senator Lloyd Bentsen, the Democratic VP candidate, pounced: “Senator, I served with Jack Kennedy. I knew Jack Kennedy. Jack Kennedy was a friend of mine. Senator, you’re no Jack Kennedy” (Bierman, 2016). This moment was easily the high mark of the ill-fated Dukakis-Bentsen ticket, which lost by eight points and won a mere ten states. Many Americans came away thinking that Bentsen ought to have been the Democratic nominee. This race constituted numerous lasts in politics. This was the last election in which Democrats lost in California, Connecticut, Delaware, Illinois, Maine, Maryland, New Jersey, and Vermont. This was also the last election in which either of the major tickets had a legitimate moderate.

Lloyd Bentsen (1921-2006) began his career in federal politics young, winning Texas’s 15th Congressional District in 1948, a seat that had once been held by Speaker of the House and then FDR’s first Vice President John Nance “Cactus Jack” Garner. He developed a reputation as a political moderate and notably was one of only two Texans to vote for a federal anti-poll tax bill in 1949. This put him in a good position to be a representative of “New South” Democrats in the future. However, Bentsen voted with his Southern colleagues on other civil rights measures during his House tenure. He also developed a friendship with Speaker of the House Sam Rayburn, who saw leadership potential in the young man. However, in 1954 Bentsen opted not to run for reelection to concentrate his efforts on building up a career in the private sector.

In 1970, Bentsen decided the time was right to make a political comeback and his target was Senator Ralph Yarborough. Yarborough was a staunch liberal who supported civil rights and had come to oppose the Vietnam War and was thus vulnerable. Bentsen hammered away at the incumbent’s opposition to the Vietnam War, his liberal positions, and his campaign ads connected him with rioting at the 1968 Democratic National Convention. Yarborough in turn accused Bentsen of being a “war profiteer” for his investments in the defense industry, but this proved ineffective and he lost renomination in what was widely regarded as an upset. Republican Congressman George Bush was hoping to run against Yarborough, but Bentsen proved too difficult to beat and prevailed by seven points. Liberals in the state were not pleased about him, but he proved in his Senate career to hold both liberal and conservative positions. For instance, Bentsen regularly voted with organized labor but was also one of the Senate’s leading supporters of the deregulation of natural gas prices. He also opposed abortion restrictions while supporting the death penalty. A Republican colleague stated, “Whatever his philos­ophy, it’s so well disguised that no one reacts automatically by thinking, ‘If it’s Bentsen, it’s gotta be good—or bad.’ The result is that he gets a hearing” (Texas Monthly). His lifetime score on Mike’s Conservative Index is a 43%*, placing him in the moderate range of American politicians.

Bentsen was highly ambitious and attempted a presidential run in 1976. In 1984, he was considered for VP, but lost out to Geraldine Ferraro. In 1988, Michael Dukakis chose him in the hopes that he would balance out the ticket and win the state of Texas. The latter proved to be wishful thinking, as Dukakis became known nationwide for his staunch liberalism and didn’t appear presidential during the campaign. From 1987 to 1993, Bentsen chaired the Senate Finance Committee and in this position, he was an advocate for Individual Retirement Accounts (IRA). Perhaps his foremost accomplishment as a senator was his pension protection legislation, a highly sought-after goal for union workers. At first, Bentsen thought of running for president in 1992, but he was dissuaded by the popularity of Bush during the Iraq War, the authorization for which he had voted against. However, his chairmanship combined with his good showing in the 1988 election put him in a good position for a federal appointment and in 1993, his time for the Executive Branch finally came when President Bill Clinton nominated him Secretary of the Treasury. Bentsen was instrumental in convincing Republican senators to support NAFTA and proved a strong advocate for the Clinton Administration’s budget bill, which passed by only one vote in both Houses of the Democratic Congress and contributed to a reduction of $500 billion in the deficit. He retired on December 22, 1994.

Lloyd Bentsen was a last in multiple ways: the last political moderate on a presidential ticket and the last Democrat the voters of Texas have elected to the Senate as of 2019. Were he still alive and serving today, Bentsen would certainly be one of the Democratic Party’s most conservative officeholders and had the Democrats nominated him in 1988, they would have stood a far better chance at defeating Bush, a man Bentsen had bested before.

*- Mike’s Conservative Index is a work in progress and I will write more on it in the future. I have so far used a selection of ideologically revealing votes to determine conservative scores for legislators from the 51st Congress (1889-91) to the 104th Congress (1995-97). I consider a lifetime score between 36% and 64% to be moderate.