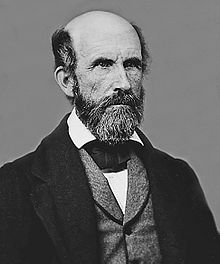 At the onset of the Civil War, numerous members of the House and Senate were expelled for their allegiance to the Confederacy, including Missouri’s two senators, Waldo Johnson and Trusten Polk. Additionally, not all was necessarily well with the border states that stayed: many Missourians identified with and fought for the Confederacy and parts of Maryland were hotbeds of Confederate sympathy, especially Baltimore and the southern part of the state. In 1862, Maryland’s 5th Congressional district, located in the southern portion of the state that had a lot of slave owners, elected Benjamin Gwinn Harris (1805-1895).

Although he initially opposed secession he turned in favor of it and advocated the constitutionality of both slavery and secession. Harris, who was a slave owner himself, voted against the abolition of slavery and he openly prayed for a Confederate victory on the floor of Congress, which resulted in his censure. The following year, he was prosecuted by a military tribunal on the charge of harboring two paroled Confederate soldiers and was sentenced to three years in prison, but the sentence was overturned by President Johnson. After the Civil War, he opposed his state’s new constitution since it didn’t compensate Maryland’s former slave owners for emancipation, granted suffrage to blacks, and permitted non-whites to testify in court. The notion that non-whites could testify in court against whites struck Harris as “antithetical to ‘Biblical law’” (Kastenberg, 158). Part of the reason he opted against running for reelection in 1866 was to focus his efforts on disenfranchising black voters, and he succeeded in preventing Maryland from voting to ratify the 14th Amendment (the state would not do so until 1959). In 1868, Harris considered a presidential run but his time had passed, and he staunchly refused to support any presidential candidate who had been an abolitionist. In 1885, he was overjoyed that Democrat Grover Cleveland won the presidential election and attended his inauguration. He would continue to stand for policies that were in place before the Civil War, and in 1892, at the age of 86, he forwarded a petition to Vice President Levi P. Morton to compensate former slave owners in Maryland. The petition went to the Senate, but senators were uninterested. Harris would die in 1895 with few of his political aims achieved.