Today’s entries will be about Florida and Texas, the states that easily underwent the most cultural change in the last 100 years. 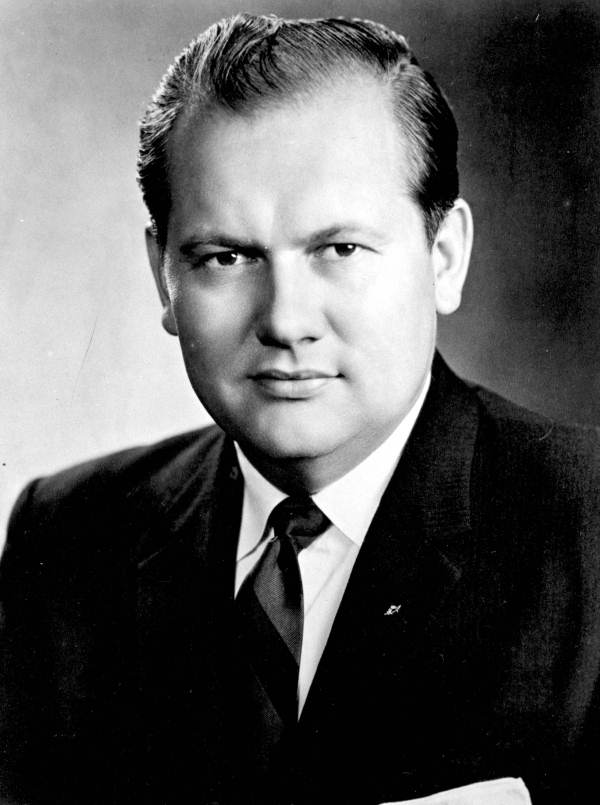 Congressman Bill Cramer (R-Fla.), 1955-71, the primary actor in the rebuilding of the Florida GOP.

In 1928, Herbert Hoover won Florida, a tremendous accomplishment given that the state had not elected a Republican since 1876 and had not even sent a Republican to Congress since 1882. This had been due to Jim Crow laws which resulted in most blacks not being able to vote. Hoover’s victory can be attributed to Democrat Al Smith’s opposition to Prohibition and his Catholicism. FDR, however, managed to win all counties in the state each time he ran. Even during the Roosevelt Administration change was occurring in the South: in 1937 the state abolished the poll tax at the urging of Senator Claude Pepper, which resulted in an increase in voter turnout. What pushed Republicanism further in the state was post-war suburbanization, in which many white Republicans from the North and Midwest moved in. In 1948, Harry S. Truman won the state but by a plurality, with the combined vote of Republican Dewey and Dixiecrat Thurmond, with Dewey winning 11 counties. In 1952, the state swung Republican, with Dwight Eisenhower winning by 10 points. In 1954, the voters of the 1st district based in St. Petersburg elected Republican Bill Cramer, a charismatic and energetic campaigner who was instrumental in the revival of the state’s GOP. The Republicans won the state in the next two presidential elections but narrowly lost in 1964. You might be noticing a pattern by now: the states in which Republicans started to win in the 1950s but lost in the Goldwater race were ones in which the trend towards the GOP was based in suburbanization and the migration of Republican voters far more than opposition to civil rights laws. Florida’s rural panhandle region, on the other hand, was more Deep South in its behavior and it was not won by Eisenhower or Nixon in 1960 but won by Goldwater in 1964 and Wallace in 1968. The region didn’t start to become solidly Republican until the 1980s. In 1966, Claude Kirk was the first Republican to be elected governor since Reconstruction. 1968 was an excellent year for the GOP in the state overall as Nixon won it and Congressman Edward Gurney was the first Republican elected senator since Reconstruction. These events were triggered by the combination of dissatisfaction with the Johnson Administration on the Great Society, urban riots, civil rights, and the Vietnam War. International events would also start to benefit the Republican Party in this state.

On January 1, 1959, corrupt Cuban dictator Fulgencio Batista was ousted in a revolt that resulted in a Communist dictatorship. Many who had supported ousting Batista were unaware of the ideological intent of Fidel Castro and Che Guevara. Rather, they were interested in reforming a country that had become a haven for the Mafia and had many industries run by U.S. firms and in ousting a dictator who had killed anywhere from hundreds to 20,000 Cubans. However, it was out of the frying pan and into the fire, and ultimately 1.2 million Cubans left for the United States between 1959 and 1993. These Cubans hated the Castro regime and wanted to do whatever they could to politically oppose it, which included maintaining a trade embargo against Cuba. They saw the Republican Party as the best political vehicle in the U.S. to express their anti-communism and to this day they remain the only Latino group that is predominately Republican. In 2004, Florida Republican Mel Martinez was the first Cuban-American elected to the Senate, and he was succeeded in office by fellow Cuban-American Republican Marco Rubio.

Despite these favorable developments for the GOP on a national scale, much work still had to be done on the state level as interparty fighting plagued their effectiveness, as the Kirk faction of the party feuded with the Cramer faction, which contributed to latter’s defeat in the 1970 Senate election. By 1976, Democrats had both Senate seats again and the state voted for Carter by five points. Florida was now what it is known as today: a swing state. In fact, since 1928, Florida hasn’t voted for the winner only twice, when the state voted for Nixon in 1960 and Bush in 1992. However, trends have been shifting slightly to the GOP. In 1981, only four of fifteen House seats were Republican and the GOP wasn’t able to get a majority of the seats until the 1988 election, which also gained Florida their first two-term Republican Senator, Connie Mack III. On the state level, since Reconstruction the GOP didn’t gain a majority in the Senate until 1995 and the House until 1997. As of 2019, 14 of 27 House seats and both Senate seats are occupied by Republicans. They are even stronger on the state level, as the party as held the governorship for 20 straight years and currently holds 27 of 40 Senate seats and 73 of 120 House seats. Although the GOP currently has a minor advantage, Florida is still a swing state. 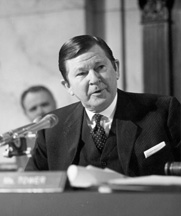 Texas has a long history as a Democratic state, as it voted that way since its admission into the union and didn’t once vote Republican for president…until 1928. The reasons for Hoover’s win in Texas were the same as in the other Southern states he won. Despite its 1928 vote, the state maintained a solid connection to the Democrats, whether they be progressive or conservative: from 1875 to 1960, only five Republicans were elected to the House and zero to the Senate. However, the politics that arose from the New Deal began the state’s shift and even in early 1940s it was becoming clear that the state was growing more and more conservative. The chair of the House Un-American Activities Committee, Texas Congressman Martin Dies Jr., was consistently alleging the presence of communists in the federal government and had become a foe of the Roosevelt Administration. In 1941, Governor Pappy O’Daniel won a special election as senator, and he was up until that point by far the most rightist person to ever serve from the state. He and Dies were part of the political faction of Democrats called the “Texas Regulars” who tried to deny FDR a fourth term. In 1948, the state voted to elect Harry S. Truman president with 66% of the vote, his strongest showing in the country. However, the people voted for him partly because he stated that he wouldn’t try to exert federal control over the state’s offshore oil deposits.

After Truman won the 1948 election, he turned around and had his Attorney General, Texan Tom Clark, sue the state over its title on its offshore oil deposits. This enraged Texas voters and politicians alike, with Governor Allan Shivers and his supporters, known as “Shivercrats”, openly backing Republican Dwight Eisenhower in the 1952 election. Ike had promised to sign legislation to restore the title of offshore oil deposits to the states while Democrat Adlai Stevenson backed federal control. That year, Eisenhower won Texas with 53% of the vote, a remarkable contrast to Thomas E. Dewey’s 24% in 1948. The following year, all members of the Texas delegation to Congress voted to restore control of the states and Eisenhower kept his promise. He improved on his victory in 1956 by two points, but the GOP still had a lot of work to do in the state: its only representative was Bruce Alger of Dallas, a doctrinaire, inflexible conservative who was despised by Speaker of the House Sam Rayburn and the rest of the Texas delegation. However, the Texas GOP would find its champion in a young conservative intellectual, John G. Tower.

In 1960, Tower undertook the unenviable task of challenging Senator Lyndon B. Johnson for his seat. He campaigned hard and although he lost the election as expected, he managed to get 41% of the vote. Since Johnson was elected Vice President, Tower had a second chance at a run, and the following year he won the seat by one point due to infighting between the liberal and conservative wings of the Democratic Party, becoming the first Republican Senator elected from the state since Reconstruction. Liberal Democrats chose to vote for Tower instead of aging conservative Democrat William A. Blakley as they refused to vote for a conservative representing their party. This dynamic got Tower reelected in 1966 but he won twice more without it. The state of Texas was notably the only Southern state to vote for Hubert Humphrey in 1968 and this was thanks to Lyndon B. Johnson’s continued influence. Nixon performed well in the state’s panhandle while Wallace won East Texas, which was Deep South in character and would not start voting Republican until the 1980s. Texas was more of a peripheral South state in its behavior as it didn’t bolt for Thurmond in 1948 or Wallace in 1968, so its changes, like in the states of Virginia and Florida, were best explained by suburbanization as well as the popularization of air conditioning, which enabled more people from the North and Midwest to move there. One the most notable transplants to the state was George H.W. Bush, who had been born and raised in Massachusetts. In 1976, the state voted one last time for a Democrat in Jimmy Carter. Notably, he carried 74 counties that never again voted Democrat. In 1980, Ronald Reagan won the state by 14 points.

On the state level, Republicans were slow to dominance: they didn’t win their first gubernatorial race since Reconstruction until Bill Clements’ 1978 victory, didn’t hold both Senate seats until 1993, didn’t win a majority in the Texas State Senate until 1996, and didn’t win a majority in the Texas House of Representatives until the 2002 midterms. At the time, the Texas delegation to Congress was 17-15 Democrat despite 55% of the state’s voters having voted for Republican members of Congress. Governor Rick Perry and U.S. House Majority Leader Tom DeLay aimed to change that in 2003, when they urged the Texas State House to pass legislation to redraw districts, which resulted in a highly favorable map for the Republicans. The 2004 election flipped the Texas House delegation from 17-15 Democrat to 21-11 Republican. Although the Democrats challenged the redistricting in the Supreme Court, they upheld all but the newly configured 23rd district, which was found to be in violation of the Voting Rights Act. The state remains Republican dominated and they have held the governorship since 1995 but there have been some signs that its Republican affiliation is declining: notably the GOP lost two congressional seats that had long been Republican (including George Bush’s Houston suburbs district) and came within five points of defeat in six districts. Additionally, Senator Ted Cruz came within three points of losing reelection. There is also the factor of the increasing Latino vote, which although in Texas it is more conservative than in other places save for Florida is contributing to Democratic gains in the region. Possibly counterbalancing this trend are conservative voters from states such as California moving in to capitalize on Texas’s prosperity. Whether this midterm factors significantly in longer trends for the state has yet to be seen.