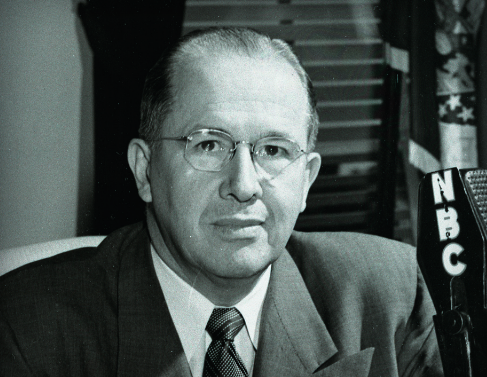 When we think of the Eisenhower era, we think of a time of conformity, prosperity, but also of moderation. What you probably didn’t know is that Eisenhower had a member of his cabinet who was a religious leader. This would be Ezra Taft Benson (1899-1994), his Secretary of Agriculture. Benson was in the Quorum of the Twelve Apostles of the Church of Latter-Day Saints, a governing body second only to the office of the president. He was eminently qualified for this position as his master’s degree was in agricultural economics and he had an extensive career in the field. As Secretary of Agriculture, Benson was possibly the most conservative member of the cabinet and pursued free market policies. It was Benson’s aim to end price supports and farm subsidies, instead supporting flexible supports. He regarded strong supports and farm subsidies as a manifestation of “creeping socialism”. Benson was staunchly anti-communist and opposed Nikita Khrushchev’s visit to the United States in 1959. He stated his views on politics thusly, “I am for freedom and against slavery. I am for social progress and against socialism. I am for dynamic economy and against waste. I am for the private competitive market and against unnecessary government intervention. I am for national security and against appeasement and capitulation to an obvious enemy” (Godfrey). Despite being a staunch conservative in a moderate administration, Benson held his post for the entire presidency and Eisenhower concurred in his farm policies. He subsequently became supportive of the John Birch Society and in 1966 published a pamphlet that reflected the organization’s views on civil rights titled, “Civil Rights, Tool of Communist Deception”. Benson called the JBS “The most effective non-church organization in our fight against creeping socialism and godless Communism” (Quinn, 5). Although he was never a member (probably because of his position in the Mormon church), his wife and sons joined, one of them becoming the organization’s coordinator in Utah. His support for the John Birch Society was a change from his anti-McCarthy views in 1954, and he later came to regard Joseph McCarthy as having performed a service for the United States.

Benson’s affiliation with the organization and his power in the church led fellow members to criticize him for using his post to spread these ideas, and in March 1963 he was ordered to publish a statement that clarified that his support was “my personal opinion only” and that the LDS president opposed the use of the Church for increasing membership in anti-communist organizations (Quinn, 19). Benson’s support for the John Birch Society and its leader, Robert Welch, also got him into conflict with former President Eisenhower, as Welch in his book The Politician accused Ike of consciously serving the communist conspiracy. To reduce his influence in America, LDS President David O. McKay sent him on a mission to Europe in 1963. In 1967, Benson permitted the use of one of his talks, Trade and Treason, as a foreword to an overtly racist book, “Black Hammer”, which had an illustration of a decapitated head of a black man on its cover. In 1968, Benson discussed being Vice President on George Wallace’s Independent Party ticket, but LDS Church President David O. McKay nixed the idea. While speaking at a Church General Conference in 1972, he recommended the book None Dare Call it Conspiracy, a conspiracy theory book by Bircher author Gary Allen. In 1973, he became President of the Quorum of the Twelve Apostles and in 1985, became President of the Church of Latter Day Saints. By this point, he had become less outspoken politically but increased the distribution of the Book of Mormon. Benson also contributed $10 million to President Ronald Reagan for the purposes of feeding the hungry people of the world.  In 1989, President George H.W. Bush awarded him the Presidential Citizens Medal. In his last years, Benson suffered from various health problems including heart failure, strokes, and dementia. By the end, he could barely communicate and his duties were basically taken over by counselors Gordon B. Hinckley and Thomas S. Monson. Benson died on May 30, 1994.

A link to the cover of “Black Hammer”, the racist book for which Benson authorized one of his talks as its foreword: