Among the over twenty people who are running for the Democratic nomination for 2020 is former Governor John Hickenlooper of Colorado. Although he is the first person with the surname Hickenlooper to have presidential aspirations, he is not the first to have made it big in politics. That distinction goes to his distant cousin, the appropriately-named Iowa Republican Bourke B. Hickenlooper.

Bourke Blakemore Hickenlooper (1896-1971) started on the state level of Iowa politics, serving in its Assembly. In 1936, he ran for Lieutenant Governor and although he was unsuccessful in a bad year for Republicans, “Hick” gained name recognition with the voters. In 1938, he tried again and prevailed. During his time in office, he gained good publicity for saving a woman from drowning which helped him win the 1942 gubernatorial election. Hickenlooper continued to be popular as governor, which resulted in him being the only Republican to defeat a Democratic incumbent in the 1944 Senate elections. 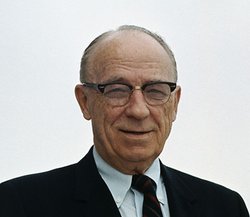 On his entry to the Senate he was placed on the Foreign Relations Committee and was later placed on the Joint Committee on Atomic Energy. On foreign affairs, Hickenlooper cooperated with post-war foreign policy, voting for the Truman Doctrine and the Marshall Plan. However, he took General MacArthur’s side in his feud with President Truman during the Korean War. Senator Hickenlooper staunchly opposed government involvement in market affairs and opposed government production and transmission of electric power. Although Hickenlooper had voted for Atomic Energy Commission chair David Lilienthal in 1947, in 1949 he accused him of incompetence, grilling him on missing uranium from an Illinois AEC laboratory. Although Lilienthal narrowly kept his position, he ultimately resigned six months after, citing the missing uranium. Hickenlooper also advocated for private development of atomic energy, which became a reality with the Atomic Energy Act of 1954, which he sponsored. A staunch anti-communist, he was one of 22 senators to vote against the censure of Senator Joseph McCarthy (R-Wis.) and supported anti-communist amendments to foreign aid bills. Despite being from a farm state, he voted for the Eisenhower Administration’s efforts to enact free market reforms for agriculture.

In 1959, Everett Dirksen (R-Ill.) was elected by Republicans to lead the party in the Senate. Although Hickenlooper voted for him, he would become his leading rival in the party as Chair of the Senate Republican Policy Committee. He disliked his backroom deals, thinking Dirksen compromised too much with Democrats and didn’t give other Republicans enough of a voice. In 1962, as the ranking Republican member of the Foreign Relations Committee, he proposed the Hickenlooper Amendment to the Foreign Assistance Act. If enacted, it would have cut off foreign aid to countries expropriating US property. This was in response to Cuban and Argentinian nationalizations of American oil companies and sugar plantations. President Kennedy opposed the amendment, as he believed it would undermine diplomacy in Latin America, and his Senate allies defeated the proposal. In 1963, after voting to uphold a reservation he voted for the Nuclear Test Ban Treaty, which banned nuclear testing in the atmosphere. However, most of any cooperation Hickenlooper gave to Democratic Administrations was in foreign policy; he voted against the New Frontier and Great Society programs, including the Economic Opportunity Act and Medicare.

In 1946, Hickenlooper, with Republican Styles Bridges of New Hampshire, called for Senator and KKK member Theodore Bilbo (D-Miss.) to be denied a seat for inciting intimidation and violence against blacks trying to vote in that year’s Democratic primary election. Until 1964, Bourke Hickenlooper’s record on civil rights was positive. He supported Truman’s desegregation of the army, supported a voluntary Fair Employment Practices Committee, backed the Eisenhower civil rights bills, and the abolition of the poll tax in federal elections. However, Hickenlooper is most known here for his role in the debate of the Civil Rights Act of 1964.

One of the ways Hickenlooper’s rivalry with Minority Leader Everett Dirksen (R-Ill.) manifested was on the Civil Rights Act of 1964, as he objected to the employment discrimination section. He feared that the government was being granted too much power over individuals and tried to rally other Republicans against the bill. Although through a deal Hickenlooper agreed to vote to break the filibuster on the bill, he was one of six Republican senators to vote against the bill itself. He later voted for the Voting Rights Act of 1965 and opposed the Fair Housing Act of 1968.

Hickenlooper retired in 1969, dying two years later.  In his 24 years in the Senate, he served as a leading conservative voice and a leading anti-communist on the Foreign Relations Committee. Like Colorado’s John Hickenlooper, Bourke was popular with the folks of his home state as governor and went by “Hick”. However, his politics were for the most part entirely different.

4 thoughts on “The First Hickenlooper”