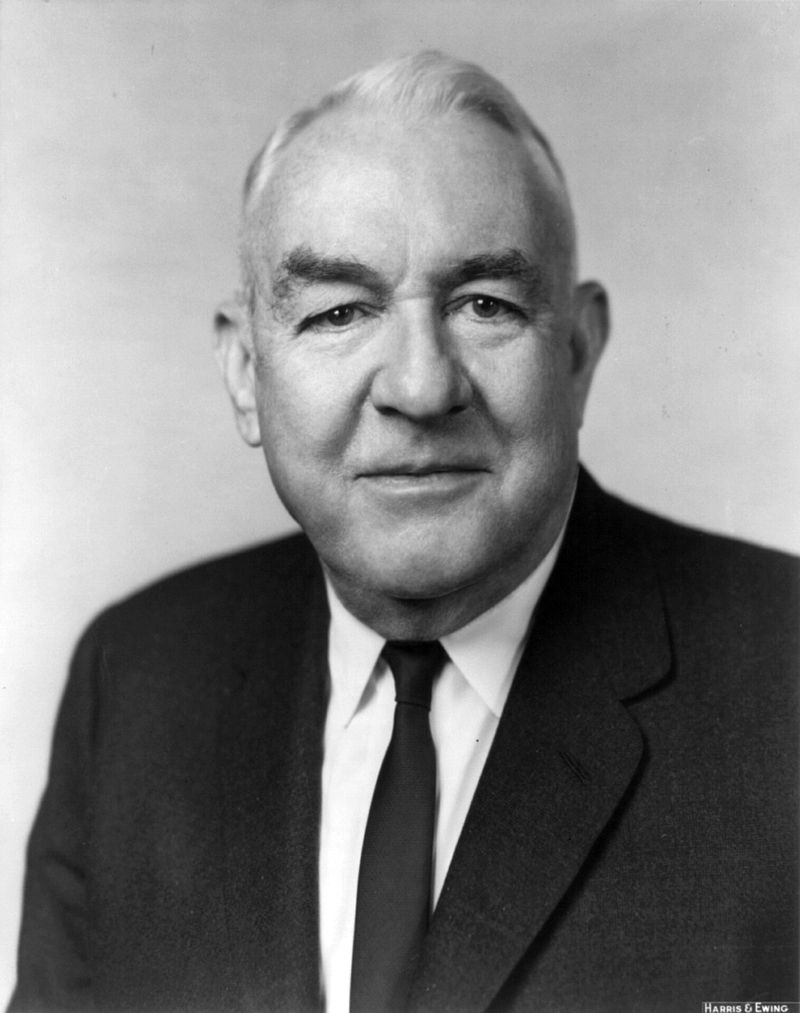 Sam Ervin’s (1896-1985) federal political career began in tragedy: his younger brother, Congressman Joseph W. Ervin, committed suicide on Christmas Day 1945 by inhaling gas from a kitchen stove. The apparent motivation for his demise was the pain he was suffering from a bone infection. He was appointed to finish his brother’s term but wouldn’t return to federal politics for years. In 1954, his career again was boosted by death, this time of Senator Clyde R. Hoey, and Governor William B. Umstead appointed him to fill the vacancy. That year, Ervin served on the committee to determine whether Senator Joseph McCarthy (R-Wis.) should be censured. As did all voting Senate Democrats, Ervin voted to censure McCarthy.

Having been a state judge in North Carolina politics, Ervin was, to say the least, well-versed in the law. He would often quote the Bible, Shakespeare, and cite the Constitution in his arguments. In 1956, he contributed to the drafting of the Southern Manifesto, which called for all legal forms of resistance to Brown vs. Board of Education and desegregation. Ervin effectively served as the Senate’s defense counsel for the Jim Crow system, yet was not known for using racial slurs or race-based arguments. He thus appeared to be defending a racist system using every conceivable legal argument he could make while personally lacking the prejudice. Ervin eventually changed his mind on Brown vs. Board, as he found the decision to affirm that the Constitution was “color blind”, unlike the policies of busing and affirmative action. In 1972, Ervin led the small group of senators who opposed the Equal Rights Amendment. He opposed the rolling back of labor protections specifically for women, the extension of the draft to women, and the potential for unisex bathrooms that would come with the amendment.

On other political issues, Ervin ranged from moderate to conservative and his reception to the Great Society was mixed: he supported the Economic Opportunity Act and federal aid to education but opposed Medicare and rent supplements. However, along with civil rights, he became most notable for his stances on civil liberties. While as a member of the conservative wing of the Democratic Party from the South, one might think that he took a similarly conservative view on civil liberties, but this wasn’t so. He feared that the age of computers would compromise privacy, denounced lie detector tests as “20th century witchcraft”, and opposed “no-knock” warrants (Barnes). In 1966, his influence made the difference in defeating Minority Leader Everett Dirksen’s (R-Ill.) proposed School Prayer Amendment to the Constitution. He had taken a similar stance as a state legislator in the 1920s, when he worked to defeat a bill to ban the teaching of evolution in schools. In 1974, he authored the Privacy Act, which governs the federal government’s use of personally identifiable information.

In 1973, the Senate Watergate Committee was formed to investigate the break-in to the Democratic National Committee, and Ervin was chosen by Majority Leader Mike Mansfield (D-Mont.) to be its chairman. There were three reasons behind this pick. First, he was a Southern conservative and thus difficult for Nixon to publicly dismiss for ideological bias. Second, it was widely (and correctly) thought that Ervin would retire at the end of his term. Third, he had never run for president and had no plans on doing so. He began the hearings with the following statement, “If the many allegations made to this date are true, then the burglars who broke into the headquarters of the Democratic National Committee at the Watergate were in effect breaking into the home of every citizen of the United States. And if these allegations prove to be true, what they were seeking to steal was not the jewels, money or other precious property of American citizens, but something much more valuable – their most precious heritage: the right to vote in a free election” (PBS). On June 25, 1973, the Senate Watergate Committee began hearing the testimony of former White House counsel John Dean, who implicated President Nixon, stating that he had been involved in the coverup of the Watergate burglary and that it was likely that conversations surrounding the subject had been taped. This testimony struck a critical blow to Nixon’s credibility and the discovery and release of the “smoking gun” tape the following year resulted in his resignation. Ervin’s federal career had begun in tragedy and ended in triumph. He resumed the practice of law and in 1983 wrote “Humor of a Country Lawyer”, a collection of wisdom and witticisms. Ervin died of emphysema on April 23, 1985. In his actions and votes, he always believed he was acting in accord with the Constitution.

Sam Ervin didn’t just have a political impact, he had a bit of a wider cultural impact as well. When on a TV show or film you see an attorney state humbly with a Southern drawl that they are “just an ol’ country lawyer”, this originates with Senator Ervin. He tended to like to use this line, and most notably did so as chair of the Senate Watergate Committee. Ervin played up his folksy lawyer image even though he had earned his law degree at Harvard.

“I’m just an old country lawyer, and I don’t know the finer ways to do it. I just have to do it my way.” – In response to objections over his aggressive questioning during the Watergate hearings.

“Had I but served my God with half the zeal I served my king, he would not in mine age have left me naked to mine enemies.”

“If men and women of capacity refuse to take part in politics and government, they condemn themselves, as well as the people, to the punishment of living under bad government.”