Eugene “Gene” Talmadge (1884-1946) was the central figure of Georgia state politics in the Great Depression. After a few false starts, his political career on the statewide level kicked off in 1926 when he was elected Commissioner of Agriculture despite the incumbent’s organizational and funding advantages. In his post, he used his power in a highly autocratic manner. Talmadge, who was popularly known as the “Wild Man from Sugar Creek” (the name of his plantation) used the department’s newspaper to give advice to farmers but also to spread his political views, which extolled the virtues of the market economy. Corruption prevailed in his department and an investigation by the Senate determined that he had violated the law by failing to deposit fertilizer fees in the State Treasury. He had also improperly used funds in an effort to raise the price of pigs. Responding to hecklers claiming that he committed theft in the latter incident, he retorted, “Sure I stole, but I stole it for you!” (Hill) However, the Great Depression was a time in which many voters were turning to unconventional political leaders. In Louisiana, the voters turned to Huey Long, and in Georgia they turned to Gene Talmadge. His talent for demagoguery and his image as a farmer who fights for the little guy had prevailed, and he was elected governor in 1932.

One promise Governor Talmadge followed through on that appealed to poor farmers was lowering vehicle license plate fees to $3, as the current rates made it difficult for poor farmers to legally drive. When the state legislature balked at his advocacy, he just did it by proclamation when the legislature was out of session! When the Public Utilities Commission refused to lower utility rates as Talmadge wanted, he simply created a new board that approved. When textile workers went on strike right before the 1934 election, he had them arrested and held in a former prisoner of war camp. Talmadge was not shy about using his power to get his way, even if this meant breaking and bending rules. Georgians were strongly divided on him, and his critics accused him of being a dictator, much like Long in Louisiana. Both Talmadge and Long also served as antagonists to FDR, but he came from a bit of a different place. He made clear his opposition to the New Deal and unsuccessfully tried to get other prominent Southern Democrats to back him, regularly engaged in racist demagoguery, and claimed to have read Mein Kampf seven times, for which he was praised by the press of Nazi Germany. In 1936, he was ineligible to run for reelection as governor so he tried to win the Democratic Senate primary but lost to incumbent Richard Russell. In 1938, he tried again with incumbent Walter George who was also fending off President Roosevelt’s candidate, Lawrence Camp. Talmadge lost to George, but he came in second. In 1940, he won yet another gubernatorial election, and would double down on his racism.

In 1941, he seriously considered granting clemency to several Klansmen who had been convicted of flogging a black man to death with a bullwhip, but backed off after the prosecutor, Dan Duke, publicly waved the whips used in his face. Talmadge also demanded the firing of the dean of the University of Georgia after he suggested that white and black students should attend class together. After the Board of Regents rejected this idea, he employed his usual MO, creating another board that did his bidding. This time, however, he had gone too far: The Southern Association of Colleges and Schools revoked accreditation for Georgia’s institutions of higher education. Talmadge lost the 1942 primary to Ellis Arnall, a racial moderate who managed to restore accreditation. His 1946 campaign focused on preventing black people from voting and condemnation of the Supreme Court decision Smith v. Allwright (1944), which ruled the “white primary” unconstitutional. As I wrote in my last post, Talmadge was in poor health by this time, as his affinity for hard liquor and cigars had caught up with him. While this didn’t doom his ability to win, it doomed his ability to govern, as he died less than two months after the election from cirrhosis of the liver. This prompted one of the most comical political controversies the state of Georgia ever saw. 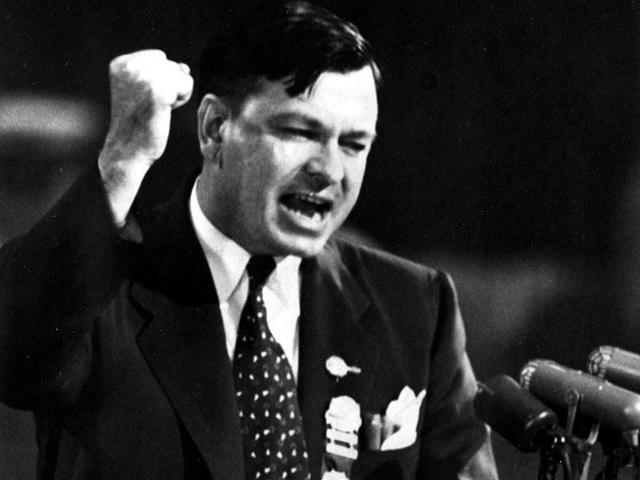 Talmadge’s death resulted in confusion as to who should be governor. Ellis Arnall, the outgoing incumbent, claimed he should remain governor until a replacement could be elected. His claim was hampered quickly when his son and campaign manager, Herman “Hummon” Talmadge (1913-2002), had changed the locks to the governor’s mansion and managed to lock Arnall out. Melvin Thompson, the Secretary of State, claimed he should be governor as he was next in the line of succession. Supporters of Talmadge in the Georgia State Legislature wrote in Herman, asserting that he was rightfully governor. The Georgia State Legislature ultimately elected “Hummon”, but the State Supreme Court subsequently ruled this as improper and ordered the seating of Thompson to serve until after the 1948 election. Talmadge was out, but not for long: he defeated Thompson in the 1948 Democratic primary. As governor, “Hummon” imposed a sales tax, built roads, and signed into law a measure requiring all voters to re-register as a means of keeping down the black vote. In 1956, he announced a run for the Senate, which caused the elderly and respected Walter George, who was not a racial demagogue, to call it quits.

As a senator, he often followed the views of his father, particularly in the 1960s. However, he supported a few key measures of the Great Society, including the Economic Opportunity Act (while supporting weakening amendments), Medicare, and food stamps. His support for the latter policy helped attract black support after passage of the Voting Rights Act despite his segregationist record. Despite gaining this support, Talmadge continued to vote against civil rights legislation up until the Carter Administration. He supported the Nixon Administration’s Vietnam War policy and socially conservative legislation. Talmadge’s national moment in the spotlight, however, was the recognition and praise he gained from his questioning of witnesses as a member of the Senate Watergate Committee. Ideologically, by the 1970s, his conservatism had started to wane despite his public image: his American Conservative Union life score, which accounted for 1971-1980, was only 54%. Unfortunately for Talmadge, right after the peak of his career in the Watergate hearings, life would get significantly worse.

He frequently struggled with alcoholism and after his son drowned in 1975 he hit the bottle hard. In 1977, Talmadge filed for divorce from his wife, Betty, which became public and contentious, with her alleging cruel treatment and routine drunkenness. She won a massive settlement, which included ownership of 100 acres of their plantation and access to the 1200 remaining acres. He was also the subject of a Senate ethics investigation, which found that he had improperly received $43,435.83 in reimbursements for non-existent expenses and had falsely reported them as campaign expenditures. Talmadge was censured by the Senate on October 11, 1979.

Talmadge sought another term in office, but rivals saw their opportunities. He attracted a challenger in the Democratic primary in Zell Miller, who received the endorsement of Coretta Scott King. Although he managed to fend off the Miller challenge, he faced a spirited Republican challenger in political activist Mack Mattingly. In a twist of events that merely twenty years ago was thought to have been impossible, a Republican defeated a Talmadge. It was the first time since Reconstruction that the state had elected a Republican to the Senate.

The Talmadges had a major impact on the state of Georgia, and although neither of them achieved the respectability and national prominence that Senators Richard Russell and Walter George did, Gene Talmadge stands as one of only two people to win four gubernatorial elections in the state and Herman served four terms in the Senate and played a role in taking down a president.