Most of the time it is difficult to point to specific political figures who aren’t presidents for major achievements that have a continual impact on our lives. In the case of Carter Glass (1858-1946), however, matters are different.

Life and Career Until Election to the Senate Born and raised in Virginia, Glass had early memories of the Civil War and Reconstruction, these experiences shaping him into what President Franklin D. Roosevelt called an “unreconstructed rebel”. This label he embraced with pride and it was the title of his biography. A journalist by trade, Glass started a successful newspaper, The Lynchburg News. By the 1890s, he had acquired the Daily Advance and the Daily Republican. During this time, Glass observed the enormous debt problems of the state of Virginia, and this made him conservative on fiscal matters. Despite being a Democrat, Glass often opposed fellow Virginia Democrats, whose fiscal policy he frequently opposed. Elected to the state Senate in 1899, Glass played a major role in the state’s 1901-1902 constitutional convention. This convention instituted numerous progressive reforms including a new state commission to regulate corporations. This was also the convention that instituted Jim Crow laws throughout the state, including an onerous poll tax that required that not only must the voter pay to vote in an election, but also for any elections he missed, making voting economically prohibitive for most blacks and many whites. This also included a literacy test, which was not standardized, rather graded by a registrar, opening wide the door to blatant racial discrimination. Glass made no bones about the racial motivations of election law changes: “to eliminate the darkey as a political factor in this State” and to guarantee “the complete supremacy of the white race in the affairs of government” (Stinnett, 2017). These measures were successful at this aim: the number of blacks who were qualified to vote fell by 86% after the adoption of the new constitution, eliminating any political clout they had. Glass and his allies were simultaneously contemptuous of the Fifteenth Amendment while claiming to be following it. Despite Glass’s stated intentions, these laws also impacted poor whites to the extent that only 5% of the state’s population determined who was governor, as only 5% of them would vote in the Democratic primary, the only election that mattered on a statewide level until the 1960s. For his role in this system, Glass was called by Historian J. Douglas Smith “the architect of disenfranchisement in the Old Dominion” (Stinnett, 2017). While Glass was capable of acts of great kindness to individual blacks he knew such as his chauffeur, he never thought of them as equals. In 1902, he was elected to Congress to fill a vacancy caused by the death of the incumbent.

Although Glass initially lacked power as a member of the minority party, he paid attention in the years he served on the House Banking and Currency Committee, becoming an expert on the subject by the time his expertise would be required. His time to shine arrived after the election of President Woodrow Wilson in 1912. As chair of the House Banking and Currency Committee, Glass played a crucial role in his sponsorship and involvement in drafting of the Federal Reserve Act. In 1918, Wilson appointed Glass Secretary of the Treasury, where he was effective in selling bonds to fund the war effort. In 1920, Senator Thomas S. Martin died, and Glass was appointed to fill the vacancy. 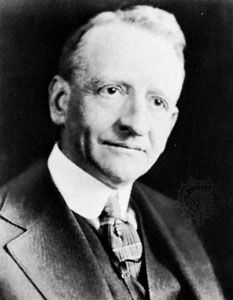 As a senator, Glass again started out having limited power in a Republican-controlled legislative body. He stood as one of the more centrist members of the Democratic Party of the time, supporting lower rates of income taxation than most of his fellow Democrats while nonetheless frequently opposing Republican policy. During this time, he warned of a coming economic crash, which occurred on Black Friday in 1929. Although he was growing increasingly conservative on numerous issues, he sided with progressive Democrats on banking and in 1933 he sponsored the Glass-Steagall Banking Act, which separated investment banks from retail banks. It turned out race wasn’t the only subject in which he approved of segregation. However, upon the election of FDR, Glass would not be operating from a position of friendliness to a Democratic administration. He had been offered the post of Secretary of the Treasury by FDR, but Glass suspected correctly that he had significant differences with the incoming president on such matters.

Glass the Foe of the Roosevelt Administration

Among Democratic senators, Glass was one of the most hostile to the New Deal. Although he backed FDR’s economy measures, he also opposed key pillars of the New Deal designed to raise agricultural prices. He opposed the Agricultural Adjustment Act, invalidating gold clauses in contracts, and the confiscation of privately-owned gold. Glass also opposed the National Industrial Recovery Act, work relief legislation, the 1935 wealth tax, Social Security, and the Fair Labor Standards Act. Among Democratic Senators, he, along with Thomas Gore of Oklahoma, were the Roosevelt Administration’s strongest critics. Glass even voted against the Reciprocal Trade Act, the only federally elected official from his state to do so. He generally supported lower tariffs, but he opposed the transfer of power from Congress to the Executive. Unlike Gore, however, Glass was an institution in the state of Virginia and a friend of the state’s ruling Byrd Machine, thus he was politically invulnerable. Despite his policy differences, he backed Roosevelt for reelection and quipped after his 1936 victory, “It is well nigh impossible to beat a five billion dollar campaign fund” (Hill). This was in reference to popular support for expensive work relief programs. Glass had other reasons to oppose this expansion of federal power: he predicted that the expansive use of the Commerce Clause would be used to justify civil rights legislation in the future. In 1937, he went to the radio to speak against Roosevelt’s court-packing plan, and although he initially thought he was going to lose this battle, it turned out to be FDR’s worst legislative defeat.

Glass the Friend of the Roosevelt Administration

Despite his many policy differences with FDR, the two remained on friendly terms. Glass did vote for the Tennessee Valley Authority and the Securities and Exchange Act, but most importantly, he was an unwavering supporter of the president on foreign policy. Some of Roosevelt’s bitterest political feelings were reserved for opponents of his foreign policy, but not his domestic policy as there were numerous people in the Democratic Party who had issues with his domestic policy while favoring his foreign policy and were too great a faction in the Democratic Party to alienate at the time. After the declaration of war, Glass became more supportive of the administration and this coincided with his downturn in health. Glass’s health had always been fragile:  a man of 5’4″ and only 100 lbs., he had such a sensitive constitution he would tiptoe to avoid upsetting his stomach and by 1942 his digestion was wrecked. His status as an “unreconstructed rebel” did not only apply to his politics as he fought through his health issues, but by this time he was ready to give up and his problems resulted in him becoming an invalid. Yet, again fitting his label, he refused to quit the Senate despite not attending sessions of Congress.

From his recorded pairs* in the era, we can know that he supported legislation to stop wartime strikes, supported a shockingly liberal soldier vote measure, opposed tax relief, and proved a strong internationalist. Despite being slightly older than the late Theodore Roosevelt, he even managed to outlive FDR by a year, who was 24 years his junior. He finally lost his mortal struggle in 1946 to congestive heart failure at the age of 88. Glass had been the last serving senator to be born before the Civil War.

Carter Glass’s accomplishments are very much with us today, from the continued existence and influence the Federal Reserve has on our economy to the Jim Crow legacy left by the influence by him and others at the Virginia constitutional convention. Many people who are politically aware can recognize his name as the Glass from “Glass-Steagall Act” but don’t know the full extent of how he influenced American banking. Glass, the stubborn “unreconstructed rebel”, is easily the most influential American legislator in the history of American banking.

*- Casting a “pair” is an expression of how a senator would have voted had they been present. Another senator of the opposing view also “pairs” out so as not to upset the outcome of the vote. The most recent example of a “pair” was Senator Lisa Murkowski (R-Alaska), the sole Republican to oppose the confirmation of Justice Brett Kavanaugh, not voting because supporter Steve Daines (R-Mont.) couldn’t be present as he was attending his daughter’s wedding.