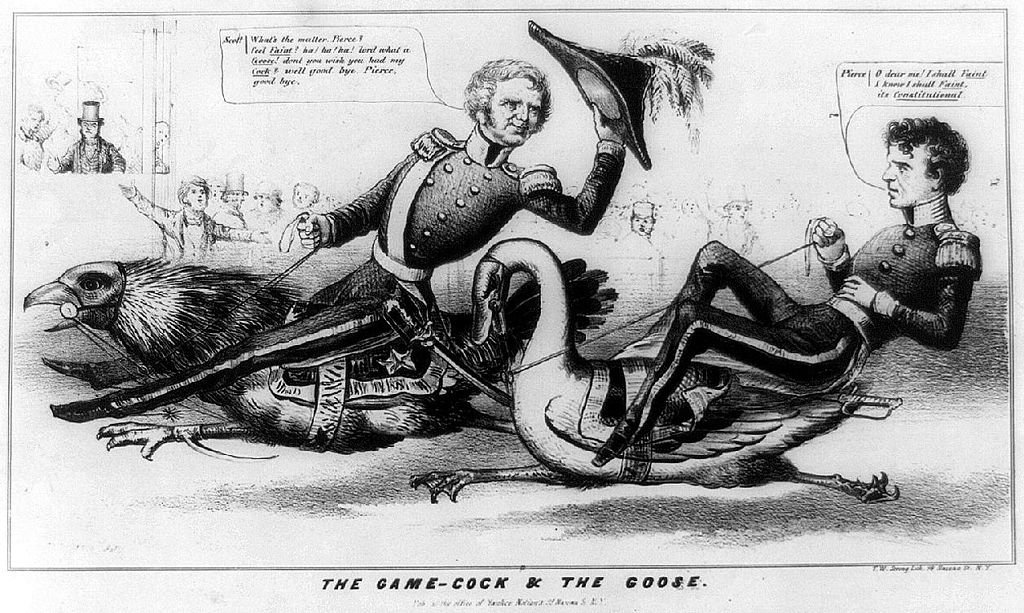 The America of 1852 was of course much different than the America we know now. First and foremost in people’s minds is the existence of slavery, which was a festering issue of its time. In that year, the president was Millard Fillmore, the “most forgotten president”, even if the designation doesn’t make him that anymore. He was, however, the latest disappointment for the Whig Party. Although Millard Fillmore considered himself “anti-slavery”, he was rather weak in practice: Millard Fillmore’s embrace of the Compromise of 1850, specifically his signing of the Fugitive Slave Act, enraged “Conscience Whigs” (anti-slavery) but pleased “Cotton Whigs” (pro-slavery). The Fugitive Slave Act made it the responsibility of the federal government to track down runaway slaves and in free states this policy encountered a lot of resistance. However, the slavery issue hadn’t boiled over in national tensions yet. Americans in 1852 wanted to elect someone who wouldn’t serve to inflame the political atmosphere. 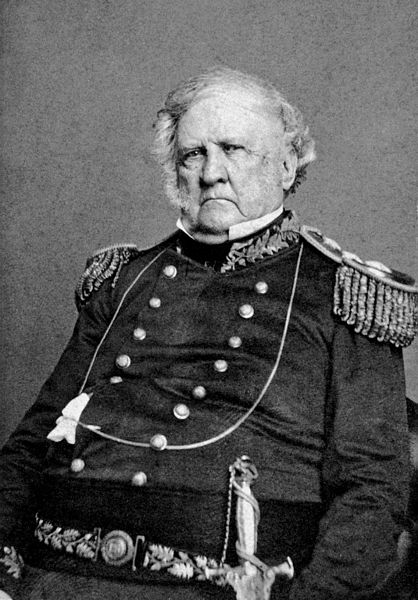 That year, the Whigs decided to dump President Fillmore in favor of Commanding General of the U.S. Army Winfield Scott. The choice made sense: the presidential elections the Whigs won (1840, 1848) both had war heroes as the candidates. Unfortunately, both William Henry Harrison and Zachary Taylor died in office and both were succeeded by men who the Whig Party gave the boot. Scott was known as “Old Fuss and Feathers” for his insistence on military etiquette. The Democrats, however, also looked towards a man of military accomplishment: Franklin Pierce.

Franklin Pierce, the leader of the New Hampshire Democratic Party who people referred to as “Frank Perse” (yes, he pronounced his last name that way), helped his political career significantly during the Mexican-American War by applying for and receiving a commission to command by President Polk. He served under the command of General Scott during the Mexican-American War. He had proved capable for the brief time he served, despite an unfair accusation that he fainted out of fear in battle that earned him a derisive moniker from his opponents: “Fainting Frank”. He had in truth passed out from the pain of his leg being crushed under a fallen horse. A staunch Jacksonian Democrat, Pierce’s central issue was not national banks or currency, but opposition to the abolitionist movement. Although not a slaveowner himself being from New Hampshire, his friends on the national political scene were. He counted his closest ally in Senator Jefferson Davis of Mississippi, who would later be President of the Confederacy.

Since both candidates had little differences in policy, personality was the name of the game. Pierce had the advantage of being from a free state yet opposed to abolitionism at a time in which many American voters thought this to be extreme. Winfield Scott, despite being a Southerner by birth and upbringing, had an anti-slavery perspective that alienated Southern voters. Alexander Stephens, as the time a “Cotton Whig” from Georgia and future Vice President of the Confederacy, refused to endorse him. Despite Scott’s reputation, he, like Pierce, backed the Compromise of 1850. Numerous controversies about Scott’s military career surrounded him despite his accomplishments and Pierce proved to be more charismatic on the campaign trail. Pierce’s campaign’s slogan was “We Polk’d you in ’44, we’ll Pierce you in ‘52”. Pierce ultimately won in a blowout, winning all states but Kentucky, Massachusetts, Tennessee, and Vermont. He also won by almost eight percent in the popular vote, which was the greatest mandate for a president since James Monroe’s unanimous victory in the “Era of Good Feelings”. History, however, tells us that Pierce was anything but a safe candidate. 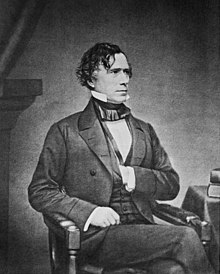 As a “doughface” (a Northern politician who took the Southern position on slavery), Pierce signed into law the Kansas-Nebraska Act, which violated the balance between free and slave states. Signing this single act into law resulted in the catastrophe of “Bleeding Kansas”, the creation of the anti-slavery Republican Party, and brought the country, more than anything else, on the course to war. Like the Whigs dumped Fillmore, the Democrats would dump Pierce in 1856 in favor of James Buchanan, who had the political advantage of being overseas for most of Pierce’s presidency. Winfield Scott would historically fare better, recommending as commander at the start of the Civil War the Anaconda Plan, which would choke the South of resources gradually through a sea and land blockade. The proposal, although what was ultimately adopted, was not politically popular at the time and he was retired in favor of George McClellan, who completely misread the strength of the Confederacy. Sadly for New Hampshire, their only contribution to the presidency was the dreadful “Frank Perse”. Their punishment has been to have presidential candidates descend upon their state and try to ingratiate themselves with the locals to win their approval every four years.