Where did New York City stand on the Civil War? The answer to this question is rather complex and much of it involves two brothers who were always on the border of treason. Fernando (1812-1881) and Benjamin (1820-1900) Wood were figures who helped define New York City politics, and especially did so during the Civil War. Although both men served intermittently in Congress, Fernando was more of the politician than Benjamin, who was interested in media and bought the New York Daily News in 1861. As Grand Sachem of Tammany Hall as well as Mayor of New York City, Fernando Wood was as corrupt as he was handsome and set up the system that Boss Tweed used so greatly to his advantage. Taking bribes, ballot stuffing, and vote buying were regular practices under Wood’s system. He made a casual effort to restrict prostitution on street corners, but had no interest in cracking down on brothels. Wood simply wanted to give New York City an increased appearance of wholesomeness while all sorts of graft occurred under his watch. He resented the level of interference in New York City’s affairs from moral conservatives in Albany, whose state prohibition law he ignored to the delight of his Irish constituents. Additionally, Wood eagerly welcomed new immigrants into the city as they often proved to be votes for Tammany Hall. Although defeated for reelection in 1857, he managed to found the Mozart Hall faction of New York Democrats that frequently battled Tammany Hall. He was elected back into office in 1859, serving until 1862. 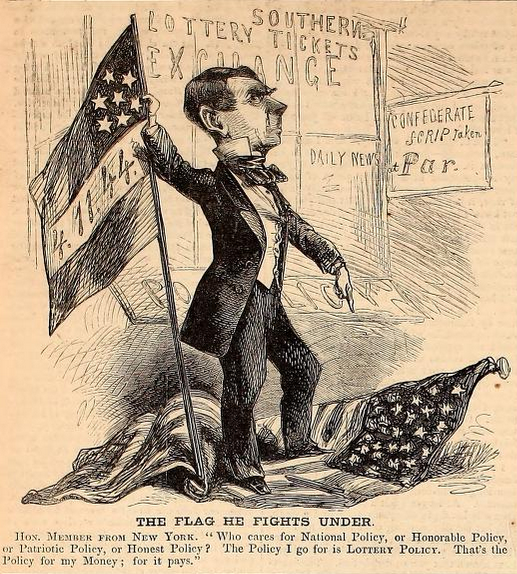 Cartoon portraying Benjamin Wood preferring his lotteries over his country.

Upon the outbreak of the Civil War, Mayor Wood offered up a most unusual proposal for New York City: that it secede from the Union as its own separate national entity. Although rejected by the Common Council, it was true that New York City profited from the production of cotton, and Wood wanted to see not only New York City’s but his own bottom line and power through patronage continue to prosper. He also stated his case against federal abolition of slavery in terms of support for the working men of New York City, stating that “until we have provided and cared for the oppressed laboring man in our own midst, we should not extend our sympathy to the laboring men of other States” (New York Times). Fernando always walked a tightrope between loyalty and treason and was a frequent White House visitor who consistently tried to ingratiate himself with President Lincoln despite his blistering public criticisms of his administration, and this was to his annoyance. Wood played both sides of the fence for his own political gain: he also assisted Lincoln in raising $1 million for the Union war effort, perhaps in an effort to shed the image of him being disloyal. He was a most duplicitous fellow and a scoundrel to boot.

Fernando Wood is portrayed in the movie Lincoln as a staunch opponent of the 13th Amendment, which he was. He attacked War Democrats who supported the amendment as having “a white man’s face on the body of a negro” (Vorenberg, 43). The brothers did not shy away from using racist rhetoric to justify slavery and criticize the Civil War. Benjamin Wood’s New York Daily News, a propaganda outlet for Mayor Wood, regularly editorialized outright racism, and even beforehand it had editorialized that if Lincoln won the 1860 election, “we shall find negroes among us thicker than blackberries swarming everywhere” (The Lehrman Institute).  The paper became outright scandalous when it was shut down by the government in 1861 for abetting treason, and would not reopen until 1863. The public came to believe that Ben Wood himself was a traitor, which he may or may not have been. What is clear is that he and Fernando were Confederate sympathizers. In the meantime, he wrote a commercially unsuccessful novel, Fort Lafayette; or Love and Secession, a pro-secession book. The fiery editorials in the New York Daily News against the draft played a role in inciting the draft riots, which resulted in the deaths of approximately 120 mostly black people in Manhattan and the destruction of millions of dollars worth of property including the burning down of a black orphanage (the orphans were evacuated beforehand). As a consequence, many blacks moved to Brooklyn or New Jersey and the city became more de facto segregated.

After the Civil War, both brothers remained a presence in New York City politics. Fernando even was regarded as a leading House Democrat but could never be the party’s leader as he sided with Republicans too often on fiscal issues, making him one of the more conservative Democrats. He did, however, become chair of the House Ways and Means Committee in his final years. Fernando would die of a heart attack on a visit to Hot Springs, Arkansas in 1881, while Benjamin would continue to run the New York Daily News until his death in 1900.

The legacy of the Wood brothers is such that there are no memorials and honors for them and nor shall there be, yet they played a major role in the politics of New York City. Like the Confederates they sympathized with, they cared more for their part of the country than the nation as this position served to line their pockets. They were, however, more clever about it and even managed to continue their careers without serving a day in jail. Their sympathies to the Confederacy, while strange to modern readers when they think of New York City, make sense in their time due to their investments in the South and their dislike of Albany Republican efforts to rein in Democratic power and corruption. Their sort of corruption would continue to be played out throughout Tammany Hall’s existence.