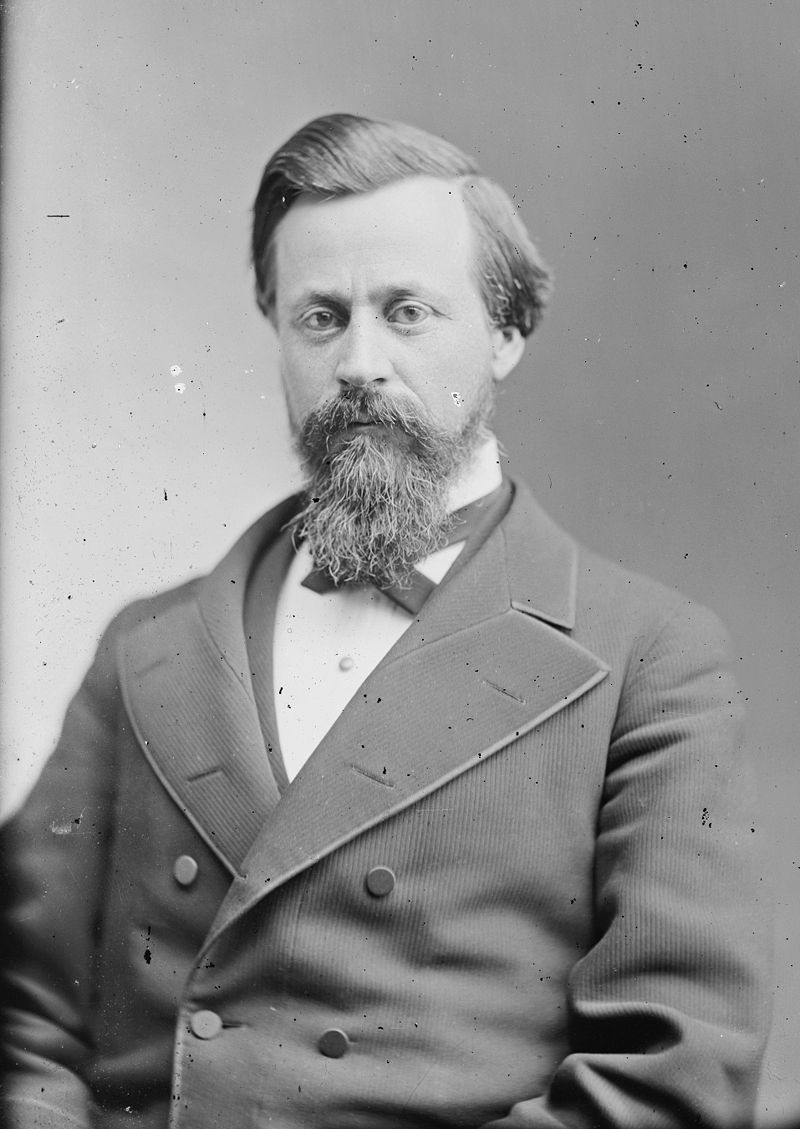 Senator Henry W. Blair (1834-1920) of New Hampshire was generally a traditional conservative Republican, but he saw a major crisis in the United States that he believed required government action: illiteracy. As chairman of the Senate Education and Labor Committee, he was alarmed by the high illiteracy rates in the South, among both whites and blacks. He feared that many Southerners, especially blacks, were living in ignorance of the alphabet and argued that “ignorance is slavery” (Rodriguez, 195). Blair and his supporters saw this measure as an antidote to moral degeneracy, economic malaise, black poverty, and uninformed voting. He was willing to extend federal aid to education to combat the problems of ignorance, and in 1881 he introduced his education bill. Blair’s bill was a ten-year program that would allocate federal funds based on illiteracy rates, which would result in 75% of the benefits going to the South. The funds would gradually decrease per year until its sunset. Although Southern Democrats you would think would oppose federal involvement in education given the Jacksonian view of states, the measure received significant crossover support from them as the measure didn’t dictate how the states were to use their benefits aside from ensuring that both whites and blacks got aid. Many Southern whites didn’t see the measure as challenging Jim Crow as it didn’t dictate that schools be integrated, and this was an argument Southern senators used to try and get some of their hesitant colleagues to back the bill. Both of Virginia’s Democratic senators, for instance, voted for it in 1890 as did one of Mississippi’s and one of Alabama’s senators. Prominent black politicians and activists also urged passage as they figured that this literacy bill was better than none at all, given that the black illiteracy rate at the time was 47.7% (the white rate nationwide was a little under 7%). The strongest opposition to this measure actually came from Northern Democrats, a situation that today is nigh impossible. This was also a unique issue in which blacks and some Southern whites could unite in support.

The Senate voted on the bill four times but the circumstances were never quite right for its passage. Although the Senate passed the bill in 1884, the Democratic House, led by Bourbon (conservative) Democrat Speaker John Carlisle of Kentucky, shelved the bill. The measure was passed again in a Republican Senate in 1886 and 1888, but the president was Grover Cleveland, another Bourbon Democrat. Support for the measure dropped somewhat since 1884 which portended future developments. In 1890, the stage seemed to be set for the bill: Republican Benjamin Harrison was president, and as a senator he had voted for the bill. Better yet, Republicans controlled both Houses of Congress. Theoretically, this bill should have passed given the circumstances. However, matters got complicated.

First, enthusiasm had declined: Benjamin Harrison was noncommittal on the bill now, not viewing it as a priority. Second, conservative Republican opposition was growing as constitutional doubts plagued the measure and some Republicans, such as John Ingalls (R-Kan.), were hostile to the South and argued for an alternative formula on the basis of population. Third, some Southern whites didn’t want the bill because it would educate blacks beyond performing menial labor. Fourth, many Democrats harbored suspicions that this was simply a way for the GOP to dump a budget surplus caused by high tariffs. Although Senator William Evarts (R-N.Y.), the man who had led Andrew Johnson’s impeachment defense, offered a passionate and compelling defense for the bill’s constitutionality, he couldn’t save the Blair Bill as he had Johnson’s presidency. The measure failed 31-37 on March 20, 1890, shocking Blair, who thought he had the votes. Some senators who had previously voted for or had been reported as favoring the bill changed their minds. Unfortunately for him, this ended the bill’s prospects and he lost re-nomination that year. Blair briefly served as Minister to China under President Harrison but ultimately resigned after the Chinese government objected so strongly to him having voted for the Chinese Exclusion Act that they declared him persona non grata. Aside from a brief return to the House in the 1892 election, his political career was over.

Ultimately, the waning Republican support of the Blair Bill that resulted in its defeat was a symptom of declining Republican commitment to black interests. That same year, Congressman Henry Cabot Lodge (R-Mass.) had pushed a bill to enforce voting rights in the South, but because support and opposition to the bill was highly partisan, it could not overcome a Senate filibuster. The Democrats made the Lodge Bill part of their campaign against the Republicans, and the dismal results for Republicans in the 1890 House midterms were a factor in them scaling back their commitments to black voters. Presidents McKinley, Roosevelt, and Taft did not pursue civil rights legislation and the party would not seriously pursue civil rights legislation again until 1922, when President Warren G. Harding endorsed anti-lynching legislation. The Blair Bill stands today as a footnote of history, a lost opportunity, and an interesting precursor proposal for federal involvement in education.

“To Order Engrossment and Third Reading of S. 185, A Bill to Aid in the Establishment and Temporary Support of Common Schools (P.2429)”. Govtrack.

This was the final vote on the Blair Bill. Blair himself voted against so he could potentially reintroduce it later under Senate rules.