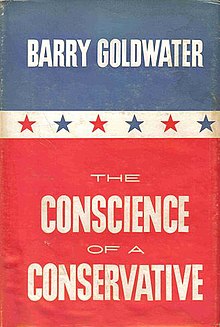 Goldwater denies there is a conflict between state’s rights and civil rights, if both terms are properly defined. He describes how a “civil right” is created: “A sociologist writes a paper proposing to abolish some inequity, or a politician makes a speech about it – and, behold, a “new civil right” is born!” (32) Goldwater’s definition of civil rights is limited to what is clearly protected by the law. Thus, suffrage without race restrictions is one of them, as is the 14th Amendment. However, he holds that States must be the highest government actors in education and concludes that the Constitution “does not require the States to maintain racially mixed schools” (33-34). He also states that the Federal government can’t force the South to do so based on the 14th Amendment, as historical evidence indicates that the people who voted to ratify did not intend for it to be applied to segregation. Goldwater adds, “I believe it is both wise and just for negro children to attend the same schools as whites, and that to deny them this opportunity carries with it strong implications of inferiority. I am not prepared, however, to impose that judgment of mine on the people of Mississippi or South Carolina, or to tell them what methods should be adopted and what pace should be kept in striving toward that goal. That is their business, not mine” (37).

This is easily the section of the book that has aged the worst. Goldwater, however, isn’t lying when he states his supports desegregation: he desegregated Arizona’s National Guard two years before President Truman issued the order desegregating the U.S. Army (which Goldwater lobbied the military brass to do), he desegregated his family’s department store, and he backed the desegregation of the Phoenix public school system as a councilman. It is clear, however, that if Goldwater was elected president in 1964 and fully followed his philosophy while in office, the only new legislation he would approve of would be voting rights legislation in the name of enforcing the 15th Amendment. Perhaps it was his belief that if voting rights could be enforced, the rest would follow. To most modern readers, Goldwater looks at best naïve on the subject of civil rights and are not likely to regard the constitutional questions being as important as the urgency of remedying the second class citizenship of blacks in the South.

Contrary to those who believe that Alexander Hamilton’s stance on federalism amounts to “federalize everything”, Goldwater provides the following quote from him: “…supervision of agriculture and other concerns of a similar nature…which are proper to be provided for by local legislation, can never be desirable cares of a general jurisdiction. It is therefore improbable that there should exist a disposition in the federal councils usurp the powers with which they are connected; because the attempt to exercise those powers would be as troublesome as they were nugatory” (38). Hamilton, thus, would have almost certainly opposed the agricultural legislation established under the New Deal. Goldwater staunchly opposes price supports and production controls, finding that they have led to tremendous waste.

In the process of making his arguments, Goldwater cites a decision that has never been overturned by the Supreme Court, merely ignored like the drunken, conspiracy-spouting uncle: United States v. Butler (1936). This decision overturned the Agricultural Adjustment Act and established that the phrase “general welfare” served as a qualification of the power to tax, not an enablement of the government to regulate agriculture. He then discusses a precedent that both he and I find truly terrible: Wickard v. Filburn (1942), which upheld the second Agricultural Adjustment Act and went as far as to hold that a farmer who used surplus wheat to feed himself impacted interstate commerce as it precluded him buying wheat from another farmer, thus having a potential impact on interstate wheat prices. Under such reasoning, the question no longer is what falls under the Commerce Clause, but what doesn’t fall under the Commerce Clause?

Goldwater wants the market on agriculture to be free to save the nation from the waste and tax burdens that come out of these programs, calling for the “prompt and final termination of the farm subsidy program” (42). He condemns the soil bank and acreage retirement programs under Eisenhower, holding that they are simply an updated Republican version of the crop destruction regimen under FDR’s Secretary of Agriculture, Henry Wallace. Farmers get paid to not farm under these programs to not impact prices. It is Goldwater’s belief that farmers want to be independent of government and are willing to take their chances in the market. The agricultural part of conservatism often gets forgotten because this happens to be an area that sometimes urban liberals can side with Republican conservatives on since, in my view, they care more about equality than expanding government. Although most of their proposed solutions involve expanding government, some of them abhor expansions that make some farmers millionaires. Americans for Democratic Action, for instance, often didn’t count agricultural votes unless they involved foreign policy, such as subsidizing grain exports to the USSR. Additionally, conservative legislators are more likely to come from rural areas and thus make exceptions to their ideology in that area. The conservative view on agriculture takes a bit more courage from some conservative legislators.

Next time, I’ll cover the next two chapters: Freedom for Labor and Taxes and Spending.