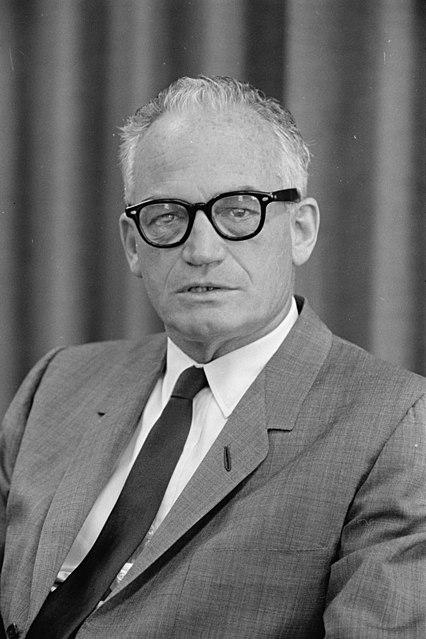 Today’s post consists of Goldwater weighing in against the powers of the federal government, holding that the size and scope are inconsistent with the intentions of the Constitution.

Chapter 2: The Perils of Power

Goldwater finds little difference in the words of Dean Acheson in his approval of the New Deal and a Republican spokesman in what he thought the proper role of the federal government. As he notes, both implicitly repudiate limited government and neither consider the Constitution.

Goldwater describes the Constitution’s setup as “a system of restraints against the natural tendency of government to expand in the direction of absolutism” (18). Such restrictions he lists include specific, limited powers the federal government is authorized to do, granting to the States or people the power not delegated to the feds, the three branches of government, and making constitutional amendments difficult to pass. Goldwater holds that we have not kept the system the Founders intended given the size and scope of the federal government’s activities. He cites as evidence for this is the amount of spending per year (almost $100 billion in 1960) and that the Chicago Tribune found that the federal government is the “biggest land owner, property manager, renter, mover and hauler, medical clinician, lender, insurer, mortgage broker, employer, debtor, taxer and spender in all history” (20).

Interestingly enough, Goldwater states as well, “nearly a third of earnings are taken every year in the form of taxes” (20). This is not much higher than the almost 30% rate paid by the average American today when all federal, state, and local taxes are accounted for. Something else to note about taxes in that era: the wealthy navigated their way through a complex tax code weighed down with exemptions and loopholes, so no one actually paid the statute rate of 91% on income. He also writes that Alexis de Tocqueville (an astute and prescient 19th century French observer of American life), predicted deterioration for a society that puts more emphasis on democracy than republicanism. Writer’s aside: learn how long Athenian Democracy lasted vs. Roman Republicanism.

Goldwater starts with a 1930 quote from the Governor of New York, who stated that the Constitution doesn’t grant Congress the power to deal with “a great number of…vital problems of government, such as the conduct of public utilities, of banks, of insurance, of business, of agriculture, of education, of social welfare, and a dozen other important features” (24). This man, of course, was Franklin D. Roosevelt!

Goldwater points out a very fascinating under-the-surface form of federal interference in the form of “grants-in-aid” for states in functions that are known only as the jurisdiction of the States. If the States agree to pay a portion, the Feds will cover a portion, which often is over half the cost. This proposition, he holds, is “a mixture of blackmail and bribery” (26). How so, you ask? Once federal funding is offered, State legislatures are unlikely to turn it down since if others didn’t do so it would look terrible politically. This makes refusal tantamount to political suicide. Washington designs the programs based on what they think States need, not the States themselves on what they think they need. Washington, you could say, makes an offer the States can’t refuse. Washington does not always act so indirectly as sometimes its representatives make threats for action should the states refuse. Goldwater gives an example of the Secretary of Labor directly telling States that if they didn’t enact unemployment compensation laws the Federal government found satisfactory, they would jump in. The list of functions Goldwater believes should have no federal involvement are numerous, and all the examples he lists are functions that are taken for granted today.

The Constitution effectively has been boiled down to guidelines, not a law on the question of relations between the Federal government and the States. There is an interesting exclusion in the state’s rights chapter –  never once is the term “civil rights” mentioned, because that is the next chapter! Yeah, that’s right. This post ends on a cliffhanger!