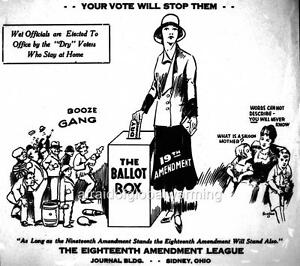 This year marks the 100th anniversary of when the Suffrage Amendment passed Congress, prohibiting the denial of suffrage on the basis of sex. The hot button social issues of 100 years ago were women’s suffrage and prohibition. Both sides of these issues attracted people on the American right and left in the day.

I have divided legislators into four categories:

The reformers supported both suffrage and prohibition. They rode the wave of political popularity in their day. Some likely would not have backed the positions they did had it not been for tremendous political pressure effectively employed by suffragettes and the Anti-Saloon League. Senator Warren G. Harding (R-Ohio) was a member of this group.

This group of legislators consisted mostly of Southern Democrats. They supported prohibition but opposed suffrage. This group professed belief in the evil of alcohol and that a woman’s place was not in politics. As much as they may have claimed “state’s rights” was their stance, they made a clear exception for Prohibition. Some legislators who played significant roles in the future who fell into this group were: future Speakers of the House William Bankhead (D-Ala.) and Sam Rayburn (D-Tex.) as well as future Secretary of State Cordell Hull (D-Tenn.).

This group of legislators opposed both prohibition and suffrage amendments. Although I don’t doubt that many of them believed that a woman’s place was in the home, they at least were consistent when they invoked state’s rights. Some of the opponents of the amendment supported its implementation in their own states, such as Rep. James Heflin (D-Ala.), who was proud that his district was dry but wanted to let the issue remain a state question. This group consisted of a minority of both Democrats and Republicans. Some prominent representatives of this group included Senators Henry Cabot Lodge (R-Mass.) and Oscar Underwood (D-Ala.), who led their parties in the Senate.

This group of legislators took the side of the consensus position of today. This group was a minority of Democrats and Republicans and included the Socialist London Meyer of New York and often represented urban areas.

With this sheet of votes, I have also included ratings from Mike’s Conservative Index. You read that correctly, I rated Congress from over 100 years ago. These votes occurred in the 65th Congress, with suffrage narrowly failing in the Senate in 1918. It would pass the following year. The reason I include the 1918 votes is so that you can see how the same crop of legislators voted on these issues. The meanings on this spreadsheet below are the same they were for the votes on the Civil Rights Act of 1964 I posted some posts ago.