I’m aware that Women’s History Month is in March, but this doesn’t stop me from covering the role of women in history at other times of the year. Although the first woman to serve in Congress was Jeanette Rankin of Montana, she served only two terms, and the second term was over twenty years after her first. Her greatest distinction, aside from being the first woman to serve, was that as a pacifist she voted against involvement in both world wars. Today’s post covers the first women who made serving in the House more than a one-time venture or merely succeeding their late husbands for the remainder of the term. All three have significant accomplishments in Congress ranging from funding the construction of the Golden Gate Bridge to the establishment of the federal minimum wage.

Florence Kahn (1866-1948) of San Francisco was the wife of Republican Congressman Julius Kahn, who had served for over twenty years beforehand and was notable for authoring a law that made Chinese exclusion from immigration permanent (it was repealed in 1943). However, by 1924, Julius was very ill and by the end of the year he was dead. Florence succeeded him and became known for her wit, support of conservative causes, and support for increasing the war preparedness of the United States. An example of such wit was when she was criticized by progressive Fiorello LaGuardia (R-N.Y.) for her support of the stances of ultra-conservative Senator George Moses (R-N.H.), and in response, Kahn, who was Jewish, responded “Why shouldn’t I choose Moses as my leader? Haven’t my people been following him for ages?” which elicited laughter throughout the House, including LaGuardia, whose mother was Jewish (Stone, 126).

Although she was assigned to the Indian Affairs Committee when she had none in her district, Kahn nonetheless committed herself to working on their issues. She was a strong supporter of funding for the Federal Bureau of Investigation, which won her praise from Director J. Edgar Hoover who dubbed her “the mother of the FBI” and would serve as a pallbearer at her funeral (Stone, 127). Kahn also succeeded in securing funding for the San Francisco Bay and Golden Gate bridges. By the 1930s, her conservatism manifested in opposition to most of the New Deal, resulting in her losing popularity in San Francisco. In 1936, she lost reelection to Franck Havenner, who ran on the Progressive and Democratic Party tickets.

Mary Norton (1875-1959) of Jersey City was the first Democratic woman to run for Congress without having succeeded her husband and the first to be elected from New Jersey. Her career was actively and staunchly supported by her mentor, Jersey City Mayor Frank Hague, the political boss of the southern half of New Jersey. Norton stood as a reliable liberal internationalist and overall a faithful supporter of the New Deal as well as loyal to Hague.

In 1932, she was selected to head the Democratic Party in New Jersey and in 1944 became a member of the Democratic National Committee. Norton perhaps has the most lasting legislative impact of the three women, since as chair of the House Labor Committee, she sponsored the Fair Labor Standards Act of 1938, which established a federal minimum wage. She also played a significant role in the passage of the Social Security Act. Norton also stood as a strong advocate of unions and of women’s rights and stood as a model. However, as a Catholic, she opposed the 1931 Gillett Bill, which would have provided federal funding for the dissemination of birth control information. Compared to today’s political and social environment, this seems a tame proposal. Norton also opposed the Equal Rights Amendment because hard-fought labor protections for women would be removed. Norton, at 75 years old, opted for retirement in 1950.

Edith Rogers (1881-1960) of Lowell, Massachusetts, was preceded in Congress by her husband, John Jacob Rogers, who had been elected in 1912. Edith was deeply involved in her husband’s campaigns and served as his political advisor. She also volunteered for the YMCA, Red Cross, and at Walter Reed Hospital. This experience led President Harding to appoint her his personal representative to visit veterans and military hospitals. Sadly, John Rogers developed cancer and died in 1925, aged only 43. She took over where her husband left off, and instead of stepping aside after finishing her husband’s term as many Congressional wives did, she forged a career of her own. In office, Rogers opted to de-emphasize her role as a woman, choosing to be regarded as another member of Congress who just happened to be a woman. During FDR’s first term, Rogers staunchly opposed the New Deal, voting against practically all of the First 100 Days legislation, but moderated after 1936. She also had mixed views on foreign policy: while she voted for a peacetime draft as well as repealing the Neutrality Acts, she voted against Lend-Lease, regarding it as a provocation to war. In 1939, she was the House sponsor of the Wagner-Rogers Bill, which, had it been adopted, would have taken in Jewish refugees. Her most significant legislative accomplishment was, with Veterans Committee chair John Rankin (D-Miss.), the GI Bill, which provided federal funding for four years of college education for returning soldiers. Rogers stood as an advocate of veterans and in 1949 joined Rankin in support of a veteran pension bill opposed by the Truman Administration. 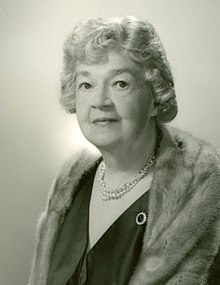 Rogers proved strongly supportive of anti-communist legislation and of the House Un-American Activities Committee investigations. She also never failed to vote for anti-subversive legislation. In the 1950s, Rogers called for kicking the UN headquarters out of New York City if Red China was admitted. However, this period saw a significant shift in her ideology: in 1949, the liberal lobbying group Americans for Democratic Action scored her a 0, but in 1960 she scored an 89. Rogers had shifted from the conservative to the liberal wing of the Republican Party. She was one of the Republicans who had changed numerous views after the election of Dwight Eisenhower, with the most notable change in her record being on public housing. In 1949, she had voted against the Taft-Ellender-Wagner Housing Bill, which included public housing, but after 1952 she regularly voted to increase public housing. It is quite possible that her district and the shifting political affiliation of Massachusetts overall contributed to this and other changes. Although she had won renomination in 1960, Rogers died of heart failure two months before the election.