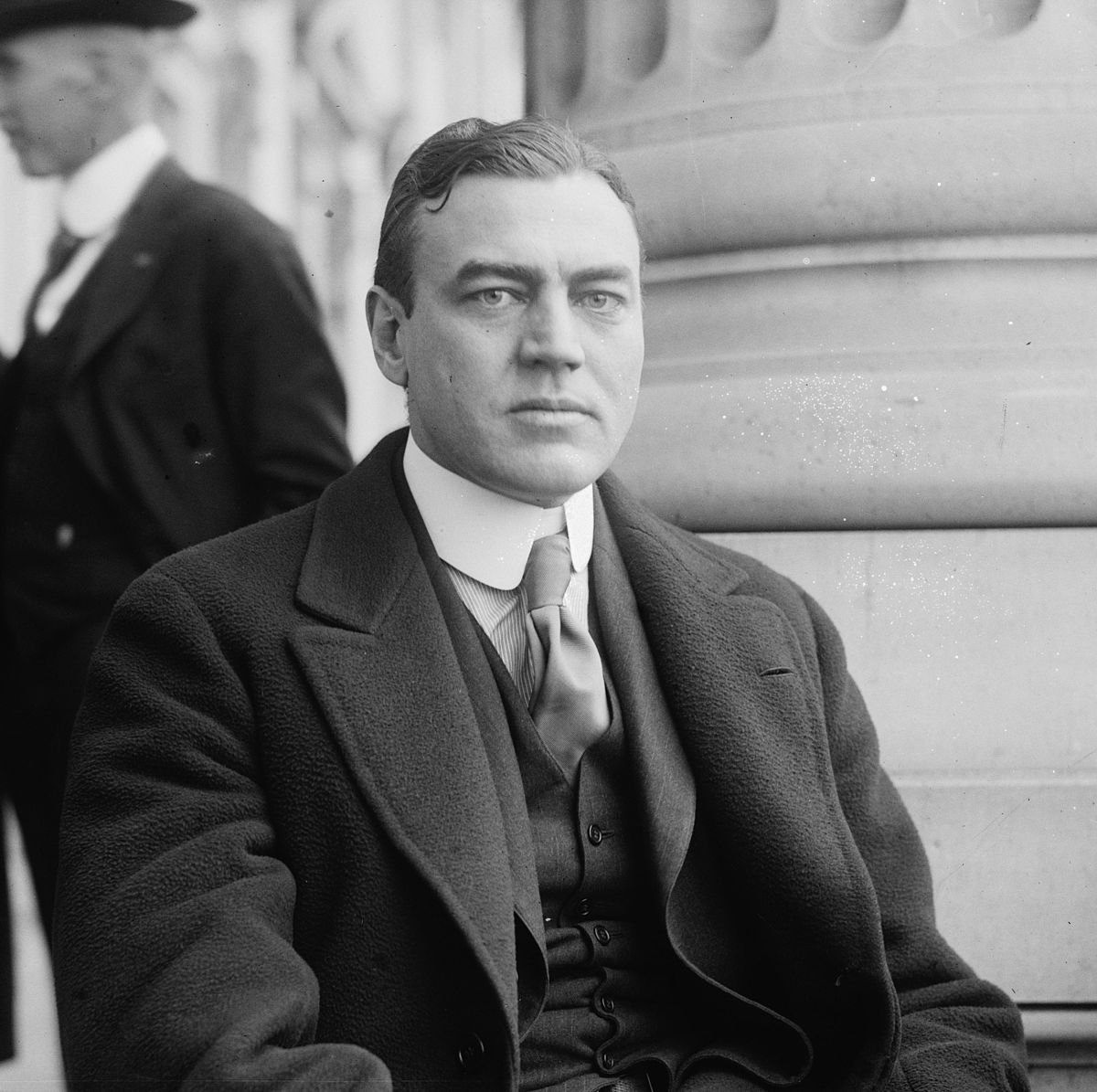 Born into a political family that included an officer of the American Revolution and Ulysses Grant’s Secretary of State, Hamilton Fish III (1888-1991) was bound to go places. In the 1912 election, he sided with Theodore Roosevelt over William Howard Taft and after serving as a Progressive member of the New York State Assembly, he went to war.

Officer in the Harlem Hellfighters

Fish had already been a Captain in the military by the time the United States entered war, and was assigned as an officer in the Harlem Hellfighters. There, he became aware of the plight of black Americans, especially when the locals and white soliders in Spartanburg, South Carolina, threatened violence against his troops. Fish instructed his troops to defend themselves if attacked. Ultimately, he was able to consult with the officers of other units and prevent an incident. As a Congressman, Fish would succeed in adding an amendment to the 1940 draft bill that prohibited racial discrimination in enlistments, a stepping stone to the eventual desegregation of the army. For his services in World War I, he was awarded the Silver Star, with the citation “…Constantly exposed to enemy machinegun and artillery fire, his undaunted courage and utter disregard for his own safety inspired the men of the regiment, encouraging them to determined attacks upon strong enemy forces. Under heavy enemy fire, he assisted in rescuing many wounded men and also directed and assisted in the laborious task of carrying rations over shell-swept areas to the exhausted troops” (Taylor).

In 1920, Fish was elected to Congress. During the 1920s, he was somewhat conservative but still at times voted to his Bull Moose roots. In 1922, he sponsored with Sen. Henry Cabot Lodge (R-Mass.) the Lodge-Fish Resolution, which endorsed the Balfour Declaration that called for a permanent home nation for Jews. That year he supported the Dyer Anti-Lynching bill, which if enacted would have established federal penalties for lynching. He would be a sponsor of another such measure in 1940. In 1930, Fish introduced a resolution to form a committee to investigate communism. As part of the committee’s activities, they investigated the ACLU as well as William Z. Foster, the head of CPUSA and the communist presidential candidate. The committee proved mostly unsuccessful in finding substantive evidence and in reporting its findings, the committee advocated granting the Justice Department more power to investigate communists and to strengthen immigration laws to keep communists out. Congress adopted none of these recommendations at the time, but forms of these recommendations would come to pass in the McCarran Internal Security Act in 1950 and the McCarran-Walter Immigration Act in 1952. Fish’s conservatism would grow after the 1932 election, as he came to oppose most measures pushed by the Roosevelt Administration and became one of its loudest critics, although not its most extreme: he supported Social Security and the federal minimum wage. As the country moved closer to war, he became ever more vocal on foreign policy. Although he was not the most extreme non-interventionist, he was the House’s most prominent and wielded some power as the ranking Republican on both the House Rules Committee and Foreign Affairs Committee.

The Campaign to Discredit Hamilton Fish

As the House’s leading opponent of American involvement in World War II, British Security Coordination engaged in an extensive and illegal intelligence campaign to paint Fish as a Nazi sympathizer. The BSC formed a front known as “Fight for Freedom”, and convinced numerous politicians to join, including Sen. Carter Glass (D-Va.) and New York City Mayor Fiorello LaGuardia. Journalists eagerly cooperated with BSC: on October 21, 1940, columnists Drew Pearson and Robert S. Allen suggested that the Nazis subsidized Fish through inflated rents they paid for property, which was false but damaging: Fish’s margin of victory was cut by over half that election year. On August 28, 1941, Fight for Freedom accused Fish of permitting the distribution through his Congressional frank of an anti-Semitic tract from American fascist William Dudley Pelley, which included an advertisement for the anti-Semitic forgery The Protocols of the Elders of Zion. Most newspapers didn’t carry the story, but the left-wing PM, which cooperated with BSC, did. FFF also claimed in a press release that Fish stated after he was reached by telephone on the matter that, “But it doesn’t bother me any…There’s been too much Jewism going around anyway…”(Mahl). Fish denied that he knew of or authorized the inclusion of the Pelley tract and his telling of the conversation differed from that of FFF. It is highly unlikely that Fish had authorized such inclusion or said what FFF alleged given his excellent past record on Jewish issues and the organization’s over-arching goal to destroy his political career. However, the issue of franked mail was not over for him.

Matters got worse for Fish on the subject when the Secretary-Treasurer for the Nazi propaganda front organization Islands for War Debts Committee, Prescott Dennett, learned that the feds were going to be raiding his offices. He had been engaging in a scheme to illegally use Congressional franks to distribute speeches by non-interventionist members of Congress to send them across the nation, making Congress into a propaganda machine. Dennett quickly transferred bags of illegally franked mail to Fish’s office (which refused to take the bags, leaving them outside) and the remainder to the America First Committee. PM’s headline on the subject read, “HAM FISH SNATCHES EVIDENCE WANTED IN U.S. NAZI HUNT” (Mahl). It turned out that Fish’s Chief of Staff, George Hill, had been collaborating with Dennett in this scheme. Hill was convicted of perjury as he lied under oath about whether he knew George Sylvester Viereck, Dennett’s boss and the leading Nazi propaganda agent in the U.S.

Unfortunately, Fish also aided in this effort himself by some actions that left a poor impression. First, he met with Nazi Foreign Minister Joachim von Ribbentrop and offered to mediate on the issue of Danzig (a Polish city that was 95% German and had a majority Nazi senate) to which Ribbentrop refused. He then flew to Oslo in the Foreign Minister’s private plane (he apparently had no other way to get to a conference in the city). After stepping off the plane, he proclaimed Germany’s claims in Danzig to be “just”. That he socially knew George Sylvester Viereck also did not help him. Ultimately, the New York state Republican leadership under Governor Thomas E. Dewey tired of Fish’s continued non-interventionism and got him redistricted. Although he won a hard-fought primary in 1944, he lost reelection to centrist Republican Augustus W. Bennet. The worst that could be said for Fish was that he was careless with his associations in his cause to keep America out of foreign wars.

Fish used the remainder of his long life to pursue anti-communist causes and to try to set the record straight. In 1947, he opposed the Truman Administration’s Greek-Turkish Aid measure as imperialist and came to the conclusion that increased foreign commitments would draw the United States into war, which would prove all too correct in Vietnam. He wrote several books on the subject, including Tragic Deception (1983). Fish’s longevity was attributed to the “enormous pleasure” he took in the growth of American conservatism and Ronald Reagan’s presidency.