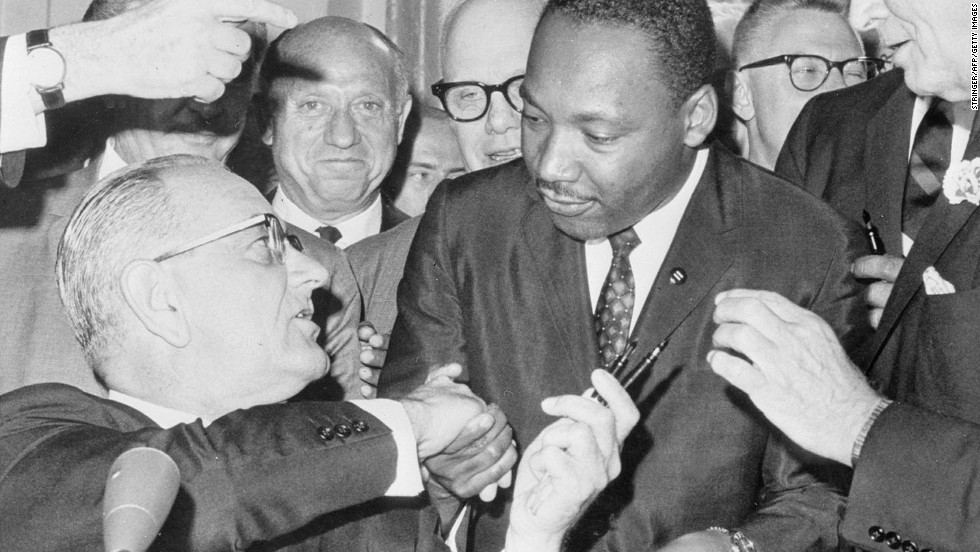 On June 19, 1964, one of the most significant laws in American history passed the Senate. After the first time in history in which a cloture vote (end debate with 2/3 vote) succeeded against a civil rights filibuster, the Civil Rights Act of 1964 passed 73-27. Because I like to look under the surface about these matters, it is of great interest to me that the votes surrounding this law are so extensive in the Senate that it provides the best picture of examining legislator attitudes on civil rights we are ever likely to see. Before the vote for passage on the bill, a whopping 120 votes were taken on proposals regarding it, nearly all of them being efforts of opponents to weaken the bill. I will not inundate anyone with that many, so the ones I have judged the most significant proposals relating to the bill I have listed here:

Sen. Albert Gore (D-Tenn.) motion to recommit the Civil Rights Act of 1964 with instructions to report the bill back with an amendment stating that federal funds should not be withdrawn from any school district unless that district had disobeyed a court order to desegregate.

The vote of the Senate on these proposals:

Of the 27 senators opposed, 19 could be considered opposed to the bill in its entirety. All were Democrats from states of the former Confederacy, although Strom Thurmond would switch parties on September 16, 1964.

Of the Northern Democrats, all but Robert Byrd of West Virginia strongly favored the act, while of the Southern Democrats, all but Senators J. Howard Edmondson and Mike Monroney of Oklahoma and Ralph Yarborough of Texas opposed. Perhaps the strangest of the records was that of Albert Gore of Tennessee, who strongly opposed Title VI (cut off funds for discrimination), voted to delete Titles I (voting rights) and VII (employment discrimination), yet supported Title II (public accommodations) while voting against the bill. Standing in the middle of it all were the Republicans, who had two historical legacies to consider: their history as the Party of Lincoln and their history of staunch support for business. Minority Leader Everett Dirksen’s (R-Ill.) leadership on pushing the bill got all but six Republicans to vote for the bill, one of whom was Barry Goldwater of Arizona, who was running for president.

Of the six Republicans who voted against the Civil Rights Act of 1964, only Ed Mechem of New Mexico was an opponent of cutting off government funding for discriminatory administration and none opposed prohibiting biased administration of literacy tests. The others opposed on the grounds of Titles II and VII, both of which covered the private sector. Southern Democrats had the most success swaying Republicans on Title VII, the employment discrimination part of the bill, as this was the part that could be most easily regarded as an extension of the New Deal and compared to the mandatory Fair Employment Practices Committee that the Conservative Coalition had killed fourteen years earlier.

In all, I am a big believer in votes being the most accurate way to ascertain ideology and beliefs among politicians, as opposed to their words. Unless there is a good documented reason as to why a politician voted other than belief, belief should be assumed.

P.S.: Because the “GOP was liberal back then” political mantra of the left is a pet peeve of mine, I must add here…

HR. 7152. Gore Amend. to Delete Title VI, Covering w/drawl of Federal Funds From Areas Where the Programs Are Administered in a Discriminatory Fashion. Govtrack.

HR 7152. Gore Motion to Recommit to the Judiciary Comm. Govtrack.