I have always opposed the prediction of the death of either the Republican or Democratic Party. One way or another, one of them will eventually screw up bad enough for the other to come back into power. The ultimate time in which the former seemed to be on the verge of death was during the Great Depression, and the man to help it out surprisingly was a man from the Bay State, Joe Martin (1884-1968). Congressman Joe Martin is today a forgotten man, even though he often served as his spokesman during the New Deal years. He was a short, dumpy fellow yet he managed to make his way to Speaker of the House. Martin made no memorable speeches and no major laws bear his name, yet he is perhaps more responsible than anyone else for the resuscitation of the Republican Party as its House leader from 1939 to 1959. His political start began in Massachusetts when he was elected to the state House, serving from 1912 to 1914. Martin then served in the state Senate from 1914 to 1917. In 1924, he ran in the Republican primary against Congressman William S. Greene, an octogenarian who had opposed the 19th Amendment. Martin used Greene’s age against him but the incumbent narrowly prevailed. However, Greene died shortly after the primary, leaving Martin free to run for and win the seat.

Martin was a protégé of President Calvin Coolidge and staunchly supported his policies. He tended to identify with the Republican Party’s Old Guard but could be pragmatic. This, combined with his people skills and the defeats of many Republican incumbents during the Great Depression, made him an ideal choice for the fast track to leadership: staunchly conservative Minority Leader Bert Snell (R-N.Y.) certainly thought and acted so. Martin opposed most of the New Deal and criticized elements of it as fascist and socialist. He voted against the National Industrial Recovery Act, the Agricultural Adjustment Act, and the Tennessee Valley Authority. Martin also supported alternatives to work relief that placed the distribution in state instead of federal hands and opposed FDR’s tax increases. However, he was not uncompromising: he voted for Social Security and a federal minimum wage. In 1938, Snell decided to retire and Martin was the clear choice for his successor. That year’s midterms were a triumph for the GOP, regaining much lost ground, but not near enough to be a majority. Martin was now Minority Leader. He was a man devoted to politics as he had little other focuses in his life. Martin was a lifelong bachelor, had no hobbies aside from collecting elephant figurines, and didn’t smoke, drink, or dance.

With this devotion to politics, he was able to cultivate ties with Southern Democrats, particularly his friend on the Rules Committee, Eugene Cox of Georgia, and they formed the Conservative Coalition. This alliance of Republicans and Southern Democrats aimed to block further New Deal measures and proved quite successful in these endeavors, leaving FDR to focus on foreign policy. By World War II’s end, gone were the Civilian Conservation Corps and the National Youth Administration  among others. On foreign policy, Martin supported preparation for war but opposed measures he thought would bring the United States closer to war, including Lend-Lease. His stances on foreign policy along with those of Reps. Hamilton Fish (R-N.Y.) and Joe Barton (R-N.Y.) led President Roosevelt to include them in a rollicking taunt of “Martin, Barton, and Fish” in 1940. 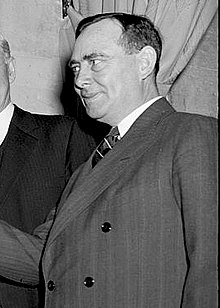 In 1946, shortages, particularly on meat, wore on the American public and the GOP put out a successful campaign slogan in “Had Enough?”, which catapulted the Republican Party into Congressional majorities for the first time since the Hoover Administration. Under Martin’s leadership, the 80th Congress pushed a conservative agenda on domestic policy and an internationalist agenda on foreign policy. The Congress passed over President Truman’s veto the Taft-Hartley Labor Act, tax cuts, and a bill loosening anti-trust regulations on railroads. On foreign policy, they passed the Marshall Plan and aid to Greece and Turkey, both measures President Truman championed. This Congress also conducted the HUAC Hollywood hearings, resulting in contempt citations for the “Hollywood Ten”, members of the American Communist Party, that landed the men in jail. Truman nonetheless derided the 80th Congress as the “do-nothing Congress” in the sense that they did nothing he wanted on domestic policy. He successfully ran against the 80th Congress, resulting in the loss of GOP majorities as well as presidential candidate Thomas E. Dewey’s (who wouldn’t defend the Congress) loss. Out as Speaker, Martin early and often opposed President Truman’s proposed successor to the New Deal, the Fair Deal.

On April 6, 1951, Martin sparked drama when he read a letter from Douglas MacArthur to him into the Congressional Record, which criticized President Truman and his allies’ conduct of the Korean War. MacArthur was promptly fired, resulting in a tremendous controversy. He regretted his exposure of the letter, as he hoped it would further MacArthur’s cause instead of getting him fired. In 1952, Martin thought MacArthur would be the prime choice for president, but when Eisenhower clinched the nomination, he was fully on board.

After the 1952 election, Joe Martin was back as Speaker and dedicated to pushing the Republican Party agenda and regarded the president’s agenda as synonymous. Therefore, he moved to support measures that bore similarity to measures that Martin and other Republicans had staunchly opposed under President Truman. This included substantive foreign aid packages, federal aid to education, and the construction of some public housing. The only issue Martin could not back Eisenhower on in his first term was on the St. Lawrence Seaway, as one of its impacts would direct commercial traffic away from New England. However, he also did not seek to obstruct the project. The more staunch conservatives in the party were unhappy with this course but Martin stood firm, thinking of these measures as for the good of the party as opposed to any sort of greater conservatism. He also maintained a close personal friendship with the Speaker of the House Sam Rayburn, which led to accusations that Martin gave in too much, which he hotly contested. Although the Republicans had gained Congress in 1952 only to lose it in 1954, they did maintain fairly healthy numbers until Martin’s argument wore thin in 1958. As I have written before, the 1958 midterms were a disaster for the Republican Party and many Republicans placed the blame on Martin. While in 1956, Eisenhower had publicly supported him staying leader, this time he maintained silence, and Martin narrowly lost to his more conservative deputy, Charles Halleck of Indiana. He was bitter over his defeat, but unlike the leaders of today, he didn’t retire.

The Final Years: Independence as a Backbencher

Now that he was out of leadership and relegated to the status of backbencher, Martin charted his own course. Martin’s record had grown more moderate during the Eisenhower years, and this trend accelerated. He thought highly of Nelson Rockefeller as a future presidential candidate and more often bucked his party. His reception to the New Frontier and Great Society were far friendlier than his responses to the New Deal and the Fair Deal, as he supported federal aid to education, federal aid to mass transit, the Economic Opportunity Act of 1964, Medicare, foreign aid spending, and the creation of the Department of Housing and Urban Development. Martin had not gone full liberal, however: he maintained his traditional opposition to public works spending for job creation, opposed rent subsidies, maintained his opposition to government encroachment into the field of power generation, opposed expansion of the food stamp program, and opposed the repeal of the “right to work” section of the Taft-Hartley Act. He also often supported Republican alternatives to Democratic domestic plans. On civil rights, he had consistently supported such measures since 1937, and voted for all the major laws during the civil rights era. Martin also managed to continue to wield some political influence.

The former Speaker managed to take revenge on Halleck for his defeat twice: in 1961, he gave crucial support to Speaker Sam Rayburn’s proposal to expand the Rules Committee by adding two Democrats and one Republican to the committee. The Rules Committee at the time was chaired by Howard W. Smith (D-Va.), who opposed most of his party’s national platform and worked closely with Halleck to block liberal measures. The vote to pass Rayburn’s proposal was close, and the Republicans who were swayed by Martin to vote for made the difference. The second time was when Martin cast his vote in 1964 for Gerald Ford over Charles Halleck as Minority Leader, a post the future president won. However, by 1966, Martin was himself an octogenarian and his health was in decline. Nonetheless, he wanted just one more term. Complicating matters was a 35-year old attractive woman named Margaret Heckler, who ran in the GOP primary against him to his left. Martin fought the challenge, but Heckler brought up his old campaign against the octogenarian Greene in 1924, and won the primary. Politics was Martin’s life, and with his career finally at an end, he lived only a little more than a year after leaving office.

In the end, Joe Martin was consistently interested in what he thought was best for the Republican Party, be that a Coolidge conservatism in the 1920s, a resistance to the New Deal and the Fair Deal, or Rockefeller Republicanism. It could be said in the end that he was a Republican with a big “R” and a conservative with a small “c”.