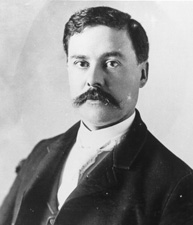 I know that John McCain recently passed into history, but I will write a post on him later as I already committed to writing this piece.

On July 3, 1890, Idaho was admitted to the union. Perhaps its most effective advocate for statehood was territorial delegate Fred Dubois (1851-1930), who personally lobbied President Benjamin Harrison for admission. In the process of doing so, he invoked that his grandfather had fought alongside William Henry Harrison at the Battle of Tippecanoe. This was not the only political connection Dubois had: his father had been a neighbor, friend, and supporter of Abraham Lincoln. As a child he was almost certainly a playmate of Lincoln’s children.

Dubois’s connection to the Lincoln family served him well as he managed to get Secretary of War Robert Todd Lincoln to post him as U.S. Marshal to the Idaho Territory. In this capacity, Dubois came to strongly oppose Mormons for their practice of polygamy, regarding the practice as lawless and immoral. He enforced the law with “a blatant ruffianism which in many instances violated constitutional guarantees of due process in law…” (Lowe, 4). Dubois also sided with the efforts of non-Mormons to disenfranchise them. As he wrote, “I became absolutely obsessed with the Mormon problem…The government was determined to stamp out polygamy and I felt I was the agent of the government and the people of the United States, and that the duty devolved upon me to see that the laws of the land were obeyed by the Mormon people in respect to their practices” (Lowe, 3-4). Dubois not only opposed polygamy, but the influence of the Church of Latter Day Saints (LDS) on state politics altogether.

Dubois’ acts were in a larger context of the government trying to end the practice of polygamy. In 1882, Congress passed the Edmunds Act, which prohibited polygamists from voting, holding office, or serving as jurors in cases involving multiple marriages (Schwantes, 161). For a time, he actually succeeded in his aim of disenfranchisement: the Idaho territory passed the Election Test Oath in 1885, which disenfranchised anyone who was a member of an organization that practiced polygamy, even if they didn’t do so themselves. Furthermore, they were deprived of most rights of citizenship. In 1889, the Idaho Constitutional Convention, following Dubois’ lead, wrote the oath into the Idaho Constitution. However, in 1890, LDS President Wilford Woodruff issued a manifesto forbidding further teaching and practice of polygamy, a major concession to the United States. The Test Oath was subsequently repealed in 1893, restoring Mormon suffrage. As Idaho’s delegate Dubois was not only crucial in winning its statehood but also cleverly masterminded his own election to the Senate. Although he was a Republican, Dubois was fiercely independent, taking positions not because they played well politically but because he believed they were right. Some of these went strongly against the direction of his party like his opposition to imperialism and the gold standard. The most notable one, however, was his persistent crusade against Mormons, which he did not drop after Woodruff’s 1890 manifesto. In 1896, Dubois left the Republican Party and became a “Silver Republican” but was defeated in 1897 when a coalition of Democrats and Populists took control of the Idaho state legislature and voted for Populist Henry Heitfeld. In 1900, Dubois defeated his former political ally Republican George Shoup and returned to the Senate as a Democrat, becoming the head of the party in the state (Lowe).

Dubois’ absence from the Senate had not cooled his fiery views on Mormonism. Giving fuel to his anti-Mormon pursuits was the controversy that arose in 1898 when Democrat and polygamist Brigham H. Roberts was elected to Congress from Utah’s At-Large district and not seated. This incident led to suspicions that polygamy had covertly still been in practice by the Church of Latter Day Saints. This was the backdrop for Dubois’ ferocious efforts at preventing Mormon Apostle Republican Reed Smoot, a monogamist, from being seated in the Senate.

Although rightfully elected to the Senate in 1902, Dubois and other senators opposed to Mormonism wanted Reed Smoot, one of the most powerful figures in the Church of Latter Day Saints, to be unseated. This effort expanded into a full-scale investigation of Mormonism, which found that in practice polygamous marriages were still occurring covertly. These covert polygamous marriages would not be fully cracked down on until 1909 and provided justification for anti-Mormon views. However, no evidence was uncovered in this investigation that indicated that Smoot, a man of impeccable character, was unfit for office. The fear behind Smoot’s seating was that he would put his religion before his country, which was similar to the accusations that JFK would serve the Vatican when he ran for president in 1960. Dubois’s efforts failed and the Senate voted for Smoot to be seated in 1907.  In the meantime, he supported conservation, supported William Randolph Hearst’s bid for the presidency, opposed the American occupation of the Philippines (he regarded its inhabitants as racially inferior), and continued to agitate for ending the Gold Standard. However, Dubois’ anti-Mormon stances were predictably playing poorly with the Mormon portion of the Idaho electorate, which turned strongly against the Democrats in the 1906 election. He had some awareness of what his crusade meant for his political future if he failed, writing “I myself have burned all bridges behind me, and will fight this contest out to the end, regardless of who suffers, I know, to begin with, that this ends my political career” (Lowe, 14-15). Indeed it did, as he was defeated for reelection by progressive Republican William Borah.

Dubois never returned to the Senate, but still participated in politics, supporting progressive causes and candidates regardless of party. Thus, he campaigned for Woodrow Wilson and supported the reelection of the man who defeated him, William Borah. Dubois spent his final years serving on a commission that addressed border disputes with Canada, serving from 1924 until his death on February 14, 1930.

Today it is possible for Mormons to hold positions of great power: six currently serving senators are Mormons. Dubois must have rolled over in his grave when Sen. Harry Reid (D-Nev.), a Mormon, became the leader of the Senate Democrats in 2005. He must have done so again when the Republican Party nominated Mitt Romney as their presidential candidate in 2012.