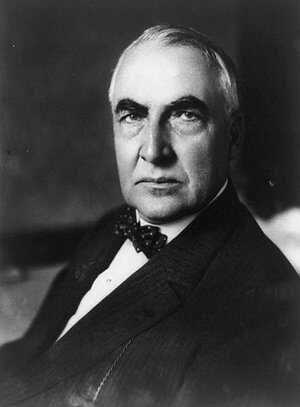 The most recent major political news has been on the conviction of Donald Trump’s former campaign chair Paul Manafort and his personal attorney Michael Cohen pleading guilty to making illegal “hush money” payments to Stormy Daniels allegedly at the direction of “the candidate”. Like so much in our political news, payments of hush money to mistresses are not unprecedented for presidents!

In 1920, one-term Senator Warren G. Harding of Ohio had presidential ambitions and was on the cusp of victory in the primary when he met with a group of Republican operatives. He was asked by operative George Harvey, “We think you may be nominated tomorrow. Before acting finally, we think you should tell us, on your conscience and before God, whether there is anything that might be brought up against you that would embarrass the party, any impediment that might disqualify you or make you inexpedient, either as candidate or as President” (Flynt & Eisenbach, 93). After ten minutes of thinking alone, he confidently stated, “Gentlemen, there is no reason in the sight of God why I cannot be president of the United States” (Flynt & Eisenbach, 93). However, Harding had a problem…several in fact: his extramarital affairs. His announcement of his run for president had really put out his main mistress, Carrie Phillips. She had been carrying on an affair with Harding for fifteen years and had hoped that he would serve out his term as senator, divorce his wife, and retire with her. Her hopes dashed with his presidential run, Phillips confessed the affair to her husband Jim, and they concocted a blackmail scheme.

This wasn’t the first time Carrie Phillips had blackmail on the mind: as a German sympathizer (during both World Wars, and was investigated by the feds!) she attempted to do so if he voted for war with Germany in 1917. Despite this threat, he voted for war with all but six of his fellow senators. Harding initially responded to the blackmail by buying her a new Cadillac and offering a $5,000 per year salary, but she wanted more (Boertlein). Since he could offer no more, he had to fess up to a horrified Republican National Committee about his situation. As he was already the nominee, they had no choice but to pay up. The RNC agreed to give Jim and Carrie Phillips a payout of $20,000 to take an all-expenses paid trip to Japan, China, and Korea along with $2,000 per month as long as Harding remained in office. Although this was the major payment that had to made, there were other demands after Harding was elected. Phillips demanded her brother and son-in-law be given federal posts, and the demands were met. Harding was also pressured to nominate Jim Phillips as Ambassador to Japan and briefly considered it, but the proposal was shot down given the complete lack of qualifications of the small-time shop owner from Marion, Ohio. There were other affairs as well, the most notable of these being with Nan Britton, a woman completely enamored with Harding and 31 years younger than him. Not known to the public at the time and unconfirmed until 2015 was the illegitimate child he had with Britton, who published her account in a book, The President’s Daughter.

More sex-related scandals would be revealed after President Harding’s death, including an incident in which a prostitute died after being accidentally knocked unconscious at a party the president attended. The whole incident was covered up and the prostitute was buried in a common grave.